Yuvraj Singh names his favourite actor to feature in his biopic 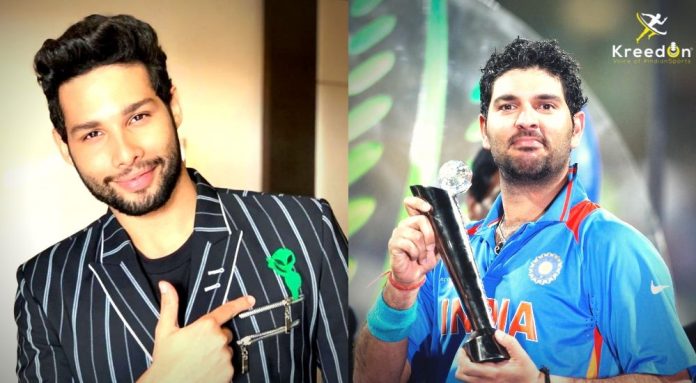 With a plethora of sports movies coming, Yuvraj Singh has jumped on the band wagon of a biopic on his life as well. And while doing so, he also named the actor who can play him – Siddhant Chaturvedi.

The talented actor rocked the scene last year by debuting as MC Sher opposite Ranveer Singh in Gully Boy and has an experience playing the role of a cricketer in Amazon Prime’s series Inside Edge.

In the series, however, he is shown to be a timid and innocent cricketer who hails from a small town. In his journey as Prashant Khanoujia the character is subjected to bullying by senior team members and at the same time a lot is expected of the young cricketer.

In contrast, MC Sher from Gully-Boy is a character that is shown to be supportive of a budding hip-hop artist from the slums of Mumbai.

His honest acting has caught the eyes of many producers and directors. So if a biopic were to be made about Yuvraj Singh, the fact that the two have similar looks would work well in Chaturvedi’s favour along with being backed by the star cricketer.

As for the real life star, Yuvraj retired from all forms of Cricket in June last year. He has recorded some of cricket’s finest moments in the history for which he will be remembered for generations to come.

His off field battle against lung cancer and making a strong comeback on the field showed the world his mental strength. To watch his journey being portrayed on screen, we are all in.

KreedOn Network
We are a team of sports writers who research about sports in India day in day out. Please reach out to us in case of any specific requirement of digital services on [email protected] .
Previous articleCoronavirus Update: Should 2020 Tokyo Oly’ be cancelled? People speak…
Next articleCoronavirus vs Sports Live: Latest Updates of COVID-19 affecting sports events

“There won’t be another Yuvi!” Fans bid emotional farewell to Yuvraj

Cricket World cup 2011 Indian team: Where are the winners now?