The most impressive thing about cricket is that anyone can make it big in the game, provided one has talent and passion. Many would argue that getting the right opportunity at the right time also plays an important role in whether you become a successful cricketer or not. And that argument is not false. It’s only that talent and passion outweigh opportunity by a huge margin. Yet not convinced? Well, Yashasvi Jaiswal story might well do!

An 11-year-old youngster from a financially challenged background in Uttar Pradesh runs away from his home to Mumbai to live his only passion in life – cricket. He plays cricket in the day, sells ‘Pani Puri’ during the evening and sleeps under a tent in the night. Repeats this process over and over. Five years later, the youngster makes it to the U-19 Indian Team and is bought by an Indian Premier League (IPL) team Rajasthan Royals for a whooping ₹ 2.4 crores.

This is not a plot from some Bollywood movie!

The is the real-life, rags to riches tale of Yashasvi Jaiswal and how he achieved so much in just under 18 years of age.

Yashasvi Jaiswal was born on 28 December 2001 in the small town of Suriyawan, Bhadohi, Uttar Pradesh. Hailing from a family of six children, hardships were always there for young Yashasvi. But that wasn’t much of his concern.

The cricket bug had bit Yashasvi in childhood itself. He idolized Sachin Tendulkar and wanted to become a batsman like him. And that was his biggest concern- the lack of cricket played in his neighborhood. “There wasn’t much cricket played in my village,” he said in an interview.

But Yashasvi’s solution to this issue will blow you away – he decided to migrate to India’s financial capital and cricket Mecca – Mumbai. “I’d heard a lot about how Sachin [Tendulkar] sir and Wasim sir excelled in Mumbai. So I wanted to come here and do the same,” he remembered.

And as they say, if your intentions are pure, the almighty will help you in achieving them. A golden opportunity arose when his father, Bhupendra Kumar had some work in Mumbai, and Yashasvi happily obliged to accompany him.

Like thousands of others who come to the city with a handful of dreams, he arrived in Mumbai in 2012 and started to live in the bustling area of Dadar in his uncle’s home.

However, he had to soon move out owing to the lack of space.

“My uncle’s house wasn’t so big that I could stay there long term, so I began living in a tent.”

Also, Read | How to make it to NCA? Here’s the complete guide

Jaiswal’s interest in cricket led him to join cricket sessions in Azad Maidan, Mumbai. Initially, he started playing in a casual form before taking the game seriously.

After some time, he came closer to the ground near Kalbadevi but had no place to stay. A dairy shop owner let him stay at night for menial jobs.

Quite evidently, passion can change everything in a person’s life. Yashasvi had that in oodles and dreamt of achieving what he came for. In an unknown place, far away from family yet passion drove him to what he has done now.

Yashasvi’s time at the diary shop wasn’t long-lived, as he dedicated more time towards cricket. He lost his place in the dairy shop. These were tough times with no place to stay.

But success was written in his destiny; he managed to get a place in the Muslim United Club’s groundsmen’s tent.

Cricket occupied a major part of his time, but money had become an issue. Jaiswal started helping out a food vendor and worked in the tent serving food, sometimes even to his teammates. He, later in a report told that it felt “terrible” but he accepted it because the situation demanded so.

Things were going wayward over time; opportunities to play were looking bleak, monetary constraints were higher than ever and cricket was seeming to take a backseat in Yashasvi’s life. But, if these situations did not happen, there would not have been a word called “life-changing” incidents. One such was the entry of Jwala Singh, a cricket coach.

Someone who has churned out talents like Prithvi Shaw, Jwala Singh came like an angel in Yashasvi’s life. He took the youngster’s responsibility, provided him with a place to stay, and took his legal guardianship and power of attorney. But most importantly, he started nurturing the immense cricketing potential within the little boy.

Just like every person who has made it big in this world, there was someone who played a huge role in making that happen. Jwala Singh, silently worked behind the scenes while Yashasvi rose up the ranks of Mumbai cricket.

Yashasvi Jaiswal is one of those players who likes to play long innings. According to his coach, “He was 11-12 years old when I first saw him bat. I was immediately impressed by his performance and he was playing against Division A bowlers with ease.”

In an interview after the U-19 Asia Cup, Jwala Singh, while commenting on Yashasvi’s batting exploits, said “In the last three years, he has made 51 centuries and has taken 200 wickets. He’s got a habit of making big scores.”

Such achievements cannot be ignored but the one which threw him in limelight was his knock in the 2015 Giles Shield. It was a breakthrough year for 14-year old Yashasvi. He scored 319* and took 13/99 in a match and entered the Limca Book of Records for most runs and wickets taken in a match.

Just like a new bird that loves its maiden flight, Yashasvi was experiencing his own. Under his coach’s able guidance, he quickly rose the ranks and was selected in the Mumbai U-16 squad.

And having come to Mumbai to play for the city like his idol Sachin Tendulkar, this new opportunity was a dream come true for the youngster.

Now in Indian cricketing circles, if you shine for Mumbai, India’s mecca of cricket, you are one step closer to an India call-up.

Donning India colours was a matter of time after that and he was in the U-19 squad for India’s tour of Sri Lanka. 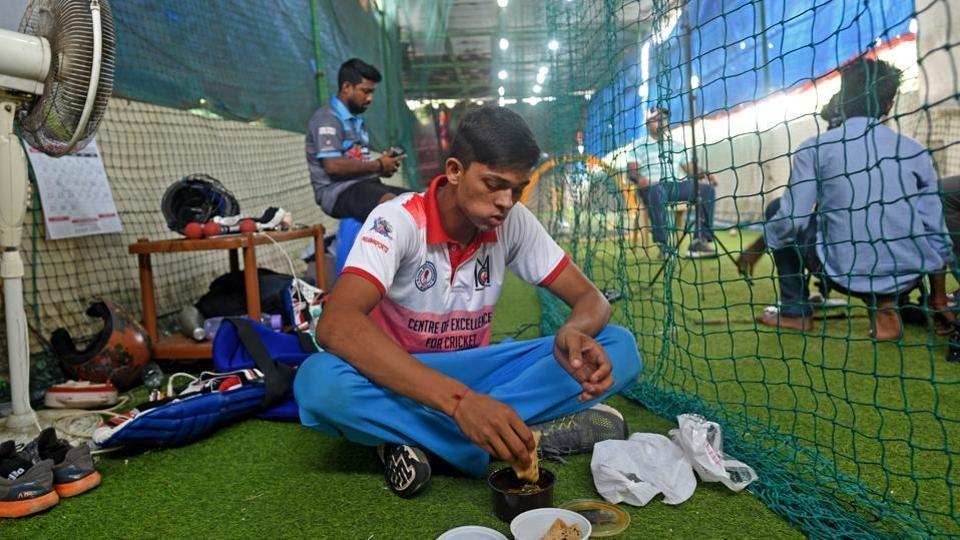 But being too young might have hurt him and nerves got the better of him. Failing to make it count with scores of 15 and 1 in the first two matches, he hit back with a ton (114) and cemented his place.

The 2018 U-19 Asia Cup was the turning point of his life. He started with hundred and ended up scoring 318 runs, the highest in the tournament, leading India to victory. In his first Youth test debut, he hammered a 173 and led India to a win. Further, he scored four half-centuries against England and Bangladesh in a tri-series that year.

With consistent performances in age-group tournaments, Yashsvi was ready to make it to the big league.

His senior career kicked off with his first-class debut for Mumbai in Ranji Trophy on 7 January 2019 against Chattisgarh. 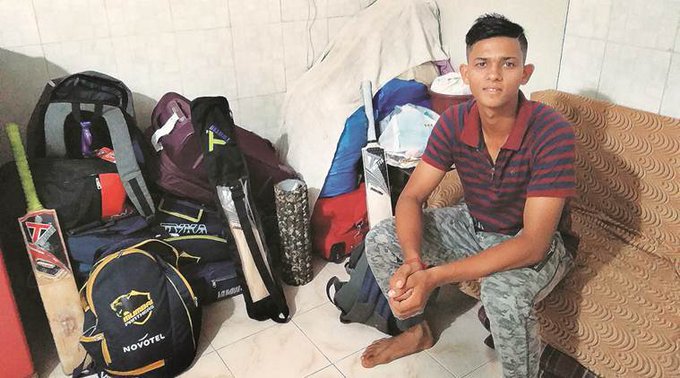 But just like every other person, there was a moment, yet to arrive would have changed his life for the good. The 2019 Vijay Hazare Trophy was there.

After a couple of good knocks in the first few matches, it was time for the big one. He recorded a 203* with 17 fours and 12 sixes against Jharkhand and became the youngest List A double centurion. Being the only third cricketer to make a double ton, Yashasvi’s happiness knew no bounds.

He said, “I never thought I’d play a world record knock. I came to know about it [record] after the game. For me, my team’s win is the most satisfying aspect.”

Gaining success in domestic leagues and age-group international tournaments were one thing, but cracking the IPL is just another level. The “rags”-to-“riches” story was just incomplete.

Yashasvi Jaiswal was drafted into the uncapped list in the 2020 IPL Auctions. However, the youngster skipped watching the event, maybe because he did not have high hopes or had a fear of being rejected. But the teenage prodigy’s exploits were indeed recognized and how! From a base price of ₹ 20 lakhs, the Rajasthan Royals paid him a price of ₹ 2.4 cr.

The youngest ever to hit a double hundred in List A cricket 💯💯
Yashasvi Jaiswal AKA wonder kid, welcome to the Indian Premier League🤗#IPLAuction #YashasviIsARoyal pic.twitter.com/7bnmYKTuMw

Caught back in surprise and excitement, he said, “I had decided not to watch the IPL auction and went to meet my net mates at Kalina. But someone who was following the auction on his mobile at the ground delivered the news to me that I was bought by RR. Suddenly, all the cricketers there started celebrating and congratulating me. I never expected this huge amount.”

A coach’s role becomes invaluable, and so was Jwala Singh’s. Understanding the scale of this big moment, he said, ” I am delighted that Yashasvi got picked to play in the IPL because it’s a very big stage and that too selected in a friendly team like Rajasthan Royals, who are known to support and give opportunities to young cricketers.”

If the 2020 U-19 World Cup is remembered for a player, it has to be Yashasvi Jaiswal. After all, the youngster has been in such a sublime form throughout the tournament. Just a look at his numbers in the competition will help you understand why we say this – 29*, 57*, 62, 105*.

The last one, particularly, is the sweetest one, since it came in the semifinal against India’s fiercest rival Pakistan. In fact, Jaiswal, in partnership with fellow opener Divyaansh Saxena, literally made a mockery of the miser target of 172 that Pak. With the ten-wicket victory, the youngster guided India into the finals of the competition in the most confident way possible.

What is Yashasvi Jaiswal IPL price?

Yashasvi Jaiswal was bought by Rajasthan Royals for INR 2.40 Cr ahead of the IPL 2021.

Glad to have got on the pitch and given my best for the team! We move on to the next game ⏭ pic.twitter.com/ltDNlG7y1D

One of the proudest moments of my life, not so because I was celebrating a win, but because it was for my country. Wishing everyone a Very Happy 74th Independence Day. #ProudIndian #JaiHind 🇮🇳 pic.twitter.com/CiDmbLDTjV

#Throwback to the time when my dream like every other budding cricketer in this country came true & I got to spend time talking with @sachin_rt sir.

The things we discussed,I will always keep with me and remember them.Looking forward to more such interactions in near future sir. pic.twitter.com/LYZMH0TUi2

Top 5 Youngest Player in IPL of All Time