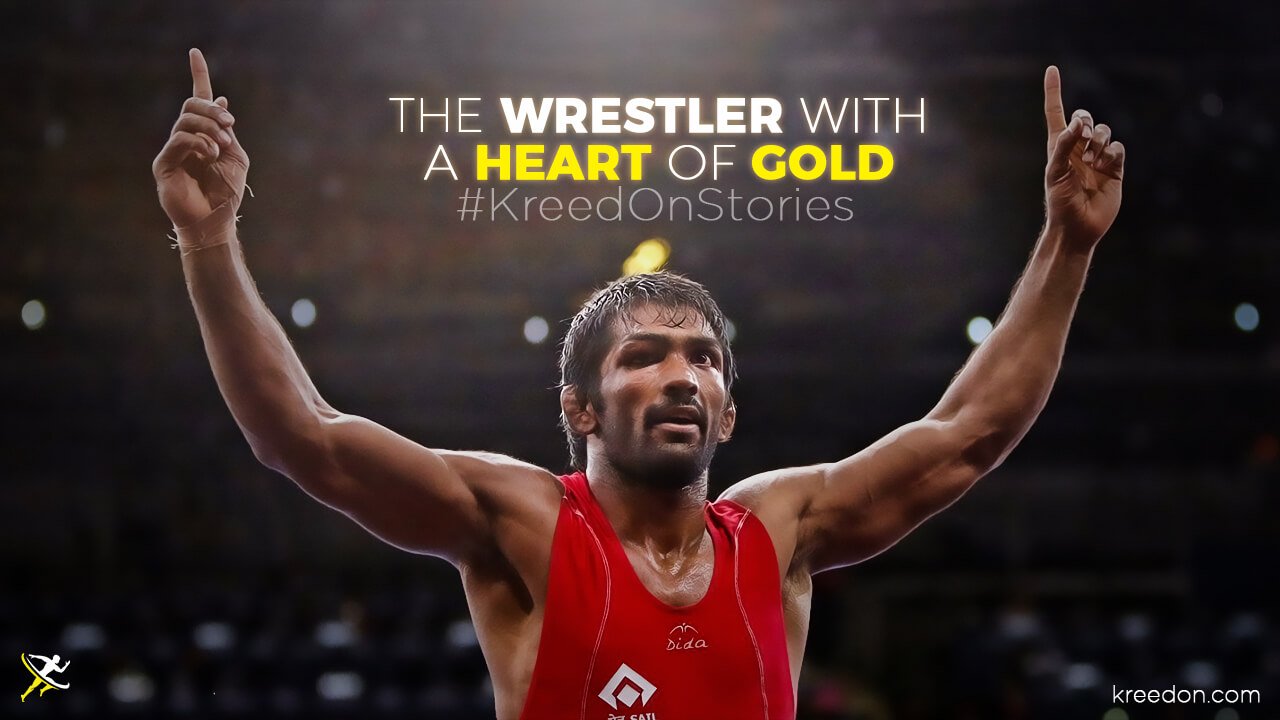 Wrestling as a sport has a tremendous fan following in India. The sport has deep Indian roots and has connections to the country’s glorious heritage. Right from the times of Great Gama to KD Jadhav and Sushil Kumar to Yogeshwar Dutt, India has always been at the forefront of wrestling competitions around the globe.

In India; be it metro cities like Delhi and Bengaluru or remote villages of Maharashtra and Haryana, everyone knows about wrestling. Indians are not just fascinated by the bulky nature of the wrestlers, but involvement in the game is such that every big championship is watched with utmost focus. Pro Wrestling League is a prime example, of how many Indian fans like wrestling.

Till date, there have been many great wrestlers who have represented India in the mud sport. However, only a handful of them could manage to register their names in the history books. One such wrestling powerhouse is Olympic medallist, Yogeshwar Dutt.

Yogeshwar Dutt grew up in a remote village of Bhainswal Kalan in the Sonipat district of Haryana. His father, Rammer Dutt, was a farmer, while his mother Sushila Devi, a homemaker. A young ‘Yogi’ was attracted to wrestling since childhood and was introduced to the game at age of eight.

The Bhainswal village in Haryana had a tradition of wrestling. Yogeshwar Dutt learned the techniques of Indian wrestling in the ‘akharas’ or wrestling mud rings of his village. The young Yogi got his inspiration from Balraj Pehlwan, one of India’s most acclaimed Indian wrestlers, who was from his native village. Yogeshwar was trained under the guidance of coach Rampal.

Who could have imagined that one day this shy boy from an isolated village of Haryana would represent India at the Olympics!

“Haryana Has A Strong Wrestling Culture Coupled With Robust Infrastructure And That Is Why We Keep Churning Out New Talents.” – Yogeshwar Dutt 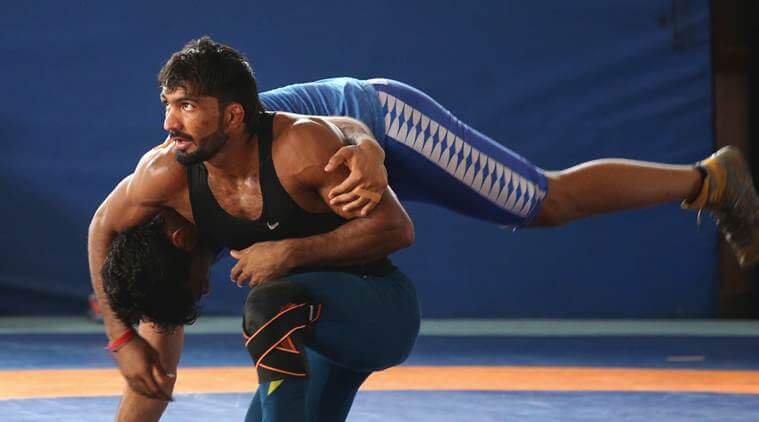 Yogeshwar Dutt lost many school bouts in his early days. But the young Haryanvi lad didn’t lose hope and put in more effort and hard work to win an Olympic Medal.

Wrestler Yogeshwar Dutt won his first-ever international Gold medal in the year 1994. He participated in the International School Cadet Sports Competition held in Poland. After his win, Yogi’s parents saw the spark in their son. They were sure that one day he will represent India at the world level. In the year 1996, after completing his education, Dutt came to Delhi’s Chhatrasal Stadium to make a career in wrestling.

The biggest success in his young career came in the year 2003. Yogeshwar Dutt won the gold medal in the Commonwealth Wrestling Championship held in London. After this gold medal-winning feat, Yogeshwar never looked back. In 2004, Yogi was selected for the Athens Olympics. But, the Commonwealth wrestling champion failed to make it big in Athens.

A solute to his dedication

In 2006, Rammer Dutt passed away on 3 August 2006. This was just nine days before Yogeshwar Dutt participated in the Asian Games held in Doha. Yogeshwar got the news of the demise his father at the Asian Games. But this didn’t stop the focussed Indian freestyle wrestler to back out from his bouts. In Fact, he fought so hard that he won the bronze medal for the country.

“Wrestling Is A Sport, Where A Lot Of Decisions Are Very Close And Decided In The Final Seconds Of The Bout.” – Yogeshwar Dutt

The timid Indian freestyle wrestler from a remote village of Haryana became a national hero in one night after he won the bronze medal at the 2012 London Olympics. Even though Yogeshwar Dutt was not able to repeat his London heroics at the Rio Olympics 2016, yet the wrestler’s journey from the mud-covered rings of his village, to representing his nation at the highest level is not less than an inspirational movie.

At the 2016, Rio Olympics, the wrestler was out of the games in the opening round after losing to Mongolian Ganzorigiina Mandakhnaran. Putting some light on the current status of the wrestler, it is speculated that Yogeshwar Dutt will participate, in both the Asian and the Commonwealth Games 2018.

The Haryanvi lad made his Olympics debut at the 2004 Olympics in Athens. In Athens, Yogeshwar was at the 18th spot in the freestyle category. Training hard over the course of four years, Yogeshwar made it to the quarter-final of 2008, Beijing Olympics. But the year 2012 was his golden moment. He showed the world that he can achieve greatness with his powerhouse performance in the 2012 London Olympics. After thrashing Ri Jong-Myong of North Korea, Yogi bagged a bronze medal in the 60-kg freestyle event.

READ | The Evolution Of Women’s Wrestling In India; The Past And The Present

With his Bronze-winning feat at the London Olympics, Yogeshwar Dutt became only the third Indian wrestler to get an Olympic medal. Known as the father of Indian wrestling, KD Jadhav gave India the first-ever wrestling medal at the 1952 Olympics. After him, Sushil Kumar went one step ahead and became a double Olympic medallist by winning the medal at the 2008 and 2012 Olympics games.

Yogi’s performance at the London Olympics was a special one. Just two years before, at the 2010 Commonwealth Games in Delhi Dutt had gone through a career-threatening knee injury in the final match. Even after such a career-ending injury, he won the gold medal in the 60 kg category.

Due to the injury, he was out of the game for a couple of years but staged a grand comeback at the highest sporting event in the world in style.

Yogeshwar Dutt: The Nationalist that we know today

Yogeshwar Dutt is very popular on Twitter and through the social media site often puts his views forth, other than wrestling.

His love for the nation: As mentioned earlier being a sports person, Yogi has all the nationalistic feelings. Patriotism is his biggest motivator. His inspiration came by reading biographies of patriotic leaders like Subhash Chandra Bose, Chandrashekhar Azad, Bhagat Singh, and Jhansi ki Rani.

Highly Spirituality: Becoming wrestling has aided Yogi’s spiritual side as well. He carries forward the great Indian legacy of the ‘akhara’, by carrying a Bajrang Bali idol everywhere he goes. He offers prayers to Hanuman Ji every time before entering the mat.

A Determined personality: Wrestling was, is, and will be his life. Also, his determination in pursuing his passion is unwavering and awe-inspiring. Former Indian hockey captain, Viren Rasquinha, recently tweeted a video of Dutt. He was dangling heavyweights from his neck. He tweeted, “I’ve never ever seen anyone doing neck weight exercises like this.”

Gritty and Resolute: Right from his first Olympic appearance in 2004 at Athens, he continuously learns from his past mistakes, rectifies them, and improves it in his game. It is this very quality that won him a medal in London.

Yogi’s Role Model: Yogi as a youngster was highly motivated by watching Leander Paes winning the bronze medal at the 1996 Atlanta Olympics. This inspired him to win an Olympic medal for the country. In wrestling, his inspiration has always been Balraj Pehlwan, who was from his native village.

If we look at his personal life, Yogeshwar Dutt, as a wrestler has set an example for everyone. He took just a rupee in dowry at his wedding. He projected this to stop the malicious practice.

The athlete hanged his boots in his prime to focus on fellow wrestling superstar Bajrang Punia‘s training. Punia is considered as a major medal hope for India at the Tokyo Olympics 2020 and who can be a better guru than Yogeshwar Dutt?

As the duo prepare to achieve glory in 2020, we wish them the best of luck. Yogeshwar Dutt is an inspiring figure and we hope that he keeps on being the goodwill ambassador of the legendary sport of Wrestling.

Raghav Heda
Raghav is a sports enthusiast and a content writer at Kreedon. Being a former state-level cricketer and Captain of the Basketball team at IIT Patna, he understands the problems faced by a student-athlete in India. He is also a die-hard NBA fan and has been following the league and American Sports Media for long. Comparing the Indian sports economy to American Sports' was something that motivated him to work for the development of Indian Sports.
Previous article
IPL 2018 Dates – The Mega Cricket League to begin on 7th April
Next article
Indian Army Athletes who made India Proud!