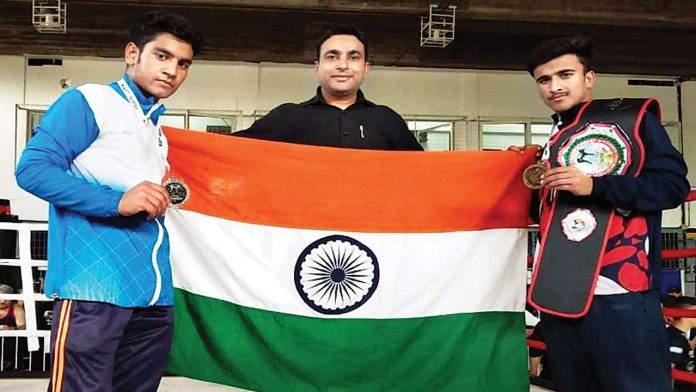 The 15-year-old class X student won the medal in the 52kg category in Argentina.

Aabid Hamid has made the country proud by striking a gold at the World Kickboxing Championship in Argentina. The class X student from Army Goodwill School, Hanzik was part of 9-member Team India. Although he was the lone gold medal winner for the nation, the eight other members of the contingent won silver medals at the competition. Those included three from Kashmir.

The cherry on the cake for the northernmost state of India was the fact that sole girl in the 9-member team hailed from Kashmir as well. She is Aabroo Bashir, a Class IX student from the bordering district of Bandipora in Northern Kashmir. Bashir clinched the grey metal at the Championship.

“Aabid had a dream run in the Championship and bagged gold by outperforming his opponents. In the closely contested finals, Hashim, Abroo and Irshad Ahmad Ganie bagged Silver medals after losing by slender margins,” an army official was quoted after the event.

The gold-medalist Aabid Hamid and Hashim Ashraf have earlier represented the country at the Wushu Stars 2017 competition hosted by Moscow, in November 2017. In the tournament, Hashim Ashraf had bagged the silver medal.

The Indian Army needs a special mention here, as it was the institution that sensed potential in the two martial arts stars, Hamid and Ashraf, at the Army Goodwill School.

The duo’s interest in sports and Martial Arts convinced the Army decided to invest and support the students from the schools, especially to whose from a humble background.

On the other hand, Irshad Ahmad and Aabroo Bashir, among others, were supported financially by the Bandipora’s district administration after the duo had qualified for the worlds.

“It is a big honour for Kashmir that all the four players have won medals for the country. The biggest honour is that the only female who represented India hails from Kashmir,” the state kickboxing team’s coach Faisal Ali Dar said.

Dar also added that the winners would inspire many parents to send their wards to participate in the sports events after the players’ triumph at the tournament. “Parents will now be motivated to allow their kids to participate in sports”, he informed.

Prior to the incredible win, Tajamul Islam became the youngest Kashmiri girl to clinch a gold for India in the World Kickboxing Championship in Italy in 2016. She was just in class II at the Army Goodwill School when she took part in and won the competition.

Monish Gadiya
Monish Gadiya is the Head of Content at KreedOn. He is a thorough tech-enthusiast and believes that innovation is the answer to all the problems prevalent in the society. Monish graduated from University of Pune with a degree in Civil Engineering before pursuing a post-graduate diploma course in intellectual property rights. A die-hard football fan, he has represented his college at various football competitions.
Previous articleSaurav Ghosal Clinches Kolkata International Title after Defeating Zahed Salem
Next articleHarmanpreet Kaur: Top Five Famous Knocks of India’s T20 Captain