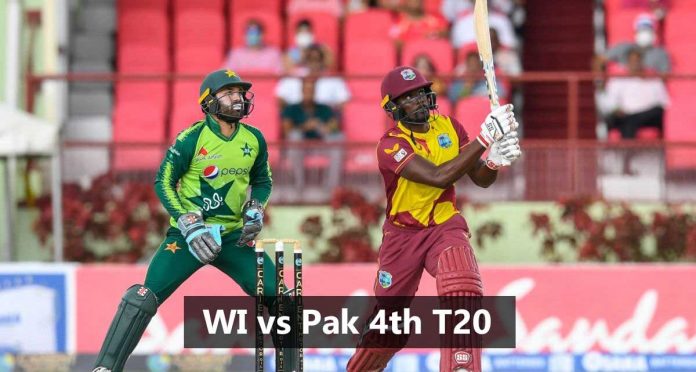 WI vs Pak 4th T20 Dream11 Prediction: The scoreline of the series so far is Pakistan-1, West Indies- 0, and Rain-2. The third T20 of the series was also washed out due to rain, and the series is still tilted towards Pakistan. To get a result of this series, Pakistan will have to win this final match. If West Indies wins the match, the series will have joint winners.

Pakistan is playing good cricket, and the key players that were expected to perform have lived up to the expectations. These players still have a job in hand, that is to win the match and the series. If they win this one, their confidence will be very high going into the T20 World Cup.

West Indies still needs to save this series. They have a quality set of players, who time and again have won their team matches. They need to strategize correctly and not let Pakistan settle in. If players like Rizwan and Babar Azam settle in, they can take away match from any team.

Nicholas Pooran- His form in the IPL was not very pleasing. He scored just 28 runs in the 7 matches that he played, but after that, in the International matches, he performed well. In the recent series against Australia and the 2nd T20 against Pakistan, he was the most consistent player.

Mohammad Rizwan- Rizwan has had a great year so far. He performed well in the PSL and after that in the series against England as well. He has been striking the ball with good power and scoring runs at a quick rate. His good form has continued in this series too.

Shimron Hetmyer- His batting style perfectly compliments the West Indies team. He watches the ball and plays it with all the power, which more often than not gets him the desired results.

Sohaib Maqsood- Maqsood was a good find for Pakistan in the PSL. He can score big runs in crucial moments. This will be a test for him on this type of wicket.  He did not have a lot of time in the middle in the 2nd match, but this could be different for him.

Babar Azam- He is the most reliant batsman in the Pakistan squad. He has been in good touch and is playing with maturity. He is playing according to the situation and the player on the other end. He played a captain’s knock in the 2nd match and would want to do the same in the final match.

Chris Gayle- He might once again get a chance to open the innings, and there is no one better than him to do this job. He will now have more time to show his game and smash more sixes out of the park.

Kieron Pollard- The role of captaincy is suiting him well, and he is getting the results for his team. His performance with the bat has not been consistent, which seems to be changing in this series.

Jason Holder- He is not usually considered a genuine T20 player, but if given an opportunity, he can be a proper T20 all-rounder. His performance in the 2nd match with the ball is proof of that.

Hasan Ali- His form in the recent past has been of match-winner. He has been very economical and is also picking up wickets. He is the leader of the bowling attack and needs to take wickets in this series.

Hayden Walsh- He is a promising young talent, who can take wickets. With all the experienced players around him, Walsh will have a lot to learn and make a place for himself in the upcoming T20 World Cup.

Haris Rauf- He has come in place of Shaheen Shah Afridi in the playing XI. Rauf has a good pace, but how smartly will he bowl on a slow wicket will set him apart from the other bowlers.

KreedOn Network
We are a team of sports writers who research about sports in India day in day out. Please reach out to us in case of any specific requirement of digital services on contact@kreedon.com .
Previous articleIndia At Tokyo Olympics 2020 | PV Sindhu and Pooja Rani fell short of victory
Next articleBangladesh vs Australia 1st T20 Dream11 Prediction

KreedOn Sports Buzz: Do you know Esports is all set to...