Viswanathan Anand Manages to Scrap a Draw against Robert Hess 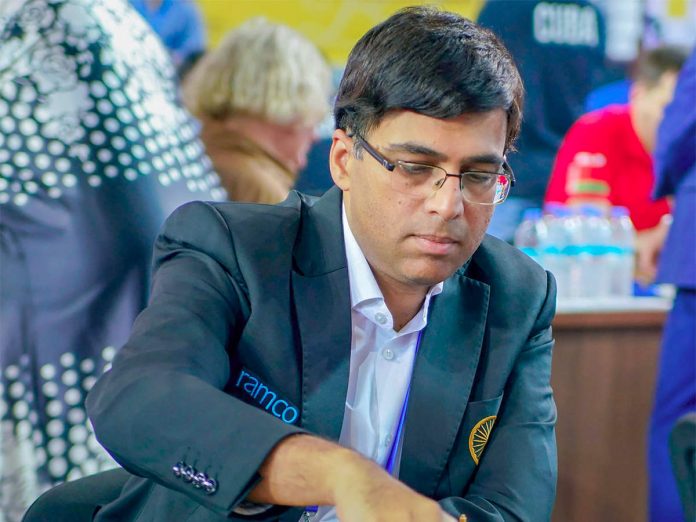 Former World Champion Viswanathan Anand again seemed to struggle for the second day in the competition, as he was held to a draw by United States’ almost-retired Robert Hess in the second round of Isle of Man International Chess tournament yesterday.

The Isle of Man International has a reputation for being one of the strongest open chess tournaments. Agreed, world’s top 4 ranked players gave the event a miss, but the tournament still boasts of some of the best minds, including the remaining 6 best players out of the top ten. And to prove this, the Isle of Man International did have some interesting matches up its sleeves in the opening rounds.

On Sunday, Anand almost lost to 13-year old International Master Raunak Sadhwani in the first round. It was for the inexperience of the youngster, that Anand escaped an embarrassing defeat mid-game. He had to dig in until the 30th round to win against Sadhwani.

In the second round as well, the South Indian champion struggled to find his form and again embraced a defensive approach towards the end of the match.

Anand had to face a French defence with white. He simply could not get much with a tiring rook and pawns endgame and a pawn less. It was evident that the Indian would have to defend for a long time. In the end, he salvages out a draw after 78 moves.

Upsets – The flavour of round two at Isles of Man

Upsets continued to mar the Isles of Man tournament and most of the action involved the Indian contingent.

Among the top of this list was Grandmaster V. Vishnu Prasanna, who defeated a 200-points above rated Israelite, Tamir Nabaty.

Joining him was Grandmaster-in-making Harsha Bharthakkoti. Bharthakkoti defeated his fellow Indian and higher ranked S P Sethuraman in what was easily the game of the second round. Harsha was at his attacking best, targeting Sethuraman’s king right from the start. He did the trick with a brilliant sacrifice of his queen.

Vidit Gujrathi, another talented chess master, himself made another the tactics books richer by defeating against fellow compatriot, Debashish Das. Vidit was successful in bringing all his pieces together against a disappointing black king.

Tania Sachdev gave Hungarian Peter Leko a tough time in the previous round but found Grandmaster R Praggnanandhaa a much tougher nut to crack. The game ultimately concluded in a draw as the former world championship candidate could not make any progress.

In a high profile match, Maxime Vachier-Lagrave of France defeated Abhimanyu Puranik. S Kidambi’s great start to the tournament hit a setback against Hikaru Nakamura of the United States. Kidambi had managed to draw with Russia’s superstar chess player, Vladimir Kramnik in the first round.

Monish Gadiya
Monish Gadiya is the Head of Content at KreedOn. He is a thorough tech-enthusiast and believes that innovation is the answer to all the problems prevalent in the society. Monish graduated from University of Pune with a degree in Civil Engineering before pursuing a post-graduate diploma course in intellectual property rights. A die-hard football fan, he has represented his college at various football competitions.
Previous articleSmriti Mandhana And Harmanpreet Kaur Brings Victory For India A
Next articleISL 2018: Speedy Bengaluru FC Beat Hapless Pune FC By 3-0

How to win Chess in 3 moves? Explained in Simple Steps- kreedOn

Why the career spans of players getting Shortened? | KreedOn- Sports...