Captain of the Indian cricket team, no.1 ODI and Test batsman, fastest to 20,000 international runs, most consistent run machine, and what not, Virat Kohli is undoubtedly the poster boy of Indian sports. He has been an inspiration to millions of young cricketers around the world. But none of this would have been possible without the unconditional support from his family. In fact, it was his father who noticed signs of the rare talent in his game at the minor age of 3 and encouraged him to pursue it seriously. Let us know more about each member of the Virat Kohli family and how they helped their champ become a legend. 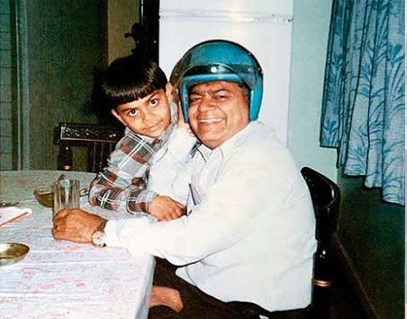 Virat is the youngest son of late Prem Kohli. Born in the Punjabi Khatri family on 5th November 1988, Kohli was a cute chubby kid always. Prem was a criminal lawyer by profession and was the sole provider in the family. He recognized his youngest son’s talent and interest at a young age. A 3-year old Virat would pick up the bat and ask his father to bowl at him. It was then that he saw the bright future for his young son. In fact, he enrolled Virat in the West Delhi Cricket Academy when he was nine years old. Virat trained under Rajkumar Sharma at the academy and also played matches at the Sumit Dogra Academy.

Prem was the biggest support in his life before his untimely death in 2006 due to a brain stroke. The 18-year old Virat still played in the Ranji match the very next day as he had to live the principles taught by his late father. He ended up scoring a match-saving knock of 90 runs for Delhi against Karnataka. When asked about this incidence later in life, Kohli’s response to NDTV was:

“I still remember the night my father passed away as it was the hardest time in my life. But the call to play the morning after my father’s death came instinctively to me. I called my (Delhi) coach in the morning. I said I wanted to play because for me not completing a cricket game is a sin. That was a moment that changed me as a person. The importance this sport holds in my life is very, very high,” 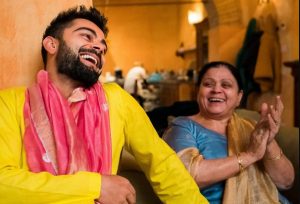 While Prem was out fighting criminal cases for his family, Virat’s mother Saroj Kohli was the one to take care of the house and the kids. After the untimely death of Prem Kohli, Virat’s family plunged into a financial crisis. Saroj ensured to take care of her kids in the right direction, helping them come up from the tragic loss single-handedly. Being a single parent from there on, she did a great job in keeping the family together while each member went on towards their career heights.

The eldest among the 3 siblings, Bhavna Kohli is among the most influential figures in Virat’s early years. Bhavna is happily married to Sanjay Dhingra with 2 children, Mehak and Ayush who are pretty close to their mamu, Virat. The 2 kids even make a frequent appearance on Virat’s social media handles.

Throwback to fond memories with @bhawnadhingra2 Didi 😊
Wishing a very Happy #Rakhi to all the sisters around the world. #Rakhshabandhan pic.twitter.com/ZaBwuqaDNu

Virat’s companion to the academy in his early years and his guide through his rare low performances in the early cricketing days, Vikash Kohli has been with him as an ideal big brother. Vikash is married to Chetna and has a cute son named Aarav Kohli. Virat can be seen sharing some off-time at home, apart from cricket with his nephew Aarav. Vikash and his family can also be seen supporting the RCB squad during the IPL seasons.

Virat Kohli is married to the famous Bollywood diva and one of the most popular actresses in the current Hindi Film industry, Anushka Sharma. The duo started dating in 2013 and soon earned the celebrity couple nickname “Virushka”. The two never publicly talked about it and kept it to themselves until the couple married on 11 December 2017. It was a private ceremony in Florence, Italy with just close family members and friends. Their amazing wedding pictures and cheerful love bond raised the standards of couple goals throughout India.

The Indian captain has credited his wife for the emotional strength and maturity in his behavior that he has learned from her. Virat and Anushka are some of the most recognizable and followed couples of the country. In fact, big brands like Manyawar, Google Duo, etc have even built marketing campaigns with 2 stars with many popular TV advertisements.

Was a joy shooting for this, #PureFun!
Check out the new Shyam Steel ad for their TMT bars made from #PureSteel.@AnushkaSharma @shyamsteel#PureLove #ShyamSteel #TMT pic.twitter.com/f9K9X7jhy3

Raghav Heda
Raghav is a sports enthusiast and a content writer at Kreedon. Being a former state-level cricketer and Captain of the Basketball team at IIT Patna, he understands the problems faced by a student-athlete in India. He is also a die-hard NBA fan and has been following the league and American Sports Media for long. Comparing the Indian sports economy to American Sports' was something that motivated him to work for the development of Indian Sports.
Previous article
Gagan Narang explains why CWG’s shooting snub is good for India…
Next article
Jyothi Surekha Vennam biography | Age, weight, archery, achievements

Unbelievable! Virat Kohli Has been Fined by ICC for Doing This…