He is a true fighter. Here is the complete Vikas Thakur Biography…

A simple boy from an ordinary family rose to extraordinary heights with persistent hard work and belief in his talent. Armed with the support of his family and natives, he knew nothing could stop him. In spite of limited resources at his disposal, he achieved glory. But this is just the beginning, the journey has truly begun now and the golden pinnacle awaits.

Of course, it hasn’t been a smooth sail, but a smooth sea never made a skilled sailor, isn’t it?! From lack of facilities to injuries, he has been through some really tough times. Every time life put another obstacle his way, he overcame it and came up stronger. He has repertoire of bronze and silver, the gold still eludes him. Not for very long! He has set his eyes on the yellow metal and is ready to give it all!

A post shared by Vikas Thakur weightlifter (@vikas_thakur_weightlifter) on Apr 10, 2018 at 9:29am PDT

Vikas Thakur announced his arrival on the international stage with a sparkling silver medal at the Commonwealth Games 2014. He won the silver by lifting 333, which included 150 in snatch and 183 kg in clean and jerk. He narrowly lost the gold to New Zealand’s Richard Patterson who lifted 335 kg (151 + 184).

His victory delighted not just his proud family, or beaming village, but the entire country! He was welcomed back by BJYM activists and villagers in style. People danced and celebrated the achievement of their son.

In the year 2015, Thakur broke the National record in men’s 85 kg. The earlier record was set by Takinder Singh of Punjab in 2001. Finally after 14 years, Thakur broke the record with a snatch of 153 kg. He also scored stunning 186 in clean and jerk.

A post shared by Vikas Thakur weightlifter (@vikas_thakur_weightlifter) on Apr 8, 2018 at 4:54am PDT

Vikas lifted a total of 351 kg with 159 kg in snatch and 192 kg in clean and jerk at the Gold Coast Commonwealth Games 2018. He won the bronze medal much to the delight of the entire country. He lost out to Steven Kari from Papua New Guinea (370 kg) and Boady Santavy from Canada (369 kg). His victory was celebrated by his friends and family. He was welcomed at the railways station and got the hero’s welcome that he deserved.

More glory thanks to our weightlifters. Congratulations Vikas Thakur for the Bronze in the men's 94kg event. You have brought smiles on the faces of all Indians: PM @narendramodi #GC2018 pic.twitter.com/IDM7JVSoeF

In an interview with the Times of India, Thakur expressed his disappointment over the lack of support from the government. Though many schemes and support initiatives are declared by the government, these don’t end up actually benefiting the players.

“The government allots funds for players, however it does not reach them. It should identify the source of corruption. The government does not ask, and players do not raise their voice against it. Even if they raise their voice, nobody listens to them. I belong to a middle-class family, and my family supported me in all ways to make me reach this level. However, not all are fortunate enough to have the motivational and financial support of their families, which is why talent remains buried in Punjab.”

It is very heart-breaking to see talented athletes missing out on opportunities due to lack of support. Thakur was nominated for the Maharaja Ranjit Singh Award but did not receive any update about the same.

It was his father who inspired him to pursue a career in sports. When he was just nine years old, Vikas Thakur first started weightlifting. His talent was visible since then. His father is employed with the Indian Railways and is currently working as Mail Express Guard. The family moved to Ludhiana more than three decades back after his posting.

Parvesh Chander Sharma, working with the Ludhiana District Weightlifting and Bodybuilding Club guided and trained Vikas in the beginning of his career. Currently, he is being coached by Vijay Sharma and Sandeep Kumar at the National Institute of Sports, Patiala. 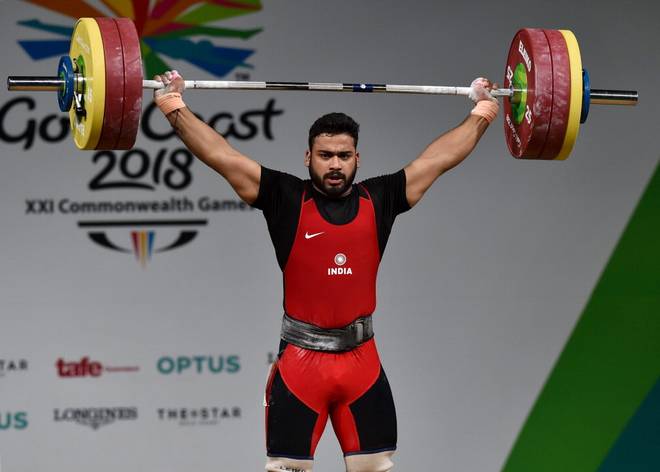 A post shared by Vikas Thakur weightlifter (@vikas_thakur_weightlifter) on Apr 28, 2019 at 9:43am PDT

A post shared by Vikas Thakur weightlifter (@vikas_thakur_weightlifter) on Apr 26, 2019 at 8:15am PDT

A post shared by Vikas Thakur weightlifter (@vikas_thakur_weightlifter) on Sep 24, 2018 at 8:20am PDT

Mamta Thatte
A passionate foodie, a versatile writer, and now a sports enthusiast, Mamta is always open to exploring new avenues. She has a vast experience in Web Content Writing, Editing, and Social Media Management. A self-confessed coffee and dark chocolate addict, she believes in following her heart and giving her 100% into everything she does.
Previous articleFaceApp Challenge: Most Hilarious ‘Old-Looks’ of Indian Players
Next articleJaipur Pink Panthers Team 2019: Players, Records, Sponsors, Owners