Vikas Gowda popularly known as ‘Indian Hulk’ is one of India’s best find in the Discus throw discipline. The powerful athlete is touted to be India’s best hope to win medals at Olympics, if stays fit till 2020.

After Milkha Singh, there were not many who left an Indian hole in the wall of World Athletics. PT Usha and Anju Bobby George were some of the famous personalities who made our nation proud. But in 2014, after a gap of 56 years one man proved his worth by clinching a gold medal in athletics. This was Commonwealth Games and was very special because he became only the second man to win athletics gold for India.

Milkha Singh himself congratulated him and said that  “I feel proud with Vikas’s achievement and with those of our other sportsmen and women who have won medals in Glasgow. I compliment and congratulate them for making India proud. They are the real ambassadors of India and the credit goes to their parents too”.

Vikas knew very well that he is chasing a feat which was achieved by an Indian man a very long time ago and he needs to do it again for the country. He pulled up his energy and technique to show a scintillating discuss throw which reached 63.64m. Better than anyone on the day. 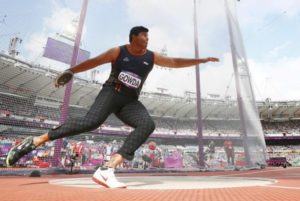 Vikas was born in Mysore, Karnataka 1983. His father, Shiva Gowda, was a competent coach of 1988 Indian Olympic Track team and also the first coach of Vikas. Though he was born in India, he grew up in USA. He has a lot of triumphs under his belt but it all started in 2005 when he won a silver in Asian Championship. Since then, there was not looking back and his journey witnessed a lot of inspirational moments. In 2012, he broke the national record with a mammoth discuss throw of 66.28m and it is still intact. Here is a brief list of all his other achievements.

In his words , the most important award to him remains the “Padma Shri” which he received in 2017 for his remarkable contribution to Indian Sports.

Vikas Gowda while speaking to the media always said that he never relies on atmosphere to motivate him but he gets this inspiration from himself. If one keeps practicing with this ideology everyday, there is always a scope for improvement. And, if one can do it in practice, it is possible in competition too. His progressive career where he broke his own records again and again is a testimony for this. His message to the younger generation is that only hard work and persistence is the way to seek continued success. There are not many like him but we have more such stories such talent.

Vikas Gowda had the best moment of his career when he clinched the Gold for India in the 2014 Commonwealth Games with a throw of 63.64m. This feat made him the second Indian man to win athletics gold, 56 years after Milkha Singh, won the men’s 440 yards at the Cardiff 1958 Games.

After the qualification standard was lowered, he qualified for the 2016 Olympics in the discus, making this his 4th Olympic games.

KreedOn Network
We are a team of sports writers who research about sports in India day in day out. Please reach out to us in case of any specific requirement of digital services on [email protected] .
Previous article
Ajay Malik – The Indian Tennis Prodigy to watch out for!!
Next article
A French Skateboarder is Enthralling Indian crowds – His name Jules Von Cha Cha

PV Sindhu All Set for the World Tour Finals; Says She...