Vijender Singh is perhaps the most famous boxer in India. A true youth icon, he has made his mark like no other. To begin with, right from the beginning of his career, Vijender has brought boxing into the limelight. Moreover, he has explored other pursuits, without ever letting them affecting his real passion. This is exactly what makes him a real star. Vijender’s life has been significantly interesting. From judging a reality show to walking on the ramp, he has done it all. Today, we are going to explore the various facets of our boxing champion.

Vijender was born in a humble jat family from Bhiwani in Haryana. His father Mahipal Singh Beniwal, earlier worked as a driver with the Haryana Roadways. His mother is a housewife. Vijender has an older brother named Manoj. As a matter of fact, Manoj was Vijender’s first inspiration to take up boxing.

Initially, Vijender started training at the Bhiwani Boxing Club. His first coach there, Jagdish Singh, encouraged him to take up boxing as a career. It was during this period that Vijender took up modeling as well. It eventually helped him earn money for his boxing classes. He also completed his formal education and has a bachelor’s degree. 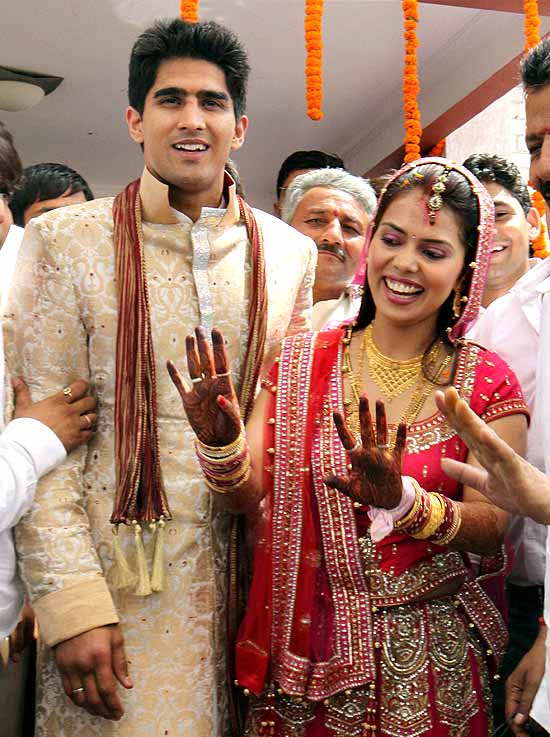 Vijender Singh with his wife Archana

On 17th May 2011, Vijender married longtime friend Archana. His wedding surely broke many hearts! Archana works at the British High Commission in New Delhi. It was a low key wedding with close family and friends. The couple, however, invited dignitaries from sports an politics at their reception. They are blessed with a boy named Arbir Singh.

Vijender made his first mark during the state-level competitions. He won a silver medal in sub-junior nationals held in 1997. His first Nationals medal was a stellar gold. He won it in the year 2000. By the year 2003, Vijender had become the all-India youth boxing champion. Another important feat in 2003 was the silver he won in the Afro-Asian Games. The win was all the more special as Vijender was just a junior boxer then.

In the following year, Vijender made his Olympic debut at the 2004 Athens Summer Olympics. He competed in the welterweight division in the tournament.  He won his first Commonwealth medal, a bronze, in the year 2006.

At the Asian Games 2006, Vijender participated in the middleweight category. Here again, he lost the semifinal bout and had to settle for a bronze medal. A back injury was almost going to stop him from competing in the Beijing Olympics. However, he recuperated and qualified for the games.

Vijender gave his all for the preparations. He fought with German boxers to upgrade his skills. The previous Olympic experience also helped him improve his game. The Olympic camp held in Patiala also played a crucial role. On August 22, 2008, he made history by being the first boxer from India to win an Olympic medal. After one successful bout after another, Vijender was knocked out in the semifinals. His bronze his no less than the gold, as it was the first for the country.  Vijender received a hero’s welcome when he came back. He was bestowed with numerous awards for his feat.

Another bronze came at the 2009 World Amateur Boxing Championships. Subsequently, Vijender became the top-ranked boxer in the AIBA middleweight category.

Vijender’s medal-winning spree continued in the following years. He added a Champions of Champion silver medal to his medal tally. The tournament was held in China. In 2010, he won the gold at the Commonwealth Boxing Championship organized in New Delhi.

The 2014 Commonwealth Games were his last major tournament as an amateur boxer. He won the silver medal in the tournament.

In the year 2015, Vijender turned into a professional boxer. He signed a multi-year contract with Queensberry Promotions through IOS Sports and Entertainment. He had his first professional boxing bout in October 2015. Since then, Vijender has had nine consecutive wins. For any professional boxer, staying unbeaten is a huge achievement. Vijender’s next fight will be against Ernest Amuzu of Ghana. Moreover, he is currently ranked fourth as per the World Boxing Organisation Rankings.

Punjab police seized heroin and other drugs from Anoop Singh Kahlon’s house in 2012. A car that belonged to Vijender Singh’s wife, Archana, was found there. Due to this Vijender embroiled in a drug controversy. There were allegations that he consumed drugs more than 12 times. Vijender denied all the allegations and declined to be tested. Eventually, he had to get tested on the order of the Sports Ministry of India. National Anti-Doping Agency gave him an “all-clean chit” in 2013. Vijender held his dignity and handled the situation well. After the got the all clear, he was finally happy that the torture was over.

In an interview with The India Today, Vijender Singh expressed his gratitude. Here is what he said, “The nightmare is finally over for me and I am back to my normal life. I have started training and looking forward to the World Championships in October. I am thankful to the Haryana Government, the Sports Ministry, the Indian Olympic Association and the Indian Boxing Federation for standing by me and because that gave me a lot of confidence. Now I am back to training in the camp and nothing can be better than this.”

Handling adversities and coming out of them stronger are the most important traits of a champion.

Too many of us are not living our dreams because we are living our fears. #FridayMotivation #FridayFeeling #VijuWithU pic.twitter.com/lmd9aAYaUC

Vijender has brought boxing into the limelight and inspired many to take up the sport. Through his modeling gigs, television appearances, and social media statements, he has always been in touch with his fans. He has time and again given his opinion on disparities in sports, the issues grappling budding sportsmen and women.

In an interview with The Telegraph, he said,

“Thanks to the media, people have started taking boxing seriously over the past two years. Everyone knows my name now because my achievements have been highlighted. Lekin boxing ka toh kuch promotion hi nahin hota India mein. We don’t have boxing academies, we don’t even have proper boxing rings. I have lost count of the times I have approached the government and the sporting authorities for support, but nothing has happened.”

We can definitely say that Vijender Singh Beniwal has glamorized the field of boxing. However, he has always highlighted the struggles and sacrifices. He continues to share snippets of his workouts and training sessions. After a successful journey as an amateur boxing champion, he is now becoming an equally successful professional boxer. We hope that he continues to inspire millions and wins every bout successfully!

Mamta Thatte
A passionate foodie, a versatile writer, and now a sports enthusiast, Mamta is always open to exploring new avenues. She has a vast experience in Web Content Writing, Editing, and Social Media Management. A self-confessed coffee and dark chocolate addict, she believes in following her heart and giving her 100% into everything she does.
Previous articleIs Kerala Blasters the most popular ISL team? We find out
Next articleIndian Hockey: Hockey Legends to play an exhibition match on October 10

Asian Boxing Championships: Shiva Thapa stormed into the final | Four others signed off with bronze

Reisangmei Vashum owns a club, sets off on a noble mission to groom kids – KreedOn Candids

Vijender Singh to take on British Boxer in search of Third...

Shiva Thapa: The story of youngest Indian Boxer to qualify for...

Bhavina Patel has a sole mission to win a gold medal...