When Varun Singh Bhati was just six months old, an incorrect medicine during polio, rendered him disabled. But his spirits could never be dampened. The Uttar Pradesh lad pursued a high jump in the T-42 category. 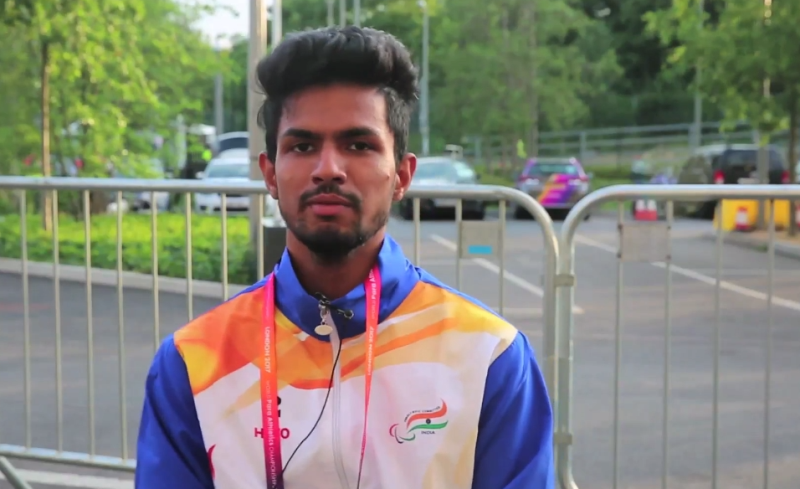 Most of us tend to find excuses for our shortcomings. However, there are some champions who turn their shortcomings into their strength and achieve their dreams. Life is never easy. It will very difficult to understand someone else’s journey without getting into their shoes. Sometimes, reading about other people’s struggles and how they eventually overcame it can give hope to others.

Varun Singh Bhati’s journey from polio to Paralympics is exactly like that. He has and continues to inspire numerous people. Today we take a glimpse into his extraordinary life.

Family members of bronze medal-winning Paralympian Varun Bhati say "we are very happy, he has made the nation proud" pic.twitter.com/bdZGCcbOUu

Born and brought up in Greater Noida, Varun always knew that he will achieve great heights in sports. His father, Hem Singh Bhati, is the sarpanch of their village. His mother is a homemaker. The entire family has supported Varun in all his endeavors.

“Instead of working at a 9 to 7 job, I decided to pursue my passion. I will always thank my parents. They never forced me to only pursue studies and were open to my passion for sports” he told Republic World.

Varun Singh Bhati was just six months old when he suffered Poliomyelitis. Due to incorrect medicine by the doctor, he ended up with a permanent disability in his leg. Varun did not let this deter him in any way.

He started playing basketball in school. Since he loved jumping, the transition to high jump was easy for him. Numerous times he has competed with able-bodied sportsmen. It was his focus and determination that has enabled him to achieve so much at such a young age.

He said, “Make sure you have a goal. Life without any goal is worthless. You should always be focused on your goal. Have faith in God and don’t stop until you achieve it! Life is too big to get disheartened at small failures,” in an interview.

His talent was chiefly visible in the school itself. His school teachers supported him in his initial years. Later, he started training under Satyanarayan and his technique improved a lot.

READ | Meet the Top 15 Indian Para Athletes who made the Nation proud!

In which category Varun Singh Bhati Play? The T-42 Category

Varun Bhati participates in the T-42 category. The International Paralympic Committee defines the T-42 class in Paralympics as,

“Single above knee amputees and athletes with other impairments that are comparable to a single above knee amputation. This includes athletes with loss of muscle power in the lower limbs consistent with Class F57 or F58 class. It also includes lower limb affected by limb deficiency, leg length difference, impaired muscle power or impaired range of movement.”

Varun participated in the qualifiers for the 2012 Summer Paralympic Games and made a mark with a jump of 1.60m. However, he couldn’t qualify due to the limited slots that were available. Finally, he got an opportunity to represent the country in 2014. He participated in the Incheon Asian Para Games but missed out on a podium finish. He stood 5th in the tournament. But the games gave him a lot of exposure.

“I sat in the stands of the stadium and cried a lot. I had all plans to quit at that moment. But I didn’t plan on giving up. As a result, in the coming games, I could achieve better results,” he told Republic World in an interview.

His first medal came in 2014. Nonetheless, it was a shiny gold medal! He won top honors at the China Open Athletics Championship. At the 2015 Para World Championship, he stood 5th once again. His jump of 1.82m at the IPC Athletics Asia-Oceania Championship catapulted him towards an Asian record. He won the gold in the 2016 edition of the tournament.

Varun Singh Bhati is a superb athlete. Was great to learn about his experiences at the #Paralympics. pic.twitter.com/3Hv0r8nKVV

The Rio Paralympics Games will always be special for Varun as he gave his personal best then. With a jump of 1.86 meters, he won the bronze.  Another bronze came in the 2017 World Para Athletics Championships. Varun was apprehensive about his preparation for the tournament. However, he performed very well and his jump of 1.77 meters landed him on the podium. Moreover, fellow high jumper and friend, Sharad Kumar won the silver medal.

In an interview with The Times of India, Varun’s uncle Teekam Bhati said,

“He was nervous because he hurt his leg during the practice before the competition. Also, much of his time was spent in felicitations and he felt bad about missing practice as a result. He felt his preparation wasn’t at the same level as it had been for Rio. But all of us were confident that he would do well, and he has.”

Varun believes that training is the most important part of an athlete’s life. The hard work and willpower shown during the training sessions reflect through his or her performance.  He couldn’t be more right! The consistency Varun has shown throughout his career is commendable. Of course, he is very young and has a long way to go. The future is extremely bright for this rising star.

Even after his Rio feat, Varun continued training hard and has continuously set new goals for himself. This spirit will surely take him places. Disabilities can never stop those with strong minds.

The growing encouragement and support for our parathletes are so heartening. These sportsmen and women have time and again shown that their nerves are made of steel! Every athlete’s story is so inspiring! Words aren’t enough to praise them.

We are sure Varun and other athletes will surely make us proud at the Jakarta Para Asian Games!

Mamta Thatte
A passionate foodie, a versatile writer, and now a sports enthusiast, Mamta is always open to exploring new avenues. She has a vast experience in Web Content Writing, Editing, and Social Media Management. A self-confessed coffee and dark chocolate addict, she believes in following her heart and giving her 100% into everything she does.
Previous article
Indian Women beat Uruguay 2-1 in the second 2018 Youth Olympic Games hockey match
Next article
Manu Bhaker Shoots Her Way to Win India’s Second 2018 Youth Olympic Games Gold

Track and Field Events – Know what are the different types of events in athletics & how one athletic event differs from another –...

Top 9 Indian Paralympians to watch out at the Tokyo Paralympics...