Types of Bowling in Cricket: A to Z guide for fast and spin bowling

We have all heard commentators using the term “variations in the bowling” while watching Cricket. And we all know what they mean by variations. But have you ever wondered how many types of bowling in cricket are there? Let us find it out. Here is the entire list of types of bowling in Cricket.

For starters, we are all aware that there are two basic types of bowlers – Pacers and spinners. They can be further divided into fast bowlers and swing bowlers in pacers and wrist spinners and finger spinners in the spin bowling department.

Now let us take a look at the types of bowling in Cricket or the Cricket delivery types.

Types Of Bowling In Cricket

There was a time when good length deliveries with vicious swings and bouncers were the heart and soul of a fast bowler. The West Indians were known and even feared for their fast bowling attack. But with the introduction of T20 Cricket, small boundaries, and thicker bats, pace bowlers have had to add several new weapons to their arsenals. Yorkers and slower balls have become a crucial part of fast bowlers nowadays. Let’s go through each type of bowling in cricket one by one: 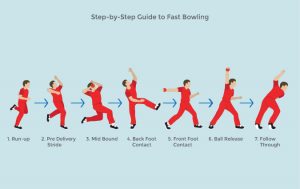 You have to start with the bouncer. A word synonymous with pace bowling, a bouncer is one of the most lethal deliveries in cricket. By pitching the ball at a short length, a well-directed bouncer can more than shake the batsman.

Due to its dangerous nature, the rules for bouncers have been changed several times. Currently, a bowler is allowed to bowl two bouncers per over in ODIs and one in T20s.

English bowlers infamously used this bowling technique during the 1932/33 Ashes to get Sir Don Bradman out. The unfortunate death of Phil Hughes caused even more concerns about bouncers in modern-day Cricket, but it continues to play a crucial role in both tests and limited-overs cricket.

Names like Malcolm Marshal, Andy Roberts, Shoaib Akhtar, and Mitchell Johnson, and Brett Lee come to mind when you think of the best bowlers of bouncer deliveries.

A perfect setup for the right-handed batsman in test cricket. A perfectly pitched ball on the good length at the fourth stump going away from the right-hander with slip fielders waiting for the slightest of the edge is a dream scenario for any pace bowler.

The bowler can hold the ball in three different ways: relaxed, firm, and strong, and these ways will decide how the ball rolls down the lane.

Left-arm bowler running into a bowl to a right-handed batsman around the wicket, the angle is already there – And Boom – The bowler swings one in! If the batsman decides to look back, he/she is likely to see the timber all over the place.

Just like outswingers, these deliveries are also pitched on a good length but are a little difficult to master. India’s Bhuvneshwar Kumar is currently one of the finest inswing bowlers with the angle he creates with his action.

Both inswingers and outswingers that we have seen so far work when the ball is new. But as the ball starts getting older and loses its shine and shape, it becomes difficult to swing the ball in either direction.

But usually, after 35-40 overs, the ball starts to swing towards the shine, unlike the new ball which swings towards the rough side. This swing is known as reverse swing, where inswingers with new balls become outswingers and vice versa.

The reverse swing moves the ball more than a normal swing and also takes place late in the delivery, making it challenging for the batsman to identify it. But at the same time, it is one of the hardest skills to master. Wasim Akram and Waqar Younis of Pakistan are considered the finest reverse swing bowlers. India’s Zaheer Khan was also a master of the reverse swing.

Leg and Off Cutter

Leg-cutters and off-cutters can be tough to tackle if bowled perfectly. But these cricket delivery types being much slower than usual fast bowler’s deliveries, there is little to no margin for error.

Leg cutters are simply slower deliveries bowled with fingers rolled over to the leg side to generate the spin. Right-arm bowlers use their index fingers to spin the ball towards the leg side. Vice versa applies to off-cutters. These deliveries are similar to the spinner’s leg break and off-break but are bowled at a higher speed.

This needs no introduction, does it? We have seen so much of Bumrah in past mathes that ever we can get the Yorker spot on.

Yorker deliveries are the most difficult to master as there is absolutely no margin for error. A little mistake and the batsman will be ready to send your full-toss delivery out of the park. But when bowled excellently, the Yorker, bowled at around the batsman’s feet cramps the batsman for space, and usually end up destroying the stumps.

If you ask us, there are very few better bowlers of Yorker deliveries than New Zealand’s Shane Bond. His ability to bowl banana Yorkers, dipping in the batsman was simply unplayable.

A yorker is known as the king of all bowls. In this style of bowling, the ball lands directly at the batter’s feet and which makes it extremely difficult to hit. As per the Oxford dictionaries, the term originated when players from York bowled them so often.

The addition to the fast bowler’s arsenal is due to the introduction of T20 cricket – the slower ball. Just a stock delivery bowled at a much slower speed than a normal fast bowler’s pace. These deliveries deceive the batsman, and they mostly end up playing the ball too early and missing or hitting it up high in the air for a simple catch.

Slower balls are usually bowled with the back of the hand or in the form of a knuckleball. Picked up from Baseball, the knuckleball is where the bowler places his/her knuckles on the ball instead of fingers. But from the batsman’s point of view, it is a standard delivery that eventually ends up being the slower one.

Leg Break and Off Break: Different Types of Bowling In Cricket

Remember Shane Warne’s Ball of the Century? The Australian bowled from over the wicket and pitched the ball a little outside leg stump only for the ball to spin and knock over Mike Gatting’s off stump. This might have been a 1993 incident but it still perfectly explains what a leg break is.

And just opposite to the leg break, off break is the ball bowled outside off stump and spinning to the leg side, going into the right-handed batsman.

In the leg spinner’s normal delivery, the cricket ball spin from right to left (from the bowler’s perspective) when the ball bounces on the pitch. For a right-handed batsman, when the ball is away from the leg side, this is where it gets the name leg break.

The most heard term when a spinner is bowling, googly is also called the wrong’un. And as the name suggests, Googly is the spin in the ‘wrong’ direction for the leg spinner. Unlike standard leg-break delivery, the Googly spins from off the leg, going into the right-handed batsman. Unlike off-break delivery, the bowler uses his/her wrist to generate a sharp turn for the googly.

Doosra (Off Spin Bowling): Different Types of Bowling In Cricket

Doosra for off-spinner is what Googly is for the leg spinner – Off spinner’s wrong’un. In these types of deliveries, the ball spins from the leg side to off, opposite to that of an off spinner’s stock delivery – off-break. Although this delivery is relatively new to the Cricket world considering the rich history of spin bowling, the likes of Muttiah Muralitharan and Harbhajan Singh have made it very famous.

Top spinner (Leg and Off Spin Bowling): Different Types of Bowling In Cricket

Bowled by both leg and off-spinner, a top spinner is what we call a loopy delivery. This delivery is bowled by releasing the ball over the top of the fingers and is dropped a little shorter of the pitch. With the topspin generated, the ball falls a little faster and bounces higher than the batsman might be expecting. Topspin is in between the stock delivery and wrong’un.

Remember when Sri Lanka’s Ajantha Mendis wreaked havoc against India in 2008. His off-spin bowling took 6-13 against the mighty Indian batting line-up as no one could read his carom balls.

Carrom ball is more about holding the ball in a particular way and releasing it than anything else. The ball is held with the thumb, index, and middle finger and unlike regular deliveries, it is released by flicking the fingers as a carom player does with the striker. The spin of the ball depends on the way the ball is held. If the middle finger is pointing towards the offside, ball spins from off to leg and vice versa.

It is called a carrom ball because when the ball is flickered from the bowler is similar to the player of the carrom board flickers to play the coin.

The exact opposite of the top spin, a slider is bowled with the bowler’s fingers rolled down the back of the ball, mixing both side spin and backspin. And unlike the topspin delivery, a slider is pitched a little fuller and bounces less than expected. 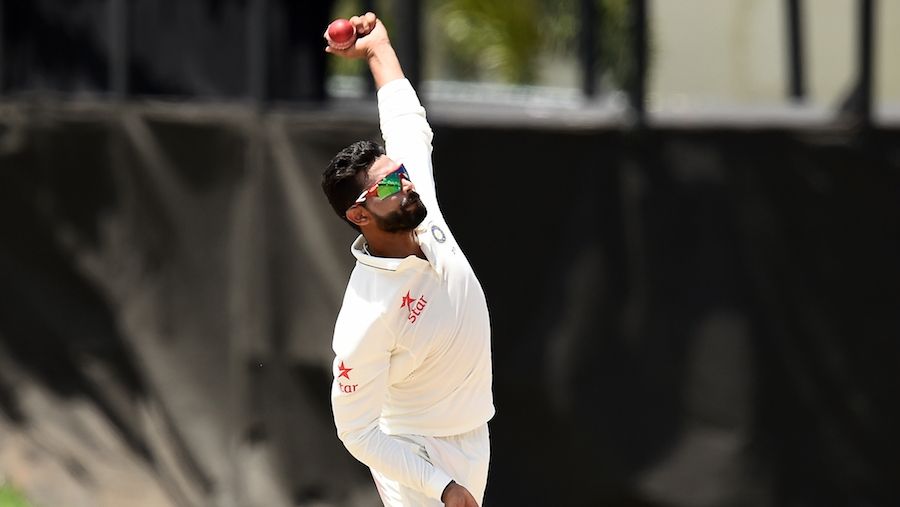 The arm ball is the off-spinner’s variation of the slider where the bowler decides to bowl straight instead of spinning the ball in any direction. Currently, Ravindra Jadeja is one of the big names using an arm ball regularly.

Chinmay Pagar
I might be a Mechanical Engineer on the paper, but I was a Sports enthusiast since childhood, screaming at the TV watching cricket at the age of 4. Not much excites me other than sports unless it's free pizza. I can watch literally anything remotely related to sports; Cricket, Football, Tennis, F1, Hockey, Athletics, Chess, you name it! And I love to write too, so at the time I'm not watching sports, I'm writing about it. Or eating pizzas, of course.
Previous article
India’s viral, somersaulting kids gets helping hand from SAI
Next article
Dream11 PAT vs UP Pro Kabaddi League 2019 | PKL Prediction