Being a Wicket Keeper is one of the most important positions in the game of Cricket. A wicket keeper not only protect the byes or take the catches or get the batsman out using stumping. But they can also be useful in guiding the ballers about where to ball. Being so close to a batsman does give them an edge in seeing things. Some of the most influential players have been wicket keepers. Today we will be looking at the list of top ten best wicket keeper in the world across all formats of the game.

Dinesh Ramdin is the first name on the list of best wicket keeper in the world. Ramdin played for West Indies from 2005-2019 in international Cricket, playing 284 international matches.

Ramdin was a right-handed wicket-keeping batsman and has the record for the second-most dismissals in international cricket for West Indies.

He took part in no less than 468 dismissals on the international level.

The South African Wicket Keeper Batsman, Quinton De Kock impressed everyone from the very beginning. He has been heralded as an upcoming great ever since his three consecutive centuries against India.

But the value he brings to his team by donning the gloves is without a doubt invaluable.

Also Read: Top 10 Players with Most Centuries in IPL History

At number eight on this list is the retired West Indies Cricketer Jeff Dujon. Dujon played during the ’80s, his career spanning about 10 years.

Dujon also has the most dismissals for West Indies Cricketer in the history of their Cricket. He had taken 474 dismissals in 250 international matches across ODI and Test Match Cricket.

Australia is a country with a rather vast history of Wicket Keeper Batsmen who have been influential to the team’s performance in various ways.

Brad Haddin is another such name. Making his debut in 2001 and retiring in 2015 from international cricket, Haddin comes at number seven taking part in 474 dismissals in 226 matches.

Another Australian on the list, coming up on number sixth is Rod Marsh with 479 dismissals in his entire international career.

What’s remarkable is that Rod Marsh achieved this feat in only 188 matches which is not only 38 less than Haddin but is also the only time when someone in this list has played less than 200 matches and been part of these many dismissals.

Coming up at number five is another Australian wicket keeper, Ian Healy. A wicket-keeper who the great spinner Shane Warne referred to as the greatest Wicket Keeper he had ever seen.

Making his debut in 1988 and playing until 1999, Healy was the first wicket keeper to have more than 600 dismissals to his name.

In fact, he did it in less than 300 international matches, having 628 dismissals in 287. For a long time, no one could break that record, and even now among fellow Australians, Adam Gilchrist has more dismissals than Healy.

Kumar Sangakkara is one of the greatest cricketers to ever exist. Not only is he on the list of most international runs and centuries, but he has also proved his worth in wicket keeping as well.

Sangakkara, a known legend of the game, has played 594 international matches in his international career, which is the most by any wicket-keeper.

He stands number on this list with 678 dismissals to his name.

The only Indian name on this list is MS Dhoni, perhaps one of the biggest and respected names in India.

Mahendra Singh Dhoni is remembered differently to different people. Some will remember him as the only captain to win all ICC Trophies and some as an explosive finisher but one thing everyone can agree on is that he is without a doubt the greatest wicket-keeper the country has ever produced and the numbers seem to agree with that.

With 829 dismissals in 538 matches, Dhoni stands at number three for the best wicket-keeper in the world list. 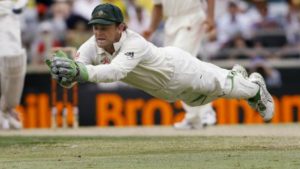 Australia has produced a lot of great cricketers in its history but there are not many who were as influential as Adam Gilchrist or as he was more popularly known among his teammates ‘Gilly’.

Gilchrist was an unbelievable explosive batsman and one of the safest hands in the world.

Playing 396 matches in his international career and having 905 dismissals attributed to his name, Gilchrist only comes behind Mark Boucher on this list.

Topping this list and getting crowned the Greatest Wicket Keeper in the world is the South African legend, Mark Boucher.

Boucher had played 467 matches in his career and had 998 dismissals to his name, only 2 short of a thousand dismissals.

Boucher was undoubtedly one of the safest hands behind the stumps and his contribution to his team was irreplaceable.

With the era of players like Rishabh Pant, Tim Paine, and Quinton De Kock already on the rise, players like the ones on the list will always be a source of inspiration for the youth of the world.

What makes the game of Test cricket superior? 3 Reasons – Must Know

13 Rohit Sharma records that he holds across all formats

Meet the Top 25 most famous sports personalities in India