Tejinder comes from a family of farmers. Born and brought up in a humble family in Moga, Punjab shot put was never really the plan for the youngster. As a child, Toor wanted to be a cricketer like most Indian boys.

His father encouraged him to try some individual sports instead. Since his uncle was already playing shot put, Toor decided to follow in his footsteps. The decision was fairly easy, but taking playing a sport professionally became a herculean task for the family with meager means.

Toor first came into the limelight when he won a silver medal at the Asian Championships in 2017.

The Gold Coast Commonwealth Games were the next big opportunity for him. He qualified for the games with an impressive score of 20.24m. And for the finals of the shot put event at the CWG. He was ranked sixth in the qualifiers. In his first two attempts, he managed throws of 18.49m and 18.43m. The last attempt was better with a throw of 19.10m.

The tournament ended on a very disappointing note as Tejinder Singh stood at the eighth position in the finals. Coming on a high after the silver at the Asian Indoor Championships, CWG was a big downer.

It was very difficult for his humble family to bear the additional expenses. His training, diet, and equipment weren’t cheap.

“The thing about shot put is, as you go up the levels, your expenses also gradually rise,” said Tejinder Singh. “You need better food supplements, you need to go to a better gym, need better shoes,” he told Sportskeeda.

The main requirements for any athlete are good shoes. His shoes used to hardly last for a couple of months. Including the supplements, his monthly expenses go up to 50,000.

Tajinder believes that an adequate amount of financial support by the government will help budding athletes to concentrate on their sport instead of worrying about other things.

Tajinder has no problem fighting it out with opponents in the field, but there is one fight that he cannot win. His father was diagnosed with skin cancer in 2015. Fortunately, it was in the initial stages and was cured by surgery.

The tragedy shook the entire family again the next year as now his father had fourth-stage bone cancer. This time the stakes were not in his favor.

The Indian Navy played a crucial role by offering him a job. They are also helping with all the medical expenses related to the treatment.

“At this stage, I know that my father is not going to live for too long. All I want to do right now is to win as many medals as I can, while he is still alive. I want to give him all the medals,” he said in an interview. 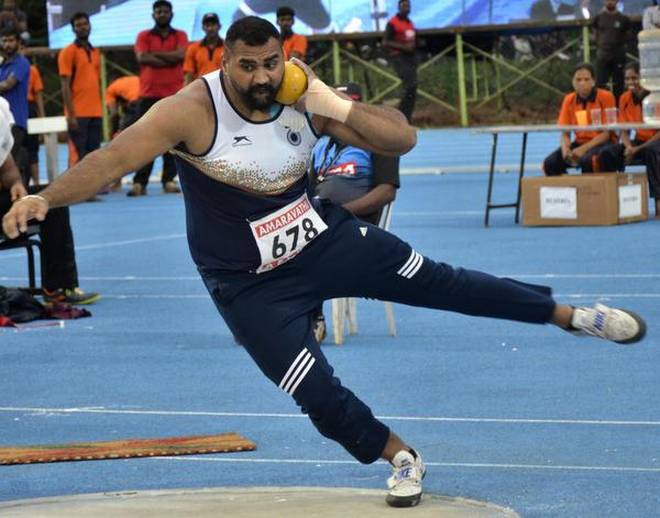 Several athletes are training abroad for the Asian Games. However, Toor prefers the high altitude in Dharamshala. He is training very hard for the Jakarta Palembang Asian Games. Of course, he knows it won’t be easy. After the disappointment at the Gold Coast Commonwealth Games, the performance here will be crucial to changes things.

“This will be my first appearance at the Asian Games. But I am totally confident. There is no pressure or nervousness. I am confident of doing well. I am among the best in Asia and it will not be easy to beat me,” Toor told Business Standard.

Yes, there will be challenges, but we are sure the Asian number one will crush them and win the top laurels. His contest with the Chinese and Iranian shot putters will be very crucial. Toor is inspired, dedicated, and talented. Although life hasn’t been easy for the champion in the making, he has time and again proven how tough he is. He will definitely stand on the podium at the Asiads. And when he does, we cannot wait to cheer him on!

READ | PT Usha: The Story of Sprint Queen of India

Finally I have achieved my target for ticket to #Tokyo2020 Inspite of numerous setbacks like injuries and Covid situations, me and my coach Sh. Mohinder Singh Dhillon stood strong.I am happy that now I have qualified for Tokyo 2020 and will work hard to give my best during games. pic.twitter.com/nk9Ktz3xcR

Hard work always pays off, whatever you do. #hardworkpaysoff #passion #Tokyo2020 pic.twitter.com/UtsIZX2z82

Mamta Thatte
A passionate foodie, a versatile writer, and now a sports enthusiast, Mamta is always open to exploring new avenues. She has a vast experience in Web Content Writing, Editing, and Social Media Management. A self-confessed coffee and dark chocolate addict, she believes in following her heart and giving her 100% into everything she does.
Previous article
Asian Games 2018 India shining on Day 2 with another gold
Next article
Asian Games 2018 highlights India bags another gold on Day 3

Track and Field Events – Know what are the different types of events in athletics & how one athletic event differs from another –...

Ramkumar Ramanathan Biography: Get To Know The Life Story of This...

Sandesh Jhingan Biography: Story of Surpassing Every Obstacle To Follow His...