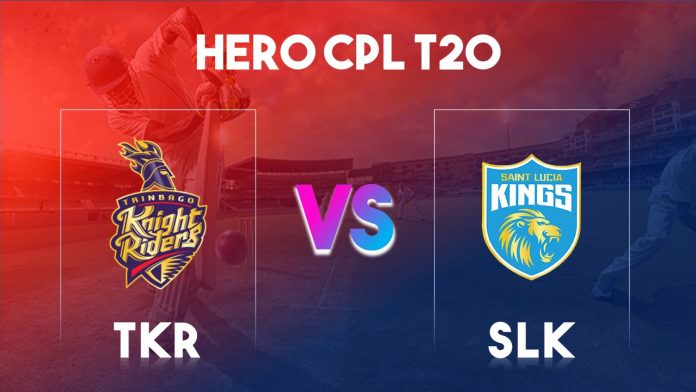 TKR vs SLK Dream11 Prediction: After the end of the group stage, it is now the start of the knockout phase. The first semi-final is between the table-toppers Trinbago Knight Riders and St. Lucia Kings. The team winning this match will directly go in the finals, and the team losing this match will not get another chance and will be knocked out.

Trinbago Knight Riders were the table-toppers. They played brilliant cricket throughout the league stage and deserve the top spot. Everyone in their team has played well and contributed at some stage or the other. They would want to win this match in the same way they have so far.

St. Lucia Kings, with some struggles, has managed to end up in the fourth position in the points table. They have had some consistent performances from some of their players. They will want to get even better and give out bigger innings from other players. This match will be very important for them.

Andre Fletcher- Fletcher is a player who can play smart cricket, but has not given match-winning performances so far. He gets good starts but is not able to convert them into big scores. His last innings was a much better one, and he would want to add on to that in the next match.

Lendl Simmons- Simmons has been a decent performer, but as an opener, his strike is very low. He has the muscle power to score quick runs and needs to bring that into action. He will have to take advantage of the powerplay to get a quick start.

Colin Munro- Munro has scored decent runs but is very slow while scoring. While anchoring the innings, his strike rate has gone drastically. At the moment, it is below 100. He needs to get some quick runs in the next match to balance that out. He has scored good runs in many matches, but all of them were very slow.

Tim David- Tim David played some match-winning knocks at the start of the season, but his form has slow fizzled out. His score of 47 was an important one, but unfortunately, he could not win the match for his team.

Roston Chase- Chase is in incredible form. He is not just St. Lucia’s highest-scorer, but also CPL 2021’s highest run-scorer so far. This performance coming from a lower middle-order batsman makes it even more special. He scored a half-century in the last match as well and would want to score runs in the knockout game too.

Kieron Pollard- Pollard can never be out of a game. If not with the bat, he will get wickets. If not with the ball, he will put all his energy into the field. This season, he is Knight Riders’ highest run-scorer and the most important reason for them being able to make it to the semi-finals.

Sunil Narine- Narine has been around for a few years now, and after his revamped action, he has not been very effective but still gets the job done for his team. This season he has picked up 11 wickets and has been very economical with conceding just over 4.5 runs per over.

Ravi Rampaul- There is no doubt that he has been Knight Riders’ best player this season. He has picked up 18 wickets in 10 matches so far. He is at the second position on the wicket-takers chart and will want to continue taking wickets in the last stages of the game.

Alzari Joseph- Joseph always lets the ball do the talking for him, but this time he has been a little quiet. Despite his good performance, he was not selected for the T20 World Cup squad. He will have to now crawl his way through the international side in the future.

Wahab Riaz- Riaz had a good season in the PSL and was among the top wicket-taker list, but CPL has been quiet for him. The last match was a better game for him, and he will have to improve on that in the next match.

Ali Khan- Ali Khan has only played 3 games in this season but has picked up 8 wickets already. He will want to take more wickets and make his team win matches. The only thing he needs to work on is reducing his economy.

KreedOn Network
We are a team of sports writers who research about sports in India day in day out. Please reach out to us in case of any specific requirement of digital services on [email protected] .
Previous articleSL vs SA 3rd T20 Dream11 Prediction | Sri Lanka vs South Africa
Next articleGUY vs SKN Dream11 Prediction | CPL 2021 Semi-Finals 2 Predictions