Recently, when I interviewed a Commonwealth Games medalist, he said to me,  “After Sindhu didi’s victory, everything changed. We got more support from our families, coaching academies and all of India.” This statement is directly related to the role of the news in the development of Indian Sports

This same message was echoed by seven out of eight international badminton players that I interviewed.

I’d started wondering about the drastic change in the sports sector back when it started happening in 2016. When PV Sindhu won a silver medal in the Rio Olympics, everything changed around me. The attitudes of people, the participation in sports, and the structure and facilities available to me, all changed. And as I’ve explained in my previous article, this caused the most drastic change in the sporting industry in India. As an athlete, I could feel and see it everywhere. 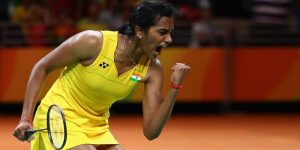 But here’s what I found weird about it: although India had had similar victories before, the degree of transformation was unprecedented. We’ll take a prime example that highlights this difference. Saina Nehwal’s 2012 London Olympics Bronze Medal. After this Olympics victory, there was comparatively much less talk. There was little change in the structure of sports in the country. But Sindhu’s silver medal came in and sports in India seemed to have pulled a Priya Prakash Warrier. I kept wondering what was it that caused such a difference in the impact of two very comparable achievements. And although I am far from uncovering the truth, I believe that I have at least one aspect figured out.

Therefore, I will talk about exactly that, and I am going to try and explain it using one of my favorite behavioral economic concepts: the principle of availability heuristics.

“Due to the availability heuristics, people tend to assess the relative importance and probability of issues by the ease with which they are retrieved from memory. This explains everything” 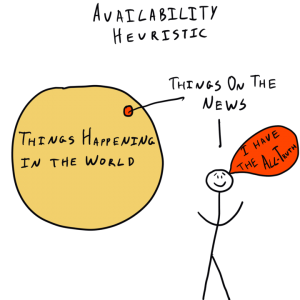 To begin, let me briefly explain this principle: The availability heuristic states that our brains are more likely to believe in an outcome if an example of that comes up readily to our minds.

For example, we are almost as likely to die in a car crash as we are to die by tripping. However, most of us believe much more in the likelihood of dying in a car accident. Thus us because we are able to think of a greater number of immediate examples of car crashes, since they are commonly portrayed in movies and on television.

In comparison, stories of falling and dying are not covered as much by the media, and thus our mind is tricked into believing in a higher probability of dying in a car crash, even though it is grossly incorrect.

And the fact of the matter, as clearly stated by renowned economist Kahneman, is that people tend to assess the relative importance and probability of issues by the ease with which they are retrieved from memory—and this is largely determined by the extent of coverage in the media. And that is exactly where our answer about the ‘PV Sindhu effect’ lies- the media and broadcasting. 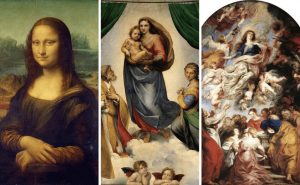 To understand this, Let’s take the example of the Renaissance movement, the peak period of rise of liberal arts and sciences- of the professors, historians and physicists of the world. Media or the equivalent of that at that time, played such an important role in glorifying the Picassos and Newtons of the world that art and science reached a new height. Because of the high regard for art, the demand for it increased, causing art to become a major vehicle for employment generation and economic development. Something similar happened after the 2016 Olympics. And that is exactly what differentiated this victory from the 2012 London Olympics.

“All it takes is to showcase a few positive role models in the media. this, in turn, sets into motion other changes, which revolutionize the sports sector, while consequently bringing about economic development.”

According to reports, only about 90 million Indians tuned in to watch the 2012 Olympics. In comparison, almost 228 million Indians watched the 2016 Olympics; 60 million of whom watched Sindhu’s finals match itself. This gives a clear picture of one of the differences: the exposure of Indians to the matches. Not only that, but the subsequent interviews, newspaper reports and memes made a huge difference. As Kahneman stated, the more the media coverage of an event, the more embedded it gets in one’s system. The more the media covers it, the more conversations it starts everywhere. If the media believes it’s awesome, so do the one billion people of India.

All it takes is to showcase a few positive role models in the media. Every time people think sports in India, they now think of PV Sindhu (and of course the cricketers, which has always been the case). They think chances of success are high. Thus they start investing more resources- their time, money and effort- into sports training, equipment, into sports as a whole. And this, in turn, sets into motion other changes, which revolutionize the sports sector, while consequently bringing about economic development.

What more can be done

If there is one area where we could bring about an improvement, it would be to broadcast the success stories of sports role models even more. Simply because it inspires all – rich or disadvantaged. One must talk about the software engineer that quit his job to become a coach because that’s how financially rewarding the sports today is. It must talk about how a poor child ran away from his home and is now a graduate from the National Sports Institute and also one of the wealthiest coaches in India. One must talk about someone who never gave up on his dreams and is now one of the top athletes in India.

For example, Baton of Hope, an organisation to I started help underprivileged athletes pursue sports, tries to bring about sports development using this exact principle. I interviewed numerous successful players who came from disadvantaged backgrounds. That’s when I realized that all of them had that one athlete who inspired them to continue sports. In their case, they were inspired by that athlete all the more because the athlete had a similar financial background to theirs. Thus, we made an inspirational video series- Copper to Gold. This was on successful international and national athletes who came from economically and socially disadvantaged backgrounds. We also ran an Instagram campaign to reach other disadvantaged athletes at the grassroots level through this series.

We started by starring Arati Janoba Patil. She was the specially abled daughter of a construction labourer, and India Rank 2 in badminton. Part of the same series was Subhankar Dey, world rank 38 in badminton. He ran away from home and did not have enough to eat, but gave his life to sports. We also starred Abhishek Bedi, a software engineer who quit his job to work in the sports industry.

The logic behind this was availability heuristics. To put it in simple words, we launched this to tell them, “if they can do it, so can you.”

By bringing out these untold stories, we showed the success stories of persons who underprivileged athletes could relate to. Thus, when amateur and professional athletes from disadvantaged athletes would think about sports from an economic division perspective, they would know that there were numerous success stories, and would continue to invest their time and efforts into sports.

Sports News and media must do exactly that, if India is to grow in sports in the next few years. We must talk about icons at every level so that local dreams are also supported. Most of all, one must talk about not the sports sector of 2010. But we must also talk about the new evolved sports in India of 2020. Because in a way, the broadcasters and media are no less important than the Gopichands and Bhaichung Bhutias of sports. It is as much in their  hands to make or break the future of sports in India.

And with that, I end this article. I leave you with a famous quote by Malcolm X. “The media’s the most powerful entity on earth. They have the power to make the innocent guilty and to make the guilty innocent, and that’s power. Because they control the minds of the masses.”

Adya Bhargavahttps://www.batonofhope.org/
Adya is a 17-year-old student at The Shri Ram School and former India Rank 19 in badminton. She is passionate about the academic aspects of sports and writes about the interdisciplinary relationship between sports and economics. She also has her own organization, Baton of Hope, to help underprivileged athletes pursue sports at the grassroots levels.
Previous articlePV Sindhu in Badminton changed Indian Sports | Opinion
Next articleNational Sports Day 2020: Athletes receive awards in a ‘unique’ way