The Hundred Cricket: All you need to know about the new format of cricket

There’s no other sport that has been more inventive than cricket in the past decades. And there’s doubt that the fans have accepted each and every format with both hands. The T20 is already a major format with an exclusive World cup and the T10 format is gradually growing with international stars playing the league. Now, the England Cricket Board introduces “The Hundred Cricket”, another dimension to the gentlemen’s game. Let’s delve into The Hundred and get to know about it more…

What is the hundred cricket?

The Hundred cricket is a professional franchise 100-ball cricket tournament. The hundred involves 8 men’s and women’s teams which are located in all the major cities across Wales & England. The tournament will be governed by Wales & the England Cricket Board (ECB). The HUndred will take place for the first time in the 2021 summer. The tournament was delayed by a year due to the COVID-19 pandemic. The main focus to introduce the hundred is to increase the participation of the young generation in cricket.

Cricket is such a game with so many rules and things even get complicated at times. The Hundred is basically 100 balls in an innings. There are a lot of changes in rules compared to contemporary cricket.

READ | Best Indian All-Rounders In The History Of Cricket

The teams and tournament format

READ | Top 10 Best All-Rounder In The World Of Cricket

READ | Bamboo Bats: The future of Cricket | All you need to know

READ | Top 10 Cricket Umpire salary | Facts that will surprise you

The reason behind The Hundred

T20 Leagues have taken cricket to another level. The IPL continues to exist as the toughest and superlative cricket league in the world. There’s no doubt that the revenue incurred from the IPL over the years elevated BCCI’s power among other cricket boards. The idea of intertwining cricket and entertainment with celebrities, fan bases, and colorful pyro works was first introduced by India.

Later the renovated Big Bash League and the Caribbean Premier League followed the same path. England has its T20 Blast but its viewership and exposure on an international scale are very minimal. The ECB thought of having a similar league that entertains young audiences and families. The Hundred was supposed to commence last year but the pandemic stood by the way.

As former English cricketer and former director of ECB Andrew Strauss said, this is aimed at the young audience, mums, and kids to have fun during the summer holidays. In a country like England where the audience for traditional cricket matches is diminishing, this is seen as a way to make cricket great again. Adding all the ticket sales, broadcasting, and sponsorships, The Hundred makes a profit of 11 million pounds a season. But the criticism of squeezing the tournament into an already congested schedule is true. The workload of players would become a concern for the ECB. The conventional supporters of English cricket are against the Hundred because it reduces the number of counties playing in England. The franchises are amalgamations of more than one county and this disinterests die-hard county supporters. Moreover, the belief that cricket would lose its aesthetic element and become just a leisure event worries them.

READ | 20 best cricket umpires in the world of all time

International stars featuring in The Hundred 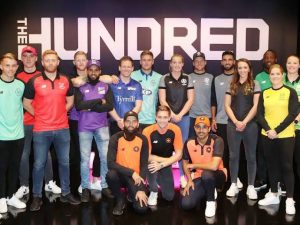 As it is taking place in between the international schedule, most of the international players are on duty. Yet, some of the T20 superstars around the world have aligned to light up the new cricketing spectacle. Mohammed Amir, Imran Tahir, Finn Allen, Mohammed Nabi, Lockie Ferguson, Carlos Brathwaite, Colin Munro, Chris Lynn, Faf du Plessis, Mujeeb-Ur Rahman, Sunil Narine, Colin Ingram, Quinton de Kock, Colin de Grandhomme, D’arcy Short, Jimmy Neesham and Glenn Phillips are the notable international stars featuring in the Men’s Hundred along with current English cricketers.

Every format started as an experiment but cricket and its people rarely reject any of them. The Hundred is the brand-new design of the sport and it just might be a matter of time when we witness an international Hundred event.

Aditya Mishra
Aditya Mishra is currently working as a head of content and manager at KreedOn. He is an ardent defense enthusiast and was a SSB aspirant (SERVICE- SELECTION-BOARD) during his college days. Moreover he has represented his state of C.G in All India Senior National Athletics Championship (Lucknow) and winner of several state athletics tournament (400m). Aditya did his PG Diploma from the prestigious Indian Institute of Mass Communication. With a vision to bring substantial change in India's sporting ecosystem, he along with his team are working for the development of Indian athletes.
Previous article
48 Amazing Olympic Facts That Will Blow Your Mind | KreedOn
Next article
Top 12 Best Indian Wrestlers of all time who made the nation proud

All About The 7 Richest T20 Cricket Leagues In The World-...