Taniya Bhatia Biography: A Fighter ‘Keeping’ Up Her Dreams 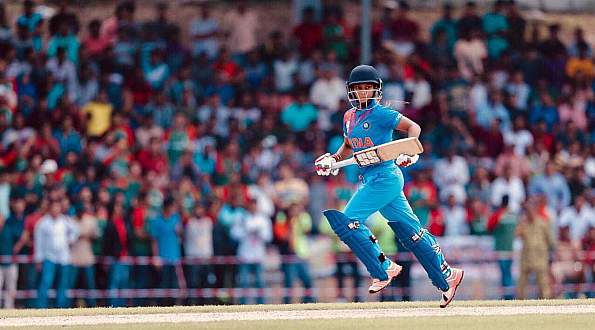 Taniya Bhatia is a rising Indian Wicket-keeper and a part of ICC Women’s World Cup T20 squad for India. Although the 21-year-old has made just three appearances for the national side, she is being already touted as the next “Dhoni”. Bhatia made her debut in India jersey against South Africa earlier in February this year. She hails from the north Indian state of Punjab and is a right-handed batswoman.

The Bhatia household could be fittingly called a “Keeping” family. Taniya Bhatia’s father, Sanjay Bhatia was a wicketkeeper as well, and played as a reserve for Punjab’s team, although he later went on to pursue a career in banking. Not only him, but Taniya’s uncle was a wicket-keeper too. Moreover, her brother, Sahaj Bhatia also helms the gloves behind the stumps for Punjab’s U-19 team.

Sanjay first discovered her daughter’s cricketing skills in a casual outing, when she was 7-year-old. He instantly saw the potential in Taniya and soon enrolled her to a nearby academy, much to the dismay of his family, including his wife.

Unsurprisingly, at the academy, Taniya too wanted to follow her family’s lineage and be a wicketkeeper. “Wicket-keeping came naturally to me,” she said in an interview. However, Sanjay was against her decision. He wanted her to be an all-rounder, considering the fact that she bowled beautiful inswingers. Nevertheless, Taniya prevailed over father. She was supported by her coach. Fortunately, going against her father eventually proved to be the right decision in the end, as she never grew by height to be a competitive bowler or an all-rounder.

Taniya soon started taking the sport seriously. She even changed her coaching for a better development. Her new coach was Sukhwinder Bawa, a batch-mate of Sanjay before she again changed her coaching under Yograj Singh. Singh is a former Indian cricketer and father of Yuvraj Singh. In fact, the younger Singh even applauded a young Bhatia, after witnessing her play at the academy.

Being the only girl among the boys helped Taniya improve her game, especially her keeping reflexes. In fact, no one treated her especially, not even Yograj Singh. As a result, when she would go on to play among girls, she would be at a great ease considering her robust coaching.

Success and the Fight Back

Post training for over 4 years at Singh’s academy, Taniya tried her luck for the Punjab trials at the age of 11 and was successful instantly. Till date, she has the record of being the youngest player in Punjab’s U-19 team. Once she had made the cut, there was no looking back. Within a year, her incredible performances had earned her a place in the state’s senior side.

Then, she progressed into India A squad, all at the humble age of 16. Playing in the side further helped her game, as Taniya would play against the senior international teams touring India.

However, the world seemed to move too fast for the youngster to handle – she entered into a 2-year slump. Thus, she lost her place in the India A side, a thing that took a toll on Taniya. So much so, that she almost lost interest in cricket. Her place in the state was under threat too. A depressed Bhatia would frequently miss routine practice sessions.

It was her mother, Sapna,  who became her emotional anchor and gave her the support Taniya needed. Sapna, in association with her elder daughter, would find ways to motivate the 18-year-old Taniya and pushed her to continue practising regularly.

The support by her kin in spite of her poor form summoned Taniya to do some soul-searching. As she shared her depression phase, she said that she once asked herself whether she was working hard enough to deserve an India call-up. Taniya listed down all her shortcomings and at the top of the list was fitness.

She soon found her purpose and in no time she was back and running. Taniya pushed her limits and would work as hard as she could. As though like a magic, everything was back to normal. Even today, Taniya acknowledges and, in a  way, owes whatever she has achieved and whatever she will in the future, to her parents, who are also her mentors and life-coaches.

The Call all had been waiting for

Taniya’s big moment came in January 2018, when she was called up to feature in the national side in a T20 match against South Africa. This was the first time she would have the opportunity of playing shoulder to shoulder with her childhood idol Mithali Raj. In that match, she did not need to bat as India’s top order themselves finished the task with a 7-wicket victory for the visitors.

Among the 3 ODI’s that Bhatia has played, her best performance came against Sri Lanka, where she scored 68 from 66 runs as India won the match. That was also her maiden ODI half-century.

For Punjab, Taniya always played as an opener. However, in the Indian setup, she has been playing in middle order. The trait that makes Taniya’s batting unique is the comfort with which she plays her strokes against both pace and spin. She is also noted for her footwork against the spinners. An agile wicketkeeper, Bhatia is also one of the fittest cricketers in the squad.

Reflecting on the 2-year slump, she once said,

“If you fall down at a time when you’re expecting your career graph to only climb upwards, it becomes very difficult to cope with at that young age.”

Taniya Bhatia was born to a former-cricketer-turned-banker, Sanjay Bhatia and Sapna Bhatia, in the union capital of Chandigarh. She also has two siblings, an elder sister, and a younger brother. Sahaj Bhatia, her younger brother, is also a wicketkeeper. He represents Punjab in the U19 team.

Taniya Bhatia is categorized as a grade C player according to BCCI’s latest central contract system. As a result, Taniya earns Rs 10 lakhs per annum for featuring in the Indian national side. Smriti Mandhana, Harmanpreet Kaur, Jhulan Goswami, and Mithali Raj, who are all grade A players, bag Rs 50 lakh per annum.

Monish Gadiya
Monish Gadiya is the editor of KreedOn. He is a thorough tech-enthusiast and believes that innovation is the answer to all the problems prevalent in the society. Monish graduated from University of Pune with a degree in civil engineering before pursuing a post-graduate diploma course in intellectual property rights. A die-hard football fan, he has represented his college at various football competitions.
Previous articleOlympic Silver Medalist Sindhu & American Volleyball Legend David Lee Lends Support to Pro-Volleyball League
Next articleIndia Bags the Division-B Title in FIBA U-18 Women’s Asian Championship