The journey of T Natarajan is so motivating and mesmerizing that one day it could easily be adapted on the silver screen and would be a blockbuster without a doubt.

Thangarasu Natarajan has seen poverty from close where the next meal was a challenge. He hails from a poor family and his story depicts that everyone can reap the benefits of hard work if their commitment is right on.

Currently 30 years old, he is not young but each year represents a struggle and it clearly shows that Natarajan is up to the task.

T Natarajan was born in a small village near Salem in Tamil Nadu. His father S. Thangarasu use to work as a weaver on a power loom. Natrajan’s mother operates a fast-food stall. He is the eldest of 5 children. On 4th June 2018, Natarajan got married to Pavithra Natarajan in a private wedding ceremony with just close friends and family. In November 2020, she gave birth to a baby girl, Hanvika.


Thangarasu Natarajan was born in a village in Salem near Tamil Nadu on 27 May 1991.

Financially, Natarajan’s family wasn’t doing well with his father working as a porter at a railway station & his mother runs a roadside snack stall. Natarajan has 4 other siblings including three sisters. He was worried about he will take care of his family. If not for cricket he would be working as a coolie too just like his father but destiny had other plans for him. Cricket helped Natarajan to stabilize his situation and his family’s situation too.

Just like every other kid he used to play with a tennis ball as we all did at some point or the other. However, one day someone from his village saw him play and identified his skill as a bowler, and asked Natarajan to play in a local competitive team. It was after that Natarajan came to know about his abilities and the motivated Natarajan moved to Chennai and joined a cricket club in the city.

He first represented the team of BSNL in the fourth division of the Tamil Nadu Cricket Association. Natarajan then went on to play first division cricket for Vijay Cricket Club for an entire year. Later, he switched to Jolly Rovers, a popular club that has big names like Ravichandran Ashwin and Murali Vijay associated with them.

The first-class debut for Natarajan came in the Ranji Trophy on the 5th of January, 2015 when he donned the Tamil Nadu jersey for the first time. In that match, Natarajan made a huge impact in the first inning of the game, clinching three wickets to his name. Of the 16 first-class innings he has played he has 27 wickets to his name with an economy of 3.34. Natarajan came into the limelight when he represented Dindigul Dragons in the inaugural edition of Tamil Nadu Premier League (TNPL) in 2016.

With a low average and economy, and the guaranteed chance of taking wickets, Natarajan was catching the selector’s eye for upcoming Ranji Trophy matches.

Similar to Bangladesh’s Mustafizur Rehman, he earned international recognition due to his yorker ability and economic spells as well.

His short but majestic performances at the IPL 2020 earned him a call-up in the Indian Cricket Team and he hasn’t looked back since then. He made his T20 and ODI debut against Australia in December 2020.

He is expected to retain his spot on the national side in the upcoming fixtures in limited-overs.

True rags to riches story, Natarajan made history when he joined the million-dollar club when Kings XI Punjab picked him up 3 crores for IPL 2017 after his sterling performances in the domestic season and the first season of TNPL as well. He played in 6 games in his debut IPL season and picked up 2 wickets. After a mediocre season with KXIP, Natarajan was shipped to Sunrisers Hyderabad in 2018 where he has been sensational. He has made a name for himself by bowling consistent yorkers at the death overs. He was retained for the 2020 IPL season which was halted due to the ongoing pandemic of Covid 19. 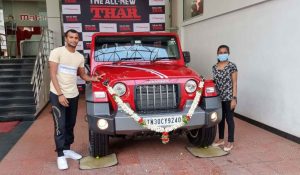 Happy Half Birthday to our little princess – As her parents, it is our sincere desire that the world heals and gets better and better as she grows. #stayhome #staysafe
PS: Thank you https://t.co/5pdz1jl67A for the wonderful shirts to make the day memorable pic.twitter.com/0Sh1lV9oRh

Playing cricket for India is the biggest privilege of my life. My #Rise has been on an unusual path. Along the way, the love and affection, I have received has overwhelmed me. The support and encouragement from wonderful people, helps me find ways to #ExploreTheImpossible ..1/2 pic.twitter.com/FvuPKljjtu

For the latest updates and stories in Indian sports (and athletes), subscribe to the KreedOn network today-
KreedOn: The Voice of #Indiansport

Aditya Mishra
Aditya Mishra is currently working as a head of content and manager at KreedOn. He is an ardent defense enthusiast and was a SSB aspirant (SERVICE- SELECTION-BOARD) during his college days. Moreover he has represented his state of C.G in All India Senior National Athletics Championship (Lucknow) and winner of several state athletics tournament (400m). Aditya did his PG Diploma from the prestigious Indian Institute of Mass Communication. With a vision to bring substantial change in India's sporting ecosystem, he along with his team are working for the development of Indian athletes.
Previous article
Life Story of Varun Chakravarthy: The Mystery Spinner of KKR
Next article
Top 10 Best All Rounder In The World Of Cricket