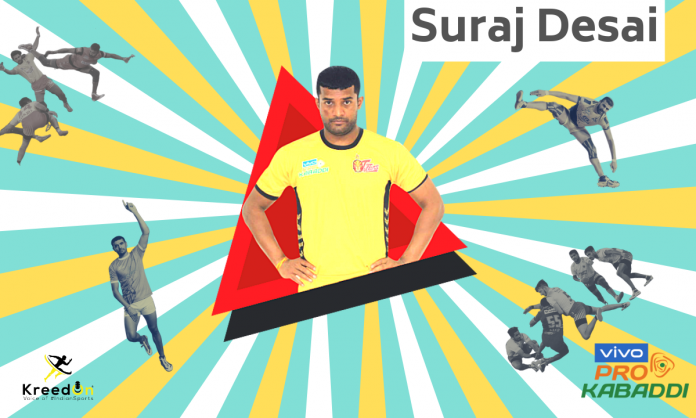 Suraj Desai is the epitome of patience and perseverance…

He had to wait for a really long to showcase his talent. Life tried to fill his road with numerous obstacles, but he was patient. He continued working hard and didn’t let his focus waver. Finding the right opportunity and platform is the biggest hurdle for every sportsperson. But what to do if after finding one you can’t even use it?

Such was the case of exceptional kabaddi player, Suraj Desai. Hardworking and talented, he started making his mark in the kabaddi world since his college days. His efforts earned him a spot in the Army, and eventually, he became a part of the Pro Kabaddi League. However, injuries plagued him, and he had to wait for a really long time to actually play. Now, he is here, and nothing can stop him.

Suraj was born in a small village in the Satara district in Maharashtra. Older of the two brothers, the kabaddi craze began at an early age for Suraj as his father used to compete in local kabaddi tournaments. In fact, the entire village was obsessed with kabaddi. Suraj and his younger brother, Siddharth, followed on the footsteps of their father and began playing kabaddi seriously.

“All the people in our village come to our house to watch the matches. They celebrate after every point I score. They sometimes even fall on each other while celebrating, burst crackers, it’s a crazy atmosphere there,” Siddharth was quoted by Scroll.in.

Suraj wanted to focus entirely on kabaddi, whereas his brother was balancing both academia and sports. The focus worked very well for Suraj, and soon he started representing local clubs. Some of them include Shahu and Sahyadri.

Suraj was selected in the army due to his stellar performances for these clubs.

On a scale of 1⃣0⃣ to 1⃣0⃣, how highly would you rate debutant Suraj Desai's performance in #HYDvDEL?

Tell us in the replies and keep watching all the LIVE action on Star Sports and Hotstar! #IsseToughKuchNahi #VIVOProKabaddi pic.twitter.com/IHrgrpuloj

Suraj officially joined Pro Kabaddi League in season 2 with Jaipur Pink Panthers. In the 5th season, he was a part of Dabang Delhi. However, he didn’t play a single game with either of the two. Suraj had to wait for his Pro Kabaddi League debut due to an injury. Finally, after he joined the Telugu Titans, he played his first game. The debut couldn’t have been more special for Suraj as he was in the same team as his brother.

“It was our dream to play for the same Pro Kabaddi team since the league launched. Finally, we could live it,” Suraj told Scroll.in

His debut for the team Telugu Titans was indeed a dream come true. He set a record for debut points by scoring 18 points. He did so in 15 raids and had no unsuccessful raids. Incidently, this record was first held by none other than his own brother, Siddharth. As long as the record stays at home. Now that’s what we call announcing his arrival on the stage in style!

Suraj Desai is the elder brother of Siddharth Desai. The two play for the same team. Suraj is married to Priyanka Desai.

In the fifth season of PKL, he was the highest-bid Category-B player in the league. He was signed on by Dabang Delhi for a whopping INR 52.50 lakh.

4⃣ was just a number when Suraj Desai raided @dabangdelhikc's defence in #HYDvDEL! Here's our 'super' moment of the day! Tune in to Star Sports and Hotstar, tonight at 7 PM, and watch #DELvCHE, LIVE! #IsseToughKuchNahi

When you have the love and support of your big brother – anything is possible!
Suraj, waited 5 seasons to make his debut in @prokabaddi and what a debut he's had. 18 pts in a single game! Phew! @StarSportsIndia #desaibrothers #surajdesai #siddharthdesai #pkl7 #bahubalibrothers pic.twitter.com/6R8oA3yu9v

There's just something about the Desai Brothers and debut records! 😍

Suraj Desai impressed one and all, delivering the best debut performance by a raider in #VIVOProKabaddi history. 💪#IsseToughKuchNahi #HYDvDEL pic.twitter.com/ImgpemzUK5

Mamta Thatte
A passionate foodie, a versatile writer, and now a sports enthusiast, Mamta is always open to exploring new avenues. She has a vast experience in Web Content Writing, Editing, and Social Media Management. A self-confessed coffee and dark chocolate addict, she believes in following her heart and giving her 100% into everything she does.
Previous articleDream11 UP vs JAI Pro Kabaddi League 2019 | PKL Prediction
Next article“Proud of India’s Gold Girl” Bollywood Reacts as Hima, Anas win gold