India smashed the back of the net on four occasions, as they thumped Thailand in their opening match of the AFC Asian Cup. Sunil Chhetri fired in a brace, and goals from Anirudh Thapa and Jeje Lalpekhlua sealed a comfortable 4-1 win for India. Sport happens on Twitter and fans on the platform didn’t hold back in showing their support, tweeting with the hashtag#BackTheBlue and #THAvIND.

Fans on Twitter were thrilled with Chhetri’s performance on the field, as India’s number 11 took his international goal tally to 67, overtaking Lionel Messi’s record of 65. As a result, Chhetri was the most mentioned player from the match on Twitter.

“Sunil Chhetri has been at the forefront of the conversation on Twitter when it comes to Indian football. His plea to fans in 2018, urging them to rally around the Indian football team, became the Golden Tweet of the year with 60K retweets.

It looks like his Tweet last year has worked its magic, and we’re now seeing a wave of support for him and his teammates whenever India take to the football field. Twitter is where football happens, and it has given fans a chance to connect with the beautiful game,” said Aneesh Madani, Head of Sports Partnerships, Asia Pacific, Twitter.

In a match that saw India dominate from start to end, the men in blue did face a slight hiccup. After India took the lead early in the first half, Thailand managed to claw back with an equalizer in the 33rd minute. When India needed someone to restore the lead, it was none other than Chhetri who slotted home a fine finish to make it 2-1 to India.

It was this goal that also featured among the most talked about moments from the match. The goal was just the start of a flurry of conversations on Twitter, with fans on the platform cheering-on goals from Thapa and Lalpekhlua. 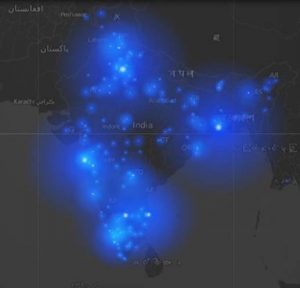 KreedOn Network
We are a team of sports writers who research about sports in India day in day out. Please reach out to us in case of any specific requirement of digital services on [email protected] .
Previous article
PBL 4: Sindhu Helps Hyderabad Win Against Ahmedabad Smash Masters 4-3
Next article
Khelo India 2019: Here are the Top Women’s Tennis Players to Look Out For

Top 20 Famous Football Players in India of All Time | Read about your favorite football player!

This is the story of India’s Original Football Hero – IM...