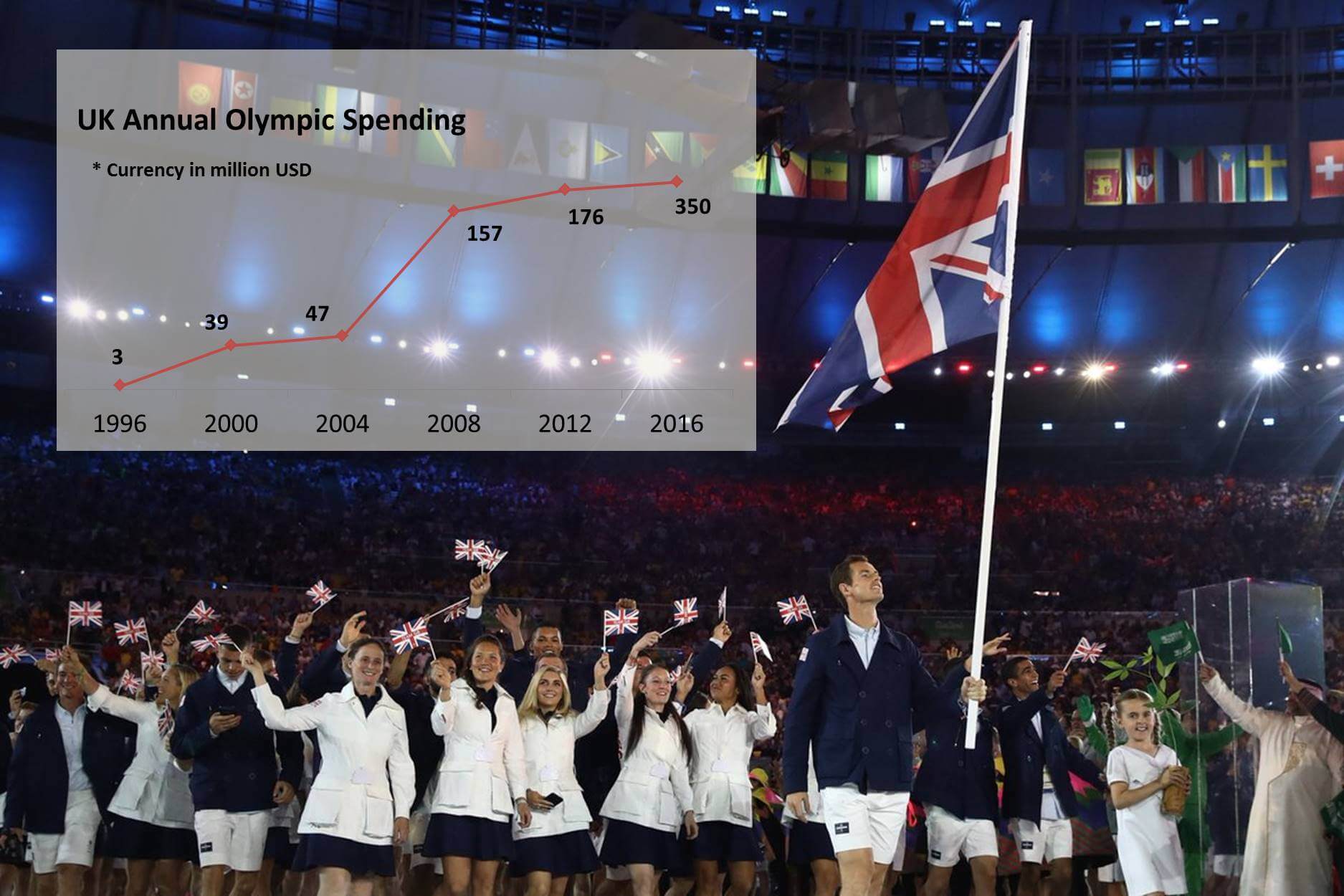 2016 Olympics got over with USA at 1st rank with 121 medals, China at 3rd rank with 70 medals and UK securing 2nd rank with a total of 67 medals. In contrast, India stood at 67th rank with 2 medals in hand. Let us have a quick comparison of sports in India and UK to analyze what can we learn from them.

Evolution of UK as a Sporting Nation

When UK finished 36th in 1996 Olympics medal tally with 15 medals, it became an awakening call for them. They started to bring in reforms in the field of sports which changed their ecosystem completely as we see today. Spending on technology, best equipment, sports medicine and development of skills in their athletes were their focus points. They have always supported their athletes and have shown faith in them.

One of the reasons for this improvement could be the consistent increase in sports budget each year. In 2016, UK’s sports expenditure was $1.5 billion, which excluded the 4-year Olympic preparation budget. For the 1996 Olympics, they had spent just $3 million. They raised the Olympics budget to $157 million to finish at 4th rank with 47 medals in 2008 Beijing Olympics. They further elevated the Olympic budget for 2016 Rio Olympics to $350 million and finished 2nd. On an average, each medal cost them UK $6.8 million.

Sports in India: Comparison to UK

Talking about India, we had a sports budget which is 1/3rd of the budget of UK in 2016. Due to the lack of funding our number of sports federations have dropped from 57 to 49 as of 2016. We invest in more number of athletes than UK, which in turn reduces the per athlete fund available. Of the amount spent on sports infrastructure and coaching, only 8 percent is spent on special coaching to athletes.

For the 2016 Olympics, Indian Olympics Association(IOA) received brand sponsorship from various brands like Reliance Jio, Edelwies, Amul and Tata. Recently, India Infrastructure Finance Company Limited, a public-sector company, contributed Rs 30 crore to the National Sports Development Fund (NSDF) for three years. The funds available to NSDF during the period 2010-13 was INR 61 crores, of which they spent only 19.47 crores. This implies that having more and more funds is important, but the allocation of available funds in a proper manner is more important.

Having said all this, our government has identified the need of the hour. We have increased our spending a bit on sports technology, infrastructure etc and starting to catch up with the world in these fields. Niti Ayog has given a recommendation report named “Play On” which contains an action plan to win 50 medals in 2024 Olympics.

KreedOn Network
We are a team of sports writers who research about sports in India day in day out. Please reach out to us in case of any specific requirement of digital services on [email protected] .
Previous articleNITI Ayog’s plan to transform Indian sports
Next articleThe Great GAMA Wrestler -The Champion Lost in History- KreedOn