How the faulty system is obstructing the growth of Sports in Andaman? – Know Here

The Introduction: Sports in Andaman

Andaman has got many talented athletes. Still, it has not been able to show impressive results in the last few years. The secretary of the Athletics Association of Andaman Abdul Rafique said over the phone,

“We have been participating in the nationals in all age groups. But have not been able to bring medals. I was a 400-meter middle-distance runner. I know that unless the system is changed it will not be possible for even a promising athlete to reach the next level.”

Andaman Athletics Association in recent years even has not been able to send its athletics team to the National Games consistently. They took part for the first time in the 33rd National Games in Guwahati. Then in the Games this year, held in Gujarat, only cyclists took part and won medals also. But no athletics team could be sent by the state association.

“In Port Blair, 25 to 30 enthusiastic school students practice athletics while 25 to 30 school students train at the Nicobar Islands. The students go to school in the early morning. Naturally, they cannot train in the morning and practice only in the evening for one hour or one-and-half hours which cannot help them to improve their standard at all. This system has been going on for years. Naturally, if the system of this one-session training cannot be changed then how can the standard of athletics improve?”

Sports in Andaman: The Worst Infrastructure 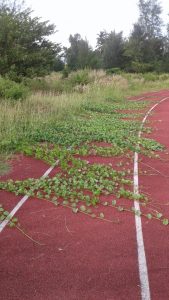 The athletics in Andaman does not have the minimum required infrastructural support. Rafique admitted,

“There is one stadium in Port Blair, Netaji Stadium and it has no synthetic track. The students are compelled to run on an uneven and rough natural track. Nicobar has the only synthetic track where local tribal boys and girls practice.”

Sushanta Roy, one of the experienced and senior athletics coaches from Bengal was in Andaman for eight years in two phases. Commenting on the poor state of the game there, Sushanta explained,

“The one and only synthetic track that has been laid at the Nicobar Islands is of poor quality. It was sanctioned by then Prime Minister Manmohan Singh. Around Rs 8 crore was released for the installation of the track. But surprisingly, the very poor quality of the track was laid and due to lack of maintenance, you can find holes in the track. During the rainy season, water is logged on the track.”

Roy also expressed disappointment in the lack of intention among the athletics officials to develop the game.

According to the association secretary, the sports in Andaman also lack qualified coaches. Still, the athletes who practice in Port Blair get the opportunity to train under one licensed coach but there is no coach for the athletes at Nicobar. Rafique lamented,

“The local sports department has to take the call. We submitted a proposal to lay out a new synthetic track around the Netaji Stadium at Port Blair but we have not yet received any positive response.”

The Sports Authority of India (SAI) in Nicobar has one licensed coach for athletics. But according to Rafique SAI does not seem to be willing to promote athletics.

“Rather they want to promote cycling and other water sports. That has been another reason behind the stagnation of the game’s development,”

Aditya Mishra
Aditya Mishra is currently working as a head of content and manager at KreedOn. He is an ardent defense enthusiast and was a SSB aspirant (SERVICE- SELECTION-BOARD) during his college days. Moreover he has represented his state of C.G in All India Senior National Athletics Championship (Lucknow) and winner of several state athletics tournament (400m). Aditya did his PG Diploma from the prestigious Indian Institute of Mass Communication. With a vision to bring substantial change in India's sporting ecosystem, he along with his team are working for the development of Indian athletes.
Previous articleTop 10 Best Golf Players of All Time | The Best Putters that the game has ever witnessed
Next articleTop 10 Best Cricket Books Ever | Dive into the World of Cricket

Hilal Rasool emphasizes the rebirth of football in Kashmir – KreedOn...

Rohit Jangid is the pathfinder of Wushu in Rajasthan

Nitu Ghanghas, The inspiration for all small town girls