The union budget announced today is touted as a pro-poor and pro-agriculture budget by financial wizards. As far as sports budget is concerned, the 40% hike that it received in 2017 will continue throughout 2018 as well.

Sports Ministry got a significant hike of Rs 350 crore in the union budget for 2017, presented by Finance Minister Arun Jaitley and the same will be continued till the end of next financial year. In total, at the 2017-18 budget, Jaitley allocated a total of Rs 1943 crore in contrast to Rs 1592 crore earmarked in 2016. This significantly boosted the sports budget by 40%.

The Sports Authority of India who was expecting a substantial hike like last year had to be satisfied with the same numbers this year as well. The major hike in sports budget was mainly due to the Khelo India program, which is taking shape now. The Prime Minister on 31st January, 2018 inaugurated India’s first ever Khelo School Games, a first of its kind initiative to develop a sporting culture in the country.

After Indian athletes’ dismal show in the Rio Olympics, where Sakshi Malik and PV Sindhu were the only two medal winners, PM Modi was first among others last to root for better allotment of sports budget. Taking the understanding of the degrading conditions, the countries ‘supremo’ promised betterment.

His first real tough decision to revive sports came with the appointment of a sports person at the helm of affairs. Former Indian army athlete and 2004 Olympic medallist Dr Rajyavardhan Singh Rathore was appointed as the Union Sports Minister. He is actively taking part in almost all sports events that he could and is also keeping track of the progress of the Khelo India program.

India will take part in two of the biggest sporting events this year. The Commonwealth Games and the Asian Games 2018 will determine how well the Indian contingent performs at the 2020 Olympics.

With the Commonwealth Games around the corner, it will be an opportunity for the Sports Ministry to provide more stability to the already existing structure. The funds allocated are just enough; to give athletes everything they require preparing for the elite tournaments.

The state federations play a crucial role in bringing up the players from the ground level. The budgetary allocations to them will help the federations nurture talent and polish them for the bigger stages. The likes of Haryana, Punjab, Uttar Pradesh, Maharashtra, Karnataka and northeastern states have been constantly producing tremendous athletes who have been phenomenal at the national and global level. These states would be getting a good chunk of the sports budget. If you remember, in the 2016-17 sports budget, the allocation for the scheme for the Benefit of North Eastern Area was increased to Rs 148.4 crore from Rs 131.33 crore.

A thought to ponder for the Finance ministry is that every time when it improved allocation, it will be important for them not miss out important factors. Those factors are assistance to the national sports federations and funds for promotion of sports among disabled. As of now, the budget for Khelo India also includes the promotion of the disable category, which needs to be rethought. More than our physically able athletes, it is the disabled athletes who are consistently delivering on big stages, including Paralympics.

Here is an infographic indicating the funds distribution and development of sports via sports budget: 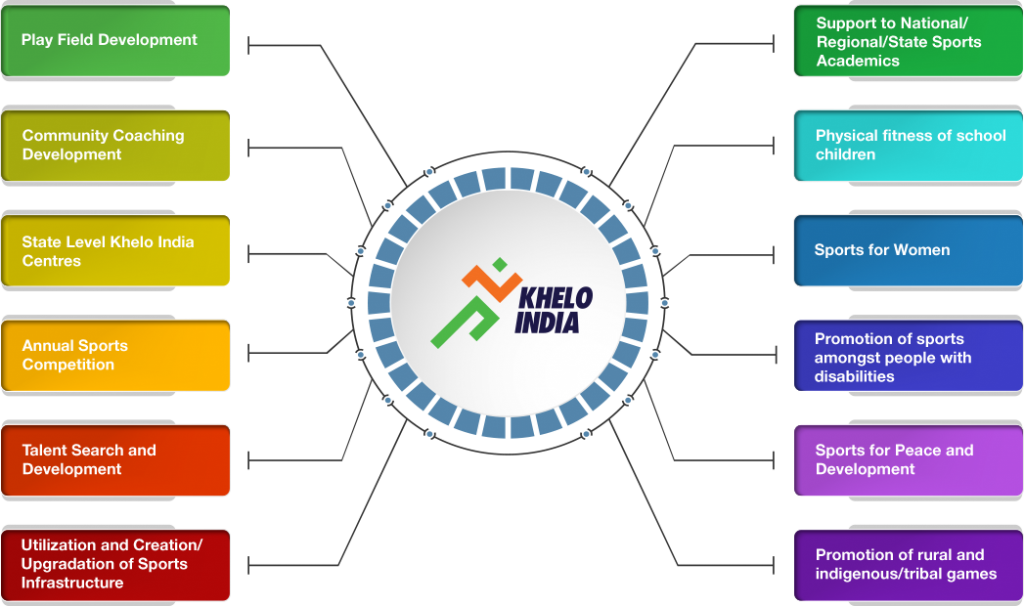 Vardan Pandhare
Vardhan is an author who loves creativity. He enjoys experimenting in various fields. After completing his graduation, he was sure about one thing! His love for sports. He is now living his dream of being creative with words in the field of sports. He has since then always brought the latest news and updates for all the sports fans.
Previous article
Khelo India Games – A New Chapter in Indian Sports Begins
Next article
India Under 19 World Cup – The Future Stars of Indian cricket have arrived!

Maharashtra has a Field Day at Khelo Games – Win Weightlifting...