Sonia Lather Biography: From Playing on Kabaddi Courts to Glory in the Boxing Ring

The Jakarta Palembang Asian Games turned out to be grander than expected. Athletes from various Asian countries were fighting it out in the field. It was very heart-warming to see that our cricket-obsessed nation is celebrating the energy of the Asian Games with much gusto!

Indians had already 23 reasons to cheer. We had six gold, four silver, and thirteen bronze medals in our kitty. The number was simply going to increase!

Today, we will discover the life story of an inspiring athlete, who was a major medal prospect of India during that international event. Her story of grit and determination will motivate you to no end.

Sonia comes from a humble farming family from Haryana. No one from her family has pursued a career in sports, let alone boxing.  Her father, Prem Singh is a farmer, whereas her mother, Nirmal Devi is a housewife.

Coming from an orthodox village, she had to fight a lot of stigma and prejudice. However, she did not let these factors deter her from her goal. Fortunately, her family has always encouraged and supported her.

Sonia started boxing in 2008. She wanted to find an outlet to vent out her anger. Soon, it turned in to her passion and eventually her dream. She started working hard to maintain her fitness levels and increase focus.

Last few years have been really tough for Sonia. Her elder brother was first arrested in a murder case three years ago. Immediately a year later, her younger brother was arrested. Her father met with an accident and needs constant care.

Since 2007, coach Anoop Kumar is training Sonia. Anoop Kumar is working with the National camp since 2001. He has been very confident of Sonia. In an interview after the 2016 World Championships, he told ESPN,

“I’m not saying a medal was certain in the 60 kg category had Sonia been picked, but she certainly wouldn’t have fared too badly. Since we don’t have a national federation, the selection trials were also affected. Sonia has been training under me since 2007 and she has the will and tenacity to be India’s best bet in the 60 kg category.” 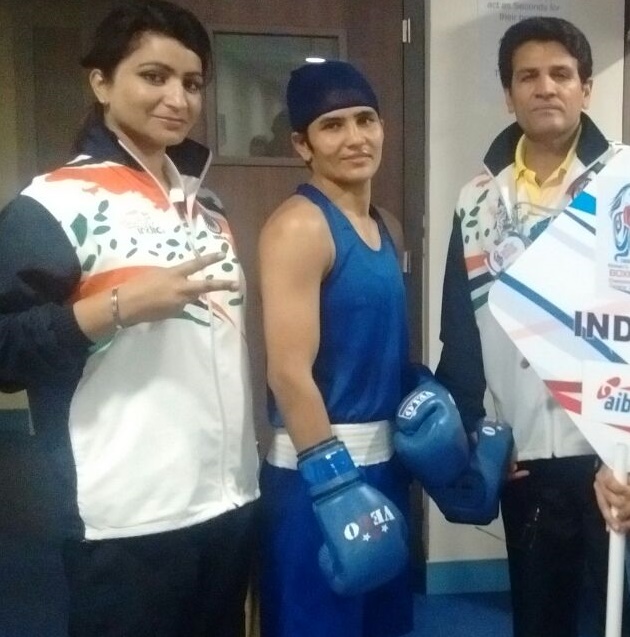 The Indian men’s and women’s #Boxing teams at the #AsianGames2018 Village in #Jakarta.

Sonia suffered a lot of discrimination as a female boxer. Coaches used to change every now and then. Sometimes, they had to settle with coaches from the men’s boxing team and there was no consistency. She had to fight the system and was denied opportunities as a result. However, the situation is slowly but steadily improving as per Sonia. Earlier there was hardly any support, but there is some positivity now.

‘Women’s boxing is picking up in India, players need tournaments, and they are providing it to them. The more the competitiveness, the more the experience, the more improved the players would become. This federation is working better than the earlier one. Previously, there were hardly four tournaments played, but it has increased now. We will also host the 2018 AIBA Women’s World Championships,’ Sonia told Bridge.

Asiads and the Road Ahead

“I want to repeat the show again in Asiad. My preparations have been good and received a lot of help from our foreign coach Raffaele Bergamasco, who helped to learn new techniques,” Lather told IANS.

Sonia believes in staying calm and composed before the bout. She makes strategies on the spot depending on the situation. This helps us stay focused on her game. Thinking too much before entering the ring can be counterproductive. It is very heartening to see a young woman, who hasn’t had it easy, focusing only on the positives.

Whatever snubs the federation may have given her or the doubts her folks had about her, are all in the past. This quality is what makes Sonia a true champion. Her dedication to her sport is immense. We are sure that this pugilist will make us proud at the ongoing Jakarta Palembang Asiads. Here’s wishing her success in all her future endeavours.

Sonia Lather Singh was born to Prem Singh and Nirmal Devi on 10 February 1992 in Jind, Haryana. Her father, Prem Singh is a farmer whereas her mother is a housewife. She also has two sisters and a brother. Sonia is unmarried as of yet.

Outstanding Railways Sportsperson of the year 2016

#comingsoon Sr.. National … Give me blessingand #support #me ??

Mamta Thatte
A passionate foodie, a versatile writer, and now a sports enthusiast, Mamta is always open to exploring new avenues. She has a vast experience in Web Content Writing, Editing, and Social Media Management. A self-confessed coffee and dark chocolate addict, she believes in following her heart and giving her 100% into everything she does.
Previous article
Never Say Never: Once a National Footballer, Now Running a Tea Stall; Kalpana Roy Still Nourishes her Athletic Dream
Next article
Women’s World Boxing Championships: Mary Kom Registers an Easy Win to Enter Quarters; Manisha and Lovlina Storms into Next Round