A smashing partnership of 116 runs between vice-captain Smriti  Mandhana ( 72 runs, 40b, 7×4, 4×6) and captain Harmanpreet Kaur ( 45 runs, 39b, 6×4, 1×6), paved way for a four-wicket win for India-A Women Cricket Team against in the opening T-20 match against Australia-A. The match was played at the Sharad Pawar Cricket Ground in Mumbai on Monday. 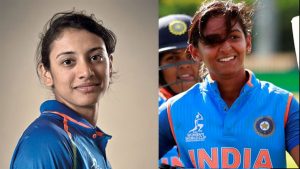 The association between Smriti and Harmanpreet for the third-wicket ensured the team to chase the target of 161 runs comfortably. The team stuttered when Harmanpreet, Anuja Patil and D.Hemlatha got dismissed at the successive overs, thus leaving the team at 143-6 in the 18th over. It was then, team India’s all-rounder Pooja Vastrakar (21*runs, 9b) and Deepti Sharma (11*runs, 7b), who both lead the team’s way towards the win.

With the series being played prior to the departure of Women’s team for World-20, this game will definitely provide a major boost to Team India.

Bhawna Kothari
Lover of cultures, varied colors, and underdogs, Bhawna is a by-heart and professional playwright. Hailing from a journalism & communication background, she incorporates a careful study at both flips of the coin which is essentially required to be analytical in thoughts and words. Actively abreast of the current affairs around the globe, she likes knowing and bringing into light the unexplored. Problem solving via the power of content is what inspires her and hence KreedOn, a platform created for the betterment of sports ecosystem in India, is now her happy workplace!
Previous article
It’s a Silver for Bajrang Punia; 1st Indian with 2 World Wrestling Championship medals
Next article
Viswanathan Anand Manages to Scrap a Draw against Robert Hess

Indian women’s ‘A’ team to tour Australia in December for a...