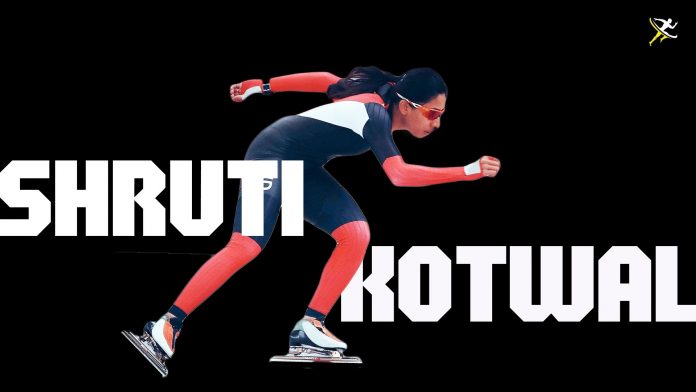 The word ‘Olympics’ in India is very much synonymous to the Summer Olympics. Not many are aware of the colder version of the global sporting extravaganza, the Winter Olympics. And in such a case, it isn’t surprising that sports like Ice Skating, Ice Hockey, or Curling are not known to the masses. Afterall, with the country’s location near the Equator matched with the average sporting culture, one can hardly expect more.

So what is it like to choose a career which can be precarious in India due to unpopularity, uncertainty and lack of infrastructure? What does it take to break the shackles of stereotypes and gender inequality? Is it sheer determination or an over-optimistic hope to achieve big in such a domain? Well, the inspiring tale of India’s fastest Ice Skater, Shruti Kotwal answers these and many other questions.

The sight of kids swivelling through the streets with their skateboards or roller skates, especially in the suburbs, is not uncommon today. While a majority of them pursue skating as a pass time, there are a few who rake it up as a career and a dream to perform on a grander stage. Shruti Kotwal, a national record holder, is one such example. Hailing from Pune, hers is a tough yet incredible journey through the winds of adversaries.

The prelude to a magnificent career

While the journey of Shruti began with roller skating at the age of seven as a hobby, it transitioned to ice skating due to the lack of international opportunities in the former. Even before switching to Ice Speed Skating, Shruti dominated roller skating events in India.

“I’m a national-level gold medallist in roller skating. But it had minimal opportunities on international front. And frankly, the local politics was quite demotivating. Eventually, I decided to give ice skating a shot.” she revealed.

Moreover, Shruti was also fascinated by the “explosivity and agility needed for the sprinters coupled with strength and endurance” in Speed Skating.

However, exciting her decision was, it was also a completely new beginning. She had to relearn a few tricks in the book and modify her practices to the newly chosen sport. The lack of facilities on offer further made it difficult for the determined young lady.

“There’s only one Ice Skating training camp in a year, that too in Shimla. With that amount of exposure, it is next to impossible to beat the seasoned opponents on an international stage,” Shruti explained, highlighting the plight of ice skaters in the country.

But what defines a winner is the ability to adapt and thrive in the most arduous scenarios. And Shruti did just that.

While others in Shimla got access to ice rinks round the year, Shruti would practice roller skating back in Pune, her hometown, before the National camp. This depicts the sorry state of Indian sports ecosystem which fails to provide the bare minimum infrastructure for an Olympic sport.

What is Ice Speed Skating?

In layman’s language, Ice Speed Skating is a drag race on ice. The game originated in the Netherlands and was included in the first Winter Olympics in 1924 as a men’s event. It was in the 1960 Games in Squaw Valley, the United States, women’s speed skating was added.

Into the era of success

At times efforts put up by people don’t get the needed facility to thrive upon. But as they say, destiny always finds the address of the determined. With a mediocre infrastructure for ice skating in India, fortune yielded Shruti Kotwal a break in the form of a scholarship from the International Skating Union (ISU) in the year 2012.

The opportunity presented her to try out Speed Skating in Germany. It was no mean achievement, since it was her first global recognition. More importantly, this was also the first recognition for any athlete in India from the organisation.

And as if that was not enough, Shruti’s performances caught the attention of none other than Jeremy Wotherspoon, regarded as arguably the world’s greatest speed skaters ever. He proposed to coach her. Talk about the combination of luck and hard work!

“I was overwhelmed when I got to know that he (Jeremy) would be my coach. I always wanted to learn from basics, and there was no one in India who could teach me that. All the ice skater s in India are pretty much self-taught,” expressed an elated Shruti while speaking to KreedOn.

It was upon his suggestion that she decided to move to Calgary, Canada, considered the best place to hone skating skills.

“I was not confident since I was in college and still studying. I had to completely move my base and live alone. Nobody had done something like that before in my family. But it was my family, especially my mother, that supported me. They literally forced me to go to Canada!” she remembers fondly.

From there on, there was no looking back for Shruti. She went on to beat her own records. In fact, she started to gaze herself as her first opponent.


Shruti Kotwal credits her family for pushing her to strive for her dreams. There was never a jitter of unwillingness or lack of support from her family in her pursuit of dreams as India’s best female ice skater. For her, it was as if the entire cosmos is pushing her to achieve something great.

“My family is my support system. They are extremely proud of me and encourage me. My mother is my backbone my father always is like a rock, and my siblings are my biggest cheerleaders, and most of all, my husband is my biggest fan and motivator. My journey would be impossible without my family and their unlimited help and support.”

It is not normal, especially for a woman, to break away from stereotypes and choose a path which was hardly ventured by anyone before. But Shruti Kotwal presents a case; wherein one can see what passion and desire to succeed can bring out of an individual.

Shruti’s moment of life occurred at the South Asia Championship, 2011 when she secured gold medals in categories of 500m, 1000m and 1500m. Nothing more could define her hard work throughout the journey. But the hunger to succeed didn’t stop there, and Shruti continued to bring glory.

Making of the Champion Ice Skater


Skating demands an enormous amount of lower body strength, core and back strength, flexibility along with strong ankles. Not to forget, the balance required while skating.

Shruti’s day starts early. With two training sessions scheduled for a day, one happens in the morning and the other either in the afternoon or evening. While the former includes training on ice for up to three hours, the later one works on the development of strength and endurance. While cycling and running focus on the endurance part, weight training and bodyweight exercises take care of the strength aspect.

Dryland training is also a part of her practice. It simply means imitating the skating movements of the ice or off the skates

Even while training passionately and chasing her dreams, Shruti makes sure to have quality time with friends and family doing all those things a family woman does. When not training, you may find Shruti sharpening her skates, readying herself for the battle ahead.

Shruti Kotwal has fixed her next target- to qualify for the Skating World Cup next year. And to do that, one needs to achieve the given distance in a provided time period at the qualifiers. If she succeeds, Shruti would be the first Indian to do so.

Had there been a better infrastructure for Ice Skating in India at that time, Shruti wouldn’t have gone through all these struggles. More importantly, she has to meet all her requirements at a personal cost.

We often buy artefacts just by looking at its beauty, failing to recognise the efforts put in by the artist. Similarly, in India, you need to prove your mettle for attracting sponsors. But what one needs to understand is that success needs support and the right resources before reaching for glory.

There exist many such Shruti Kotwals, and we sit back and wonder why India is not so dominant in the Olympics. The answer probably lies somewhere in the story of Shruti Kotwal…

KreedOn Network
We are a team of sports writers who research about sports in India day in day out. Please reach out to us in case of any specific requirement of digital services on contact@kreedon.com .
Previous articleDenmark Open 2019 Day 2 update: Here’s India’s performance so far
Next articleWatch: Mary Kom, Dutee Chand & Sara Khan join hands for Puma campaign