On 21st November, 2017, at the Luge World Cup in Innsbruck, Shiva Keshavan qualified for the 2018 Winter Olympics at Pyeongchang. This will be Keshavan’s sixth Winter Olympics and his fifth representing India. Keshavan is India’s most decorated winter sportsman with a lot of accolades to his name. Let’s take a look at his life and journey.

Shiva Keshavan was born in Manali in 1981 to an Indian father from Kerala and to an Italian mother. When he was just 14, Keshavan won the National Junior Ski Championship. The following year, he attended a luge camp conducted by world champion Gunther Lemmerer. He got selected and began training in luge.

Shiva Keshavan became the first Indian to qualify for the Winter Olympics by qualifying for the 1998 Winter Olympics at Nagano, Japan. This also made him the youngest Olympian in luge. At the 1998 Olympics, Keshavan came 28th out of the 34 contestants in the Men’s Singles event with a timing of 3 minutes and 18 seconds.

Keshavan qualified for the 2002 Winter Olympics at Salt Lake City and was offered to represent Italy because his mother was Italian and he lived in the country for a long time. However, Keshavan declined the offer and preferred representing India.

Asian Championships in Nagano. Keshavan qualified for his third successive Winter Olympics at Turin. At the 2006 Winter Olympics, Keshavan ended 25th out of the 36 participants with a timing of 3 minutes and 31 seconds. This remains to be his finest Olympic performance in terms of ranking but his then worst in terms of time taken.

2011 was a brilliant year for Keshavan as he won his first gold medal at the Asian Luge Championships in Nagano and he did it in remarkable fashion. At the tournament, Shiva Keshavan created a new Asian speed record of 134.3 km/h (83.5 mph), bettering the previous record of 131.9 km/h (82 mph).

Keshavan retained his title in 2012 by setting a new Asian track record of 49.590 seconds. In the same year, Keshavan was nominated for the Arjuna Award but lost out to 24 sportspersons across 16 sports including Yuvraj Singh, Deepika Kumari and Vikas Krishan. He was also nominated for the Pasruram Award which is bestowed by the Government of Himachal Pradesh. Keshavan was felicitated with NDTV’s “Outstanding Performance of the Year” award.

He was unable to make it a hat-trick of gold medals at the Asian Luge Championships as he had to settle for the silver medal in 2013.

Shiva Keshavan qualified for the 2014 Winter Olympics at Sochi but this time, he would have to play as an Independent Olympic Participant due to the suspension of the Indian Olympic Association on the basis of corruption, interference of government and not following the guidelines set by the International Olympic Committee. 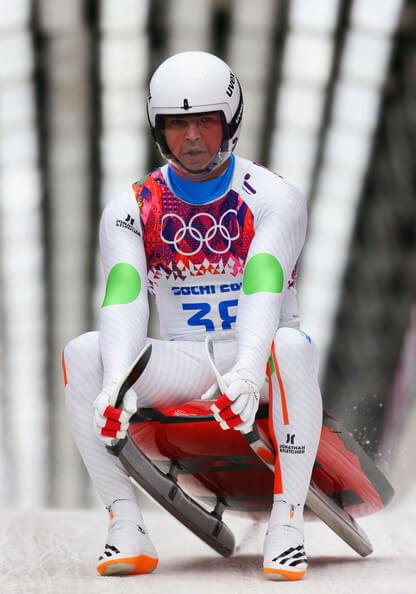 In November 2014, Keshavan collaborated with Luge World Champion and three-time Olympian Duncan Kennedy. This made Kennedy his personal coach. Kennedy had previously been a commentator for NBC Sports during the luge competitions at the Winter Olympics from 2002-2014. At the 2014 Asian Luge Championships in Nagano, Keshavan won the silver medal.

Keshavan’s confirmation of a 6th appearance in the Olympics came in the first of his five qualifying races. In the ongoing Luge World Cup at Innsbruck, Keshavan is currently ranked 23rd out of the 57 participants. Keshavan stated that having booked a place in the 2018 PyeongChang Winter Olympics is a huge relief and he can now concentrate on producing a better performance in his remaining races at the World Cup and reach closer to the leaderboard.

Shiva Keshavan is undoubtedly India’s most decorated Winter sportsman. He was offered to represent Italy (who have ended in the top 10 of the medal tally in 13 of the 23 editions of the Winter Olympics), but Keshavan declined.

Even though his performances in the Winter Olympics haven’t been very good, he has still been consistent in qualifying regularly. The 36-year old has improved significantly under the tutelage of Duncan Kennedy and has been performing really well in major tournaments lately. Keshavan is expected to produce his finest Olympic performance at PyeongChang. If he keeps on working hard, he might even have a chance of giving India her first medal in the Winter Olympics.

Shiva Keshavan was just 16 years old in 1997 when he first represented India in luge. Since then, he has made it to every edition of the Winter Olympics. He became the youngest luger to qualify for the Olympics.

During his illustrious career, Shiva made every Indian proud while making a big impression internationally. He has won a quite a few medals and honors. But the Gold medal at the Asia Cup in Nagano is his biggest win till date.

In the process of winning this medal he also set the Asian speed record, which now stands at a whopping 149 km/h.

He is undoubtedly India’s premier winter sports athlete. We wish him all the best as he aims for greater heights in his career!

A luge is a small one- or two-person sled on which one sleds supine (face up) and feet-first. Steering is done by flexing the sled’s runners with the calf of each leg or exerting opposite shoulder pressure to the seat.

Of the three Olympic sliding sports, which include bobsleigh and skeleton, luge is the fastest and most dangerous. Lugers can reach speeds of over 150 km/h. Lugers compete against a timer and are timed to a thousandth of a second. This makes luge one of the most precisely timed sports in the world.

Neelabhra roy
Reading, Writing and indulging in sports activities have been Neel's passion since he was a child. He grew up playing various sports and knew that it was something he wanted to stay in touch with. After completing his graduation, he narrowed his focus on writing. In his leisure time, he likes to read books and chill with his dog.
Previous articleCommonwealth Wrestling Championship: It’s a Medal fest for Team India’s Wrestlers
Next articleTracing the journeys of Kuldeep Yadav and Yuzvendra Chahal