“IWF reports that the sample of Ms. Sanjita Chanu KHUMUKCHAM (IND) has returned an Adverse Analytical Finding for Testosterone (S1.1 Anabolic Agents). As a consequence, the Athlete is provisionally suspended in view of a potential anti-doping rule violation,” the IWF wrote on its website.

Gloomy days ahead for Sanjita Chanu

“In any case where it is determined that the Athlete did not commit an anti-doping rule violation, the relevant decision will also be published. IWF will not make any further comments on the case until it is closed,” it added.

24-year-old Khumukcham Sanjita Chanu, who was also the champion of Glasgow Commonwealth Games 2014, won the gold medal for the country at the Gold Coast CWG in the 53kg category in weightlifting, as she lifted 84kg in the snatch category and 108kg in the clean and jerk category.

Chanu, who has been provisionally suspended and stands the chance of having her CWG 2018 gold medal, revoked as well as being banned for four years, was initially included in India’s team for the 2018 Jakarta Palembang Asian Games. 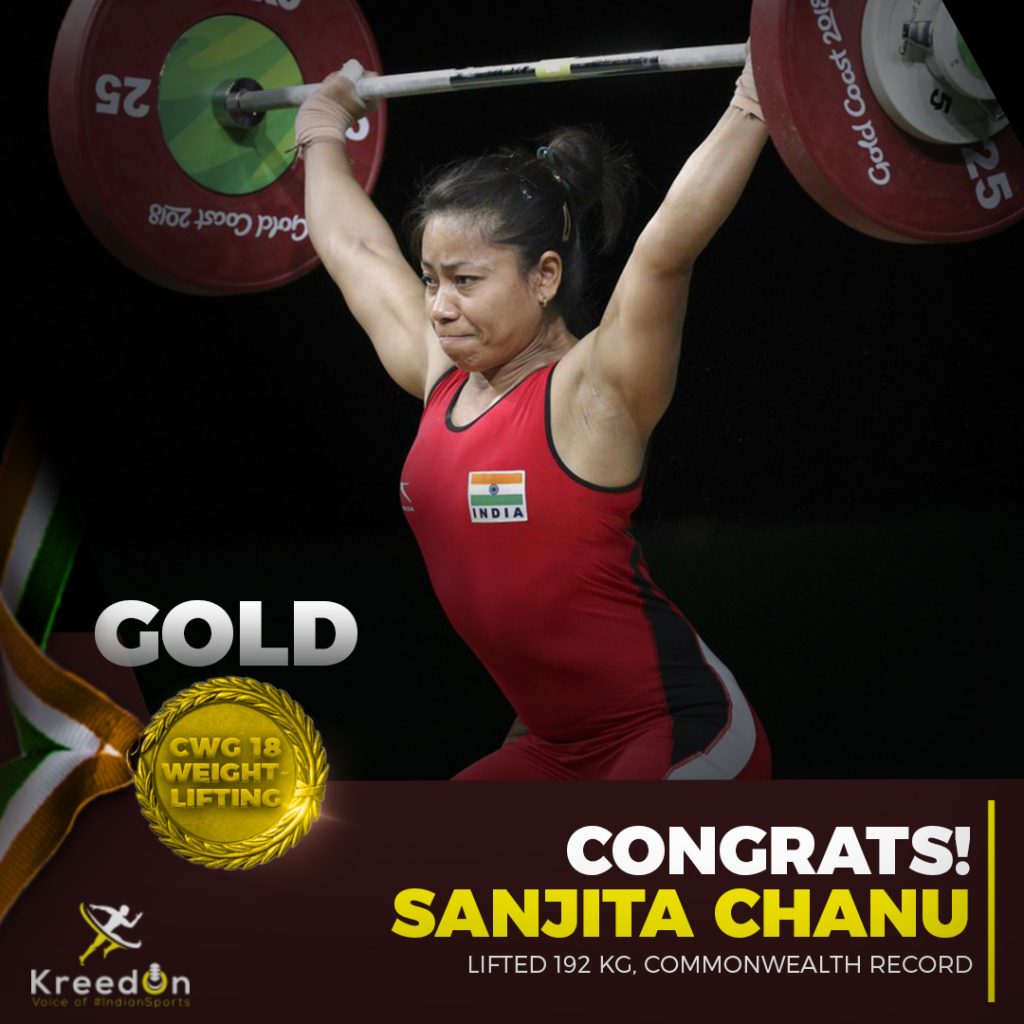 Sanjita Chanu said she will challenge the provisional suspension imposed on her for allegedly failing a dope test, insisting that she is innocent.

“I am innocent; I have not taken any banned substance. I will challenge this with the help of the national federation,” Sanjita told news agency PTI.

She, however, got the backing of the Indian Weightlifting Federation (IWLF) President Sahdev Yadav, who said he was confident of the Manipuri’s innocence.

“We don’t understand why the dope result took so long. After the sample was taken, she competed in the World Championship in November last and then she won a gold in the Gold Coast CWG in April. We will fight it out why this is happening,” he told PTI.

“In any case, we have written that we would go for the ‘B’ sample test. After we got the results we will hire a top lawyer to present our case at the hearing (at the international federation). I am sure Sanjita has not taken any banned drugs. I am confident we will prove her innocence,” he added.

Yadav also said that there was no danger of India losing the gold medal won by Sanjita in the Gold Coast Commonwealth Games in April. She lifted a total of 192kg to win that gold in 53kg category. She had also won a gold in the 48kg category in the 2014 CWG in Glasgow.

If Sanjita’s ‘B’ sample also tests positive, she could be handed a four-year ban from the sport.

Sanjita had taken part in the 53kg class in the World Championship last year, finishing 13th with a total lift of 177kg.

The 24-year-old was, on May 9, included in the Sports Ministry’s Target Olympic Podium Scheme for her Asian Games preparations. But her name is expected to be struck off from the list if she is finally ruled to have committed the dope offence.

The latest dope flunk will hit Indian weightlifting hard after a clean recent past, especially after Mirabai Chanu’s 48kg category gold medal in the World Championship.

After a dope free 2016, one weightlifter -Sushila Panwar returned positive in a test conducted by the international federation. Sanjita’s case is the first positive result of this year.

Recently, the International Weightlifting Federation decided to punish offending countries by limiting their quotas for the 2020 Tokyo Olympics after the IOC asked them to clean the tainted sport.

It was decided that countries like Russia, Kazakhstan, Azerbaijan, Armenia and Belarus will be given only two places each at Tokyo 2020. The new rules state that any nation with 20 or more doping violations from 2008 to 2020 will have just one man and one woman at the Games.

Countries with 10-19 doping violations over that same period will be limited to two men and two women in Tokyo. At least nine more countries, including Bulgaria, Iran and India fall into that category.

This decision to limit Olympic quotas, however, will not have much impact on India as the country has not been sending more than two weightlifters each in men and women’s sections in the Olympics during the past few editions.

Before Sanjita’s case, 12 Indian weightlifters had returned positive in tests conducted by the international federation since 2008.

Vardan Pandhare
Vardhan is an author who loves creativity. He enjoys experimenting in various fields. After completing his graduation, he was sure about one thing! His love for sports. He is now living his dream of being creative with words in the field of sports. He has since then always brought the latest news and updates for all the sports fans.
Previous article12 Celebrities who took Sports Minister’s Fitness Challenge
Next articlePro Kabaddi League – Iran’s Atrachali becomes the first Crorepati of the Auction

I’m Innocent; This is a Conspiracy against me – Sanjita Chanu