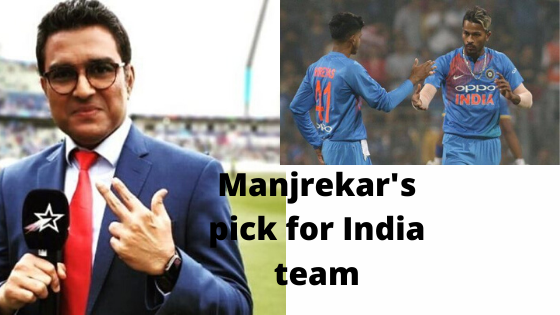 Former Indian cricketer Sanjay Manjrekar, who was terminated recently from the Cricket Control Board in India’s (BCCI) commentary panel, named Shreyas Iyer as India’s No 4 and Hardik Pandya as the all-rounder choice in the upcoming ICC World T20 in Australia.
https://twitter.com/sanjaymanjrekar/status/1241965599338553344?s=20

Throughout the limited-overs series, Iyer was in good touch in New Zealand, where Iyer ended as the top run-scorer in the ODIs despite India losing the 3-0 series. He scored 217 runs at an average of 72.33 in 3 innings with a strike rate of 95.59. He was also successful in the earlier played T20Is, scoring 153 runs in 5 innings with a 131.90 strike rate.

Pandya, on the other hand, was expected to make a comeback against South Africa in the three-match ODI series that was cancelled due to coronavirus outbreak. The allrounder also displayed positive form glimpses when he scored two centuries in the DY Patil tournament.

Hardik Pandya recently got engaged to Serbian model, Nataša Stanković as he proposed to the Serbian on a yacht in Dubai. Pandya had been out of cricketing action for quite a while now, as he was nursing an injury to his back.

Both players were scheduled to play the Indian Premier League (IPL) that was postponed due to the COVID19 pandemic that has caused a huge blow to sports.

Given the current circumstances, Prime Minister Narendra Modi has declared a lockdown across the entire nation. This means that the IPL, which was due to start next month after being postponed, seems to either get postponed further or cancelled this year.

It is estimated that the league could lose in excess of Rs 2000 crore in revenue as each franchise could lose more than Rs 100 cr.

The next few weeks are crucial to the country’s overall health for the next 2 decades. We must adhere to all the rules laid out by the government so as to fight this pandemic once and for all.

Warad Bhat
Warad is passionate about brands, football, films and food. He enjoys reading about latest gadgets and technologies and spends his time either watching movies or cooking something new. Warad is a spiritual person who believes that to change the world you must change yourself from within.
Previous articleCOVID19: 2020 Tokyo Olympics becomes the latest victim of coronavirus
Next articleWatch: Sports fraternity reacts to 21 day lockdown amid COVID-19

6 Reasons why India lost yet another Test Series against SA