Sandeep Warrier is an Indian Cricketer who has been displaying his talent to swing the ball magically for quite some time now. Sandeep plays for Tamil Nadu at the domestic level and made his T20 International debut for India in 2021. He made his T20I debut against the Sri Lankan team in Colombo.

Sandeep began his domestic cricket playing for Kerala but the right-arm fast-medium bowler switched to Tamil Nadu in 2021.

He plays for Kolkata Knight Riders in the famous Indian Premier League or IPL. He started as a pure swing bowler but later evolved his pace and his pace now can reach up to 130 kmph. 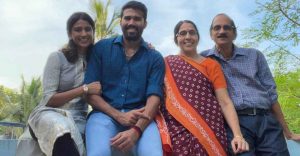 Sandeep Warrier began playing cricket during his school days. He played at lower levels for his school. His father used to work as a bank employee during his early years.

Warrier, like many other middle-class kids in India, pursued Engineering after School. But he soon dropped out, choosing to chase his dream of becoming a cricketer instead.

After many ups and downs in his cricketing career, Sandeep finally got a chance to play for the Indian Team and accomplish his dream in 2021 against Sri Lanka. 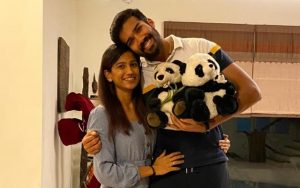 Sandeep Warrier got married to an International Skater, Arathy Kasturiraj in 2019. They got married after being in a relationship for a long time.

During Indian Premier League 2021, Sandeep Warrier along with his KKR teammate Varun Chakravarthy tested positive for the COVID-19 Virus. That day, His team Kolkata Knight Riders were to play Royal Challengers Bangalore. The match was postponed due to the news.

Sandeep Warrier, along with five other players was suspended for three matches in the 2018-19 Vijay Hazare Trophy. The reason for his suspension was revealed to be dissent with Sachin Baby, who was captain of the side.

Sandeep Warrier also has a hat-trick to his name which he took during the Syed Mushtaq Ali T20 trophy in 2019.

Sandeep’s ability to generate swing for his balls makes him a formidable bowler. He can also find extra bounce on the wicket if necessary. On his best days, Sandeep can prove to be any Batsman’s Nightmare.

He has over 100 First-Class wickets in nearly 40 matches. He was named to play for India Red in Duleep Trophy and India A in the Deodhar Trophy in the 2019-20 edition.

After being the strike bowler for Kerala for a long time, Sandeep moved on to Tamil Nadu at the Domestic level in 2021.

Warrier was added to the main squad for the last two T20I matches after a COVID-19 case. He made his T20I debut against Sri Lanka in 2021.

He was bought by Royal Challengers Bangalore in 2013 after impressing Captain Virat Kohli during a net session. But he didn’t get to play a single match during his stay at Bangalore.

Although RCB released him three years later, Sandeep had developed his skills a lot by then, working with Zaheer Khan and Praveen Kumar during his stay.

He didn’t get selected in the IPL for a long time then. It was in 2019 that he finally received an opportunity after an injury by Kolkata’s main pacer Kamlesh Nagarkoti.

By the turn of events, he ended up playing for Kolkata Knight Riders and took 3 wickets in the two matches he got to play in.

He was bought for 20 lakhs by Kolkata Knight Riders.