Fans all across the world are entertained and enthralled by the current Tokyo Olympics. However, organizing the Games will be difficult while the epidemic continues in a host city that is presently under a state of emergency and a country where 80 percent of citizens don’t want the Olympics to take place this summer, as per a recent survey. KreedOn brings you complete rules for Tokyo Olympics 2020.

Positive coronavirus instances have also hampered other big events in recent weeks, including the Eurovision song contest and the PGA Tour. Last season, many outbreaks in the NFL created huge difficulties.

The pandemic has already pushed the Tokyo 2020 Olympics back a year (though they will still be called Tokyo 2020). Before the tournament kicked off, organizers must pass two tests: preventing the transmission of COVID-19 from foreign tourists to Japanese citizens, and keeping athletes fit and virus-free so they can compete.

The task, though, is enormous. A total of 11,500 competitors are slated to compete in the Games in Japan, with an additional 79,000 journalists, officials, and staff anticipated to attend.

Here are some of the rules for Tokyo Olympics 2020 taken by the organizers to prevent the Games from becoming a disaster. Athletes who break the regulations, such as refusing to get tested for the virus, risk being prohibited from competing and having their credentials revoked.

Olympic Rules: Vaccines will be available for all

Olympic rules: Last month, the International Olympic Committee stated that Pfizer and BioNTech will donate coronavirus vaccine doses to athletes and country delegations before their departure to Japan, to promote a safer atmosphere at the Games and safeguard Japanese people from the virus.

“Nobody wants to put on games where there’s a higher danger of COVID-19 transmission,” he added.

A handbook called The Playbook lays out the regulations for Olympic rules for athletes competing in the Games.

Other groups, such as journalists, personnel, and foreign delegations, have their own set of rules. The most current editions of the guides were released in April, with the next and last editions due later this month.

It was recommended, but not necessary, to be vaccinated before coming to Japan. Vaccinated and unvaccinated athletes will be subject to the same rules.

The IOC had previously stated that it would purchase vaccinations from China for participants, but it later clarified that countries that had not authorized the Chinese vaccines, such as Japan, would not administer them.

Olympic rules: Outside of Japan, competitors must be tested for coronavirus twice, on different days, within 96 hours before flying to Japan. They’ll be tested once again when they arrive.

When they arrive in Japan, they will download an app that will track their position and be utilized for contact tracing, as well as activate the app and location services.

After arriving, athletes were forced to quarantine for three days. They will be allowed to participate in Games-related activities during this period if they test negative every day and agree to be monitored more closely by Tokyo 2020 staff.

Athletes will be allowed to monitor their temperature and any symptoms regularly using a smartphone app. They may also have their temperatures taken every time they enter an Olympic venue, and if the temperature rises beyond 99.5 degrees a second time after a cool-down period, they may be denied entrance.

Athletes will be checked for coronavirus frequently using a quick saliva antigen test. If the result is positive or ambiguous, the same saliva sample will be used for a slower but more reliable PCR test.

If the athlete is found to be infected with the virus, they will be placed in isolation, and contact tracing will be conducted. The athlete would not be immediately prohibited from competing, according to the playbook.

The fate of those identified as close contacts of a proven positive will be determined on a case-by-case basis. Although a negative test result will be necessary to compete.

Olympic rules: Athletes must keep a safe distance of two meters. Roughly six and a half feet from one another, except when on the playing field. In a blow to traditional sports gestures, physical contact such as hugs, handshakes, and high-fives are discouraged.

Athletes must eat alone or remain two meters away from others during mealtimes.

Athletes staying in the Olympic Village are required to eat there only. And at approved sites. Those staying abroad can only dine at the Games’ catering facilities. Or at their hotel’s restaurant, or in their rooms via room service or food delivery.

Olympic rules: Athletes are not permitted to act like tourists in Japan. They can’t do much of anything other than train and perform.

Athletes may only leave their accommodations to visit official Games sites and a restricted number of other areas. Details for the same are outlined in the Olympics playbook. They are required to wear masks nearly all of the time. Athletes are supposed to wear masks unless they are eating, drinking, sleeping, training, or competing.

Athletes must travel in special Olympic cars and may only utilize public transportation if it is their only choice.

Foreign media will be tracked by GPS 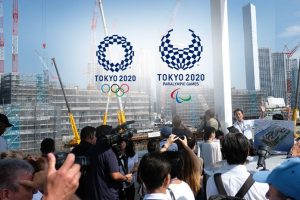 Olympic rules: According to The Japan News, Tokyo 2020 President Seiko Hashimoto said that international journalists would likely be tracked through GPS. It is done to ensure that they don’t go to places where they haven’t been allowed.

According to the news site, organizers have decreased the number of places where international journalists would be lodged from 350 to 150. They will be prohibited from sleeping with local friends or at other unregistered sites.

If foreign journalists visit areas where they haven’t reported in advance, their credentials may be revoked.

We are leaving no stone unturned for 2020 Olympics – Rajyavardhan...

Dipa Karmakar will not try the dangerous “Produnova” move at Asian...