Riyan Parag is a young Indian Right-handed batsman who can also ball useful leg-spins when required by his team. He plays for Rajasthan Royals in the Indian Premier League or IPL and represents Assam in the Domestic Circle.

He had already been part of a World Cup-winning team by the time he reached the age of 16. He has been an influential player in the U-19 World Cup and has contributed to India’s victory in the tournament. This is the life & style of India’s very young cricketing sensation – Riyan Parag. 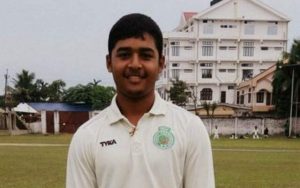 Riyan Parag’s father, Parag Das is a former Indian Cricketer. He played for Assam and Railways at the Domestic Level. His father also plays the responsibility of a coach or mentor to Riyan as he has quite some experience in terms of Cricket.

His Mother, Mithoo Barooah Das too hails from a Sports Background. She is a National Record Holder Swimmer.

Belonging to a Sports Background, he began playing cricket at a very early age. Riyan had been selected for the U-16 team as only a 12-year-old.

Riyan had said that he had weight issues at the beginning of his career, he, therefore, adopted a Ketogenic Diet for almost one and a half years, reducing his weight considerably.

The same year, a few months later, he was selected for the ACC U19 Asia Cup. Before that, in July against England in the Youth Test, Parag got the chance to make his Under 19 Debut. He displayed the immense talent he had in that match. Riyan scored a valuable half-centuries in both innings. He scored 68 in the first innings while got out on 50 in the second.

He made his ODI Under 19 Debut in a match against Bangladesh in November of the same year.

He eventually made his first-class and Ranji Debut in the 2017-18 Ranji Trophy Season against Hyderabad. He displayed his useful leg-spins, taking two wickets in the match.

He was named for the Under-19 Domestic team by the end of that year.

He ended up the highest run-scorer for Assam in the 2018-19 Vijay Hazare Trophy. In seven matches he had played, he had scored 248 runs.

Riyan Parag scored a 33 ball fifty in the Youth Test, the second-fastest fifty only after the modern day great Virat Kohli, who had completed his fifty in 32 balls, a ball less than Riyan Parag.

After the continuous display of the raw talent, he possessed, Parag was bought by the Rajasthan Royals in the 2019 player auction, where he had been contracted for his initial base price of 20 Lakhs.

The same year, he managed to score his first IPL fifty against a quality bowling lineup of Delhi Capitals in 2019. After the match, Riyan shared his experience as a ‘surreal’ one saying that he had been watching IPL for years now and could not believe that he was participating in one now.

His fifty made him the youngest Cricketer to hit an IPL fifty breaking the record of teammate Sanju Samson and Prithvi Shaw, both of them coincidentally playing that match.

While Prithvi Shaw and Sanju Samson had achieved that record at the age of 18 years and 169 days, Riyan Parag had done it almost a year younger, achieving the feat at the age of 17 years, 175 days.

Ever since Riyan Parag has been showing snippets of the great batsman he is to become and with cricketers like these as India’s possible future, one can be certain that India’s cricketing future is in the right hands.

He plays for Rajasthan Royals in the Indian Premier League at base price 20 Lakhs.

Spent just a few weeks with him, but had sooo much fun and learnt things i didn't know about me!
See ya soon @KumarSanga2 you're a LEGEND🙌🏻 pic.twitter.com/hKYS5POtv2

For the latest updates on Indian sports, stay tuned with KreedOn.