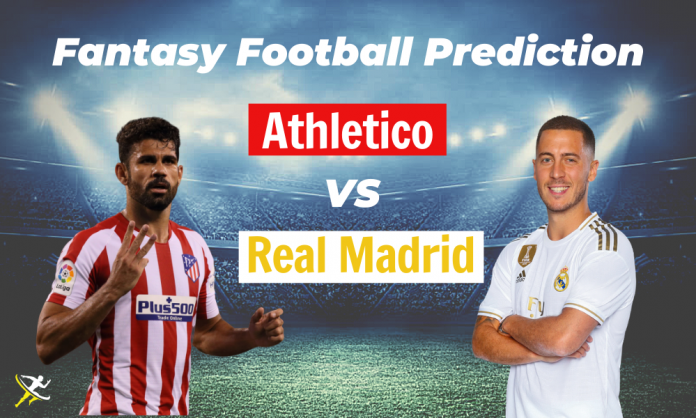 Real Madrid welcomes neighbours Atletico Madrid in the 22nd matchday of La Liga at the Santiago Bernabeu. Madrid are in top form, unbeaten in 12 games and on the top of the table. Contrastingly, Atletico Madrid have yet to hit top gears – they are 10 points behind Real; lost to Madrid on penalties in the Supercopa, before getting knocked out of the Spanish Cup by a Division 3 team.

However, ATM are unbeaten at the Bernabeu for six years now. They usually tend to be fired up for their clash against the city rivals. So will an out of form Atletico, who are winless in 2 games return to winning ways? Or Real Madrid, who have been quite superior this season extend their lead on the top of the table?

A big Madrid derby coming up on Saturday, when #RealMadrid will face #AtleticoMadrid

Let us have a look at the teams.

Real Madrid have turned the tables after last season’s disaster. They are on top of the table; unbeaten in 13 games and have the best defensive record this season. Their top scorers this season is Karim Benzema with 12 goals. In the last few games, goals have started to come up form other sources like Rafael Varane and Casemiro.

Tonight’s clash against ATM marks the start of a crucial month for the Los Merengues; in which they will also face Manchester City (UCL) and a potential title clash with FC Barcelona. Zinedine Zidane will want to start the month by making a huge statement with a victory tonight.

Diego Simeone’s Atletico Madrid have been off-colour this season. They sit 5th on the table, winning 9, drawing 9 and losing 3 games. The turn of the new year has not been any kinder to them. They lost to Real Madrid, in a final, again; lost to Eibar in La Liga, got knocked of the Spanish Cup and drew at home to Leganes in their last game.

However, ATM have a good record at the Santiago Bernabeu in recent years. A team which used to lose heavily here, have yet to be beaten at their city rivals home since 2013/14 season. And they will look at this stat to motivate themself and take home more than a point tonight.

The #DerbiMadrileno will present a face-off between 2 great GKs, Thibault #Courtois and Jan #Oblak who are presenting great stats this season. Which keeper will get the upper hand? #Real #Atletico #Madrid #RealMadrid #AtleticoMadrid #LosBlancos #LosColchoneros #RealMadridAtleti pic.twitter.com/TmVvIyXj2z

The quick, hard-tackling Raphael Varane picks himself with his skipper and teammate Sergio Ramos, who is a much-needed presence in the backline given his experience in this fixture. Varane has learnt a thing from Ramos, who has a knack of scoring goals in high-profile games. The Frenchman has 2 goals this season, while his captain has 3.

The ever-reliant right-back Dani Carvajal joins Ramos and Varane. Carvajal is always ready to attack while also tracking back and attend defensive duties. He is joined by Jose Maria Gimenez from Atletico. A solid and young centre back Gimenez ranks among top passers of the ball with 460 passes.

Toni Kroos gets the nod courtesy because he boasts of his accuracy. The German has completed over 1200 passes this season and has 2 goals with 4 assists to his name. Luka Modric is another excellent choice considering his vast experience in the contest. He has three goals and four assists this season. However, it is important to know Modric has started very few games this season.

You can also go forward with Casemiro as well, considering his crucial tackling and intercepting abilities. Moreover, Casemiro has 3 goals and an assist this season. The Brasilian will be vital in set-piece situations. He also scored an overhead goal versus in the same fixture last season.

From Atletico Madrid, we have Saul Niguez and Thomas Partley in midfield. Both of them are ATMs top passers with over 700 completed passes this season. While Saul has 2 goals this season, defensive midfielder Partley has netted one time.

Karim Benzema is Real Madrid’s top scorer with 12 goals, and top assister with 5 assists. Joining him to make a 2-man attacking option is former Real player Alvaro Morata. The Spanish striker has scored 7 goals this season. He remains Atletico’s best forward in the absence of Diego Costa and Joao Felix. Angel Correa can also be selected instead of Morata. The Argentian has 3 goals and 5 assists this season.

Manan Dharamshi
I usually describe myself with three 'F's, i.e, Food, Football and Films. Born and Brought up in Bangalore since the mid-1990s, I have always had a huge interest in playing football, cricket and watching other sports. People who know me always tell I bleed football. Sports, and Football, in particular, has helped me through hard times and helped me to shape my view on the world. And that is one of the reasons why I want to serve as a Sports Journalist.
Previous articleCFC vs KBFC Dream11 Prediction 2020 | Chennaiyin FC vs Kerala Blasters FC
Next articleFans react to Zakir Khan’s insane take on Super Over