Hall for the Wall: Rahul Dravid Becomes the Fifth Indian to Make It in the ICC’s Hall of Fame 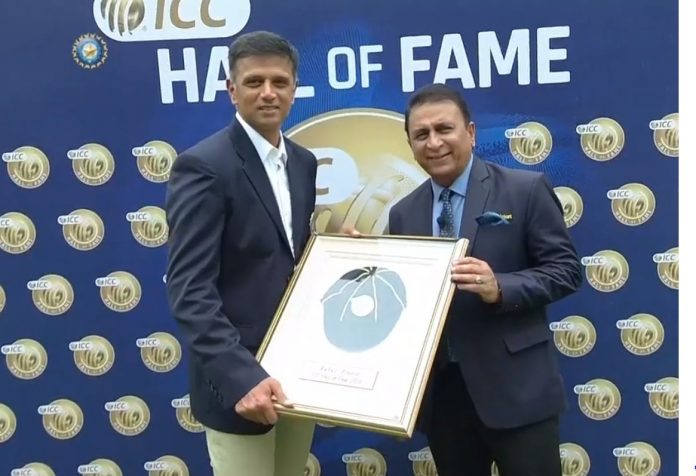 India’s legendary batsman and former captain Rahul Dravid is now formally a part of the International Cricket Council’s Hall of Fame. Much deserving Dravid has now become only the fifth Indian to find a place in the elite. The other four distinguished personalities are Bishan Singh Bedi (2009), Sunil Gavaskar (2009), Kapil Dev (2010), and Anil Kumble (2015) .

To make the event more special for “The Wall”, as he is fondly known, it was none other than Sunil Gavaskar who was present at the Greenfield International Stadium to hand Dravid the plaque. 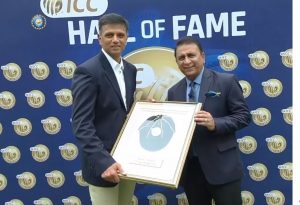 The ICC had earlier declared that Australian legendary former captain and batsman Ricky Ponting and Rahul Dravid would be inducted in Hall of Fame in July.

Some of THE WALL’s world-records

The Bangalore-based batting genius, during his prime years, had been bowlers nightmare. He was known especially for his defending abilities which even the best would find difficult to penetrate through, thus earning him the sobriquet of “The Wall”.

In fact, he has the world record of having faced the most number of balls to his name, a stunning 31,258 deliveries.

Dravid also has the record of spending more time on crease than any other batsman in the world.

He is also known for his excellent fielding and has the most number of catches in the world (by a non-wicketkeeper) with 210 scalps in 164 matches of the oldest format of the game.

He amassed 13,288 runs from 164 test matches, third highest amongst fellow test players and only behind Tendulkar and Jacques Kallis.

On receiving the esteemed induction, Rahul Dravid said that it was a matter of great honour to be named by the ICC in the Cricket Hall of Fame.

“To find your name in a list of all-time greats across generations is something one only dreams of while setting out on a cricket career and the kind of recognition that would delight any player,” he also added.

Twitterati was saturated with congratulatory posts pouring in for the batting maestro on his latest feat.

Rahul Dravid officially inducted into ICC Hall Of Fame. What took so long?

Fifth Indian to be inducted into ICC #HallOfFame, what a proud moment for the country! Congratulations Rahul Bhai. May you keep climbing the ladder of success! #RahulDravid #ICC @ICC https://t.co/MAMqRvZ82D

Rahul Dravid becomes the 5th Indian to be inducted in the @ICC Hall of Fame. Congratulations to the legend on joining a list of all-time greats across generations. pic.twitter.com/RAyQ8KrtWR

Congratulations to The Wall, Rahul Dravid. You deserve it!

Monish Gadiya
Monish Gadiya is the Head of Content at KreedOn. He is a thorough tech-enthusiast and believes that innovation is the answer to all the problems prevalent in the society. Monish graduated from University of Pune with a degree in Civil Engineering before pursuing a post-graduate diploma course in intellectual property rights. A die-hard football fan, he has represented his college at various football competitions.
Previous articleParupalli Kashyap Biography: A Classic Example of Why Simplicity & Will Power Can Never Go Out of Style
Next articleDeepti Sharma Biography: Story of India’s Rising All-Rounder Wizard

Top 10 Players With Most Test Centuries In Cricket | Complete List

Harsha Bhogle Biography | Know The Story of Voice of Indian...

India vs Pakistan in World Cup: A look at biggest rivalry...