It was a difficult task ahead of PV Sindhu but she had a great run. 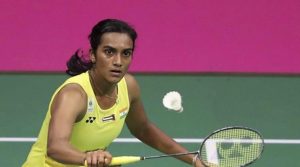 India’s celebrity shuttler PV Sindhu seeded second, endured a 15-21, 18-21 defeat to top seeded Nozomi Okuhara of Japan in straight games within 50 minutes to settle for runners-up place from the Thailand Open in the Nimibutr Stadium at Bangkok on Sunday, 15th July, 2018.

The Olympic silver medallist Sindhu got defeated in the first game in 20 minutes as the World No.3, Sindhu, left a lot of unforced errors. And, she came back again swiftly but fell prey to Okuhara’s aggression with more unforced errors. The Japanese came back on two events to take the game apart in the reach of Sindhu.

Okuhara has a 6-5 head-to-head win-loss over Sindhu. Earlier when the duo met in the All England Championships before this season, it was the Indian who defeated her. It had been Sindhu’s third chance at a final this season after her defeats in the summit battle of India Open and Gold Coast Commonwealth Games.

Sindhu who had a foot strain before the CWG and overlooked the Uber Cup final attained semifinal and quarterfinal in her past two championships — at Malaysia and Indonesia — earlier than this. Earlier in the Thailand open, Sindhu got better off Gregoria Mariska Tunjung to reserve a final berth against reigning world champion Okuhara of Japan.

Saina vs PV Sindhu at Commonwealth

This is an incredible and unprecedented stage for Indian badminton. 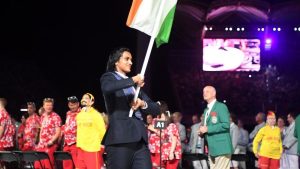 Two Indian women pitted against each other at the Commonwealth Games, Saina Nehwal eked her third successive victory over Sindhu in six months, including the National Championships held in November 2017 along with the quarterfinal victory at Indonesia Pros in January.

This was a huge win for its two-time CWG winner, who exhibited pure grit, aggression and finesse to complete off Sindhu’s struggle in straight games and take home the women’s singles gold, eight years after her triumph in New Delhi.

It was also a decisive psychological battle for her. Although she’s had much larger victories previously, Saina Nehwal rated it the best besides the Olympic bronze she won in London 2012. And that’s due to the pressure of enjoying her compatriot Sindhu.

Whether Saina enjoys it or not, since the 2016 Rio Olympics, Sindhu has been the poster girl of Indian badminton taking away the spotlight from Saina. She’s emerged as not just the most notable celebrity in Indian badminton but also across areas — an example being that she had been the flag bearer for India in the CWG opening. In the Games also, Sindhu was seeded No.1 while Saina had been No.2.

Therefore, the strain of winning from the 22-year-old Sindhu at one of the highest phases was a challenge for Saina, who confessed that winning the 2018 gold was more laborious than 2010.

“It was much tougher (than 2010) because the pressure is always there when you already have a gold. It’s a very emotional moment because I’ve been waiting for one good, big victory after that disappointing loss at Rio where I had to retire because of my injury,” Saina said following her success.

“It’s a healthy rivalry, people enjoy it. No doubt we are under tremendous pressure .”

Saina’s performance was on a steady increase ever since her return after the operation.

Sindhu, chief national trainer Pullela Gopichand and her service team possibly will need to work more on her psychological strength since she has got the match now.

Though it was commendable of PV Sindhu to come back from injury and perform like this.

It is routine for top badminton players of the nation to undergo training two times each day in the SAI-Gopichand Academy, under the watchful eyes of their chief national trainer. Before the commonwealth games, It was observed PV Sindhu’s injury wasn’t severe.
“We were playing in the morning when she tripped and fell. But I only came to know about the injury in the evening ” Praneeth said.

Once contacted, Gopichand didn’t seem worried. Asked whether she is likely to go for Gold Coast Commonwealth Games beginning on April 4, the veteran mentor responded in the affirmative. Sindhu’s dad, PV Ramana, who follows her daughter to each of the coaching sessions, stated it was a slight accident. “She was undergoing her regular practice session when she sprained her right ankle, but there is nothing to worry. To be 100 percent sure, an MRI scan was also done. There is no serious injury” Ramana educated. Doctors had suggested that the 22-year-old Olympic silver-medallist won’t be sitting idle. “She will continue to do most of the things she does at the academy, such as shuttle conditioning and on-field training. The only part she will skip is running. Most probably, she will be back to her full schedule on March 29,” Ramana added.

Though the Games officially started on April 4, badminton singles events did not commence before April 10. That gave her time for the commonwealth, and you know what happened later.

We wish PV Sindhu all the luck for the Asian Games and future World Championships.

Keep reading and sharing the stories of Indian athletes. To get it in your inbox, please subscribe to our newsletter.

KreedOn Network
We are a team of sports writers who research about sports in India day in day out. Please reach out to us in case of any specific requirement of digital services on [email protected] .
Previous article
5 Emotional Moments for India at Olympics
Next article
Chess Grandmaster Sahaj Grover retains South Africa Open 2018 title

K Srikkanth: In Next T20 World Cup, Hardik Pandya should be the captain of Indian Team | KreedOn Banter

K Srikkanth: In Next T20 World Cup, Hardik Pandya should be...

PV Sindhu Just 1 Step Away From Historic Feat in BWF...