That’s all it took to completely change a thousand lives for the better.

That’s what it took to start a billion conversations, generate millions of dollars, and completely revolutionize Indian sports. 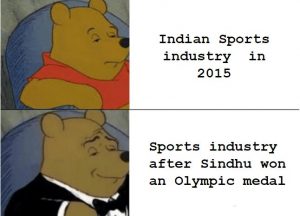 When PV Sindhu won that Olympic silver medal, my life as a national badminton player changed completely. And four years later, that Medal continues revolutionizing the entire sporting industry. In this article, I will talk about the most basic changes that occurred in the Indian sporting industry as a result of this.

When I walked into my house, my IIT and IIM graduate father told me that I have his full support if I wanted to pursue badminton as a career. Coming from a person who wouldn’t be satisfied even if I got 98% marks, this was a huge deal!!

“At least a hundred new students enrolled. We got a dozen more coaches. The number of academies in my city increased from two in 2015 to thirty in 2019.”

In my coaching academy, it was a completely new situation. Everyone began training with a new level of energy and motivation. Our drive was unparalleled. At least a hundred new students enrolled. We got a dozen more coaches. The number of academies in my city increased from two in 2015 to thirty in 2019. The number of tournaments hosted changed from one per year to at least fifty a year. I was given a sponsorship by a reputed sports company. I got more respect as a badminton player. And in an endeavor to become like PV Sindhu, so many more people started joining sports. Trust me when I say that the sports ka keeda spread faster than even corona virus! And it was like the domino effect. One small change caused another, which ultimately led to a million larger changes, to transform the sports sector in India.

PV Sindhu in Badminton |  Changed the outlook towards sports

At a macro level, that one medal caused the following changes:

Sindhu’s victory sent a message to the entire country, loud and clear: there is a future for India in sports. Sindhu’s name appeared everywhere: news channels, advertisements, award shows, and meme pages, you name it. And thus, the story of her hard work and capability was revealed bit by bit. Now her story represented the lives of thousands of athletes of India. Parents started to look at sports as a viable career option, rather than a waste of time. Children started dreaming of becoming not only like Elon Musk and Indira Nooyi, but also like PV Sindhu and Mary Kom. Schools focused not only on physics, chemistry and math, but also on football, basketball and badminton. People began to realize the importance and viability of sports. And this change in perspective was as beneficial for the sporting industry, as Elon Musk was for Kanye West!

“The more conversations there were, the more people began having a positive outlook towards sports.”

The benefits of this were unparalleled and worked in a cycle. The more conversations there were, the more people began having a positive outlook towards sports. They began viewing it as an activity that benefited one’s body and personality. It was viewed as not only a productive extracurricular, but also a career option with a decent success rate. That in turn caused parents to be more motivated to send their children to training classes. Out of the 8 national level players I interviewed 7 of them said that the reason they joined sports fifteen years back was because they came from a “sports family”. This means that their parents were athletes or coaches. 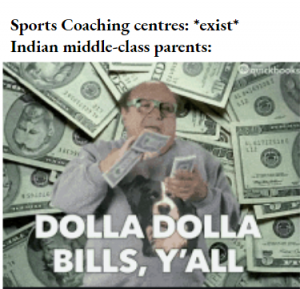 Today, in 2020, engineers, lawyers, doctors – everyone is sending their kids to sports academies. And this was the best thing that could happen to stakeholders in sports. Think of it this way: the demand curve in the sporting industry shifted right. This caused not only a higher price and profit level, but also a reason for using all those untapped resources. 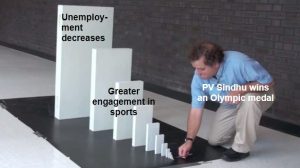 This translated into a higher demand for physical capital such as sports equipment, long- term infrastructure facilities, and nutritional food products. You may guess what this resulted in- more employment in all areas. From aluminum miners, bird domesticators (for badminton shuttlecocks), farmers and low wage laborers to entrepreneurs and nutritionists, everyone benefited. Apart from this, there was also a higher rate of production and urbanization in small towns. This automatically translated into a great deal of economic development.

And then come the human factors. Players who could not make it to the top 10 now became high paid coaches. Sports management opened up as a whole new field Sports nutritionists, psychologists, advisors, doctors, data analysts and specialists started becoming very attractive professions. People started joining sports universities, and research, education. Even sports law became big! In fact, my coach was a Software Engineer at a renown MNC, who quit his job to become a coach! New infrastructure was built, employment was generated, goods were produced; economic development came about like never before.

It was like the Sports Renaissance of India, and I couldn’t say I’m happier. Back in 2016, I had so many questions, so many doubts about this sporting transformation. I used to wonder what was it that caused such a drastic change in 2016. And 3 years later, I think my economics and sports obsessed mind has somewhat of an answer. In fact, that is something I will tackle in my next article.

Until then I leave you with this statement:

It only took 500 grams of metal to produce five hundred million pounds more. It only took one Sindhu to create a thousand more in the future of India. It only took an object worth five hundred dollars to generate fifty million dollars more. And now tell me that the sports industry isn’t important.

Adya Bhargavahttps://www.batonofhope.org/
Adya is a 17-year-old student at The Shri Ram School and former India Rank 19 in badminton. She is passionate about the academic aspects of sports and writes about the interdisciplinary relationship between sports and economics. She also has her own organization, Baton of Hope, to help underprivileged athletes pursue sports at the grassroots levels.
Previous articleTop 12 Best Squash Rackets in the Indian Market | Learn How to Choose the Best Squash Rackets for the Top Notch Performance
Next articleTHE RENAISSANCE OF INDIAN SPORTS