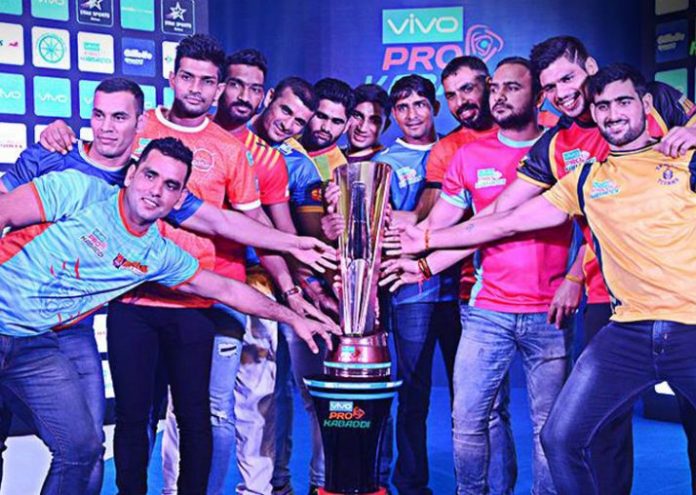 The much-awaited sixth season of pro kabaddi league to about to take off and everybody has their fav pro kabaddi teams to cheer for. Fans are hopeful for a lot of thrilling matches and nail-biting finishes this year. However, the auctions that happened in Mumbai are sure to be considered before picking your fav team this time.

Here’s a look at all the 12 pro kabaddi teams playing in this season league.

The pro kabaddi team based in Kolkata has yet to show the spark their fans are waiting for. Last year was quite a step up for the warriors as they finished 3rd in the season. This season the team is led by Surjeet Singh and have retained their core players during the auctions held in Mumbai. They have bought two foreign players: Jang Kun Lee and Ziaur Rehman.

The closest that the Bulls have been to the trophy was in season 2 where they finished up as runners-up losing the match to U Mumba. However, they have brought a couple of changes in the team expected to make a strong comeback this season.

The team is led by Rohit Kumar who is amongst the retained players in the team. Rohit seems to be in great form for this season and might take his team to a decent position in the points table by the end of the season.

We hope to see this team surprise us all this time with better performances as a team. It hasn’t been a great journey for them since the beginning of the pro kabaddi league. Their best till now have been 6th in the ranking table which can definitely be improved.

Captain Meraj Sheykh who has been playing exceedingly well in the past seasons but has failed to take his team to the later rounds as the team as a whole has been a disappointment. This season, however, after the auctions it seems like we can prepare ourselves to see this team flourish and give us a good show.

The team that’s comparatively new and made its debut last year is ready to take it to finals once again. After reaching the finals of the pro kabaddi League last year too but ultimately losing the title to Patna. Nevertheless, they had an excellent run throughout the season last year. Gujarat has lost it’s two gems: Fazel atrachali and Abozar Mighani in this year’s auctions. Their coach, Manpreet Singh is confident and hopeful for putting up a good season with some new players.

In an interview with sportsalive, he said

“We set an example for the other teams by winning all our matches at home, setting a record of not losing a single game. Our fans coming to watch show affection for our performances, [which is] a boost for the players,”

The captain of GFG, Sunil Kumar is just 21-years-old, also amongst the youngest players of the league.

Steelers made their debut in the Pro Kabaddi league last year and managed to reach the playoffs. However, they finished 3rd last season but have become the talk of the town after buying Monu Goyat for a whopping amount of Rs 15.1 million in the auctions. Haryana retained their Captain Surender Nada who was the top scoring defender with 80 tackle points.

Panthers have truly started over. Not retaining a single player from their old team. One of their important buys is for sure Anup Kumar who was the captain of U Mumba from the very beginning of the league. Other than that, Jaipur Pink Panthers have had a roller coaster ride throughout these 5 seasons. Starting with winning the first season to going down to 5th-6th rank in the later seasons. They finally came back in season 5 last year where they reached the playoffs.

Patna Pirates have truly been the pirates amongst all the pro kabaddi teams. They dominated the league with a hat-trick where they won 3 seasons consecutively.

In this year’s auctions, they have retained 4 players: Manish Kumar, Jawahar Dagar, Jaideep, and Pardeep Narwal. Monu Goyat who was bought by Haryana Steelers this time was also a crucial part of the Pirates but they had to let him go.

With the core team, the Pirates are still going strong on planning to win their 4th consecutive win this season.

This Paltan has had impressive past seasons with qualifying for the playoffs three times consistently. Girish Ernak will be the captain of the Paltan in this season. He has been in the team since last season. Rajesh Mondal and Nitin Tomar(raiders) are strong players whom we can expect to take the team ahead strongly. They also have a bunch of experienced players which definitely adds up to the success probability.

Last season wasn’t great for the Thalaivas but this season they are all prepared to have a great season ahead. Ajay Kumar will be leading the team as the captain. Sukesh Hedge, Athul MS and Jasvir Singh are among some of the raiders in the team.

“We have a balanced squad for the forthcoming season. If we can get some wins under our belt early, it will help us inch closer to the Super Playoffs,” Bhaskaran said at an event to launch the team jersey here.

The players were optimistic about winning all the home matches, he said.

The Titans started off low with 5th position in the first season but eventually took off reaching the playoffs in season 3. They are still waiting for winning the trophy and are confident for this season. Vishal Bhardwaj has been recently announced as the captain of the Titans and is one young talented lad.

UP Yoddha didn’t have a very impressive debut as they finished 5th in season 5 where they started. They successfully retained their defender Jeeva Kumar who has been an ace of the Yoddha pack and Nitesh Kumar( Defender).

There are in total 4 all-rounders in their pro kabaddi team: Akram Shaikh, Narendra, Seong Ryeol Kim, and Sagar Krishna. Let’s see how these Yoddhas perform this season.

Winners of Season 2 after beating Bengaluru bulls in the finals. U Mumba is one strong team to beat. They bought Iranian player Fazel Atrachali for Rs 10 million in this season’s auction. Needless to say, he has shown his best in every season he played. He will be an important part of the team’s future performances as he is now leading the team as a captain.

For more updates on Pro Kabaddi league, subscribe to our newsletter.

Amrita pandey
Amrita is a content writer/editor and social media manager at KreedOn. Amrita looks after the content creation and marketing of the website. Her love for sports made her join this organization where her intention is to help every athlete get the recognition they deserve through her profession. Amrita started writing when only sketching cartoons at the back of her notebook seemed a little too vague for a school pass out.
Previous articleYouth Olympic Games 2018: All You Need To Know About YOG
Next articleIs Kerala Blasters the most popular ISL team? We find out

Here’s All You Need to Know About Historic PKL All Stars...