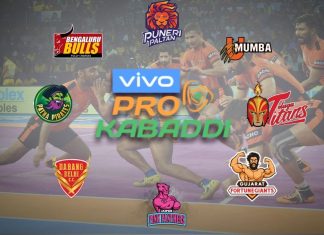 he 7th season of the Pro Kabaddi League is in full swing with first two legs already done and dusted. But this is going to be a long season with all twelve teams playing each other twice in the double round-robin format. The top 6 teams will qualify for the playoffs where top two will get a direct ticket to the semi-final and 3rd, 4th, 5th and 6th placed teams will play eliminators for the place in the semi-finals. So based on the current performances and quality squads, here are the six teams which are likely to make it to the Pro Kabaddi playoffs this season:

With three wins and two defeats in their five games, Bengal Warriors are sixth in the table with 17 points. But it is their scored difference of 50, most by any team in the seventh season so far, which is a worrying sign for Bengal’s opponents. The Warriors have won their games 48-17 and 43-23 while losing by just one and two-point difference. All-rounder Mohammad Esmaeil Nabibakhsh has been an excellent signing for the Warriors, earning 28 points in 4 games. Maninder Singh has been team’s best raider with 45 points and will look to keep the same form in the long and testing tournament.

The defending champions are looking to repeat last season’s heroics with the previous season’s superstar – Pawan Kumar Sehrawat. The raider is already ahead of his opponents with 74 raid points in just four games. Apart from their 24-42 defeat against mighty Fortunegiants, the Bulls have won the rest of the three games. And considering their three wins were against quality sides like Patna, Mumbai and Bengal, Bengaluru Bulls’ title challenge is just as dangerous as the last season.

But Pawan Kumar will need a little more support from the rest of the squad. In Bengaluru’s game against Bengal, Pawan won 29 points in total while the team’s second-best player was Saurabh Nandal with just 6 points. The over-dependency on the raider might come back to haunt the Bulls in the next few weeks. The likes of Rohit Kumar and Amit Sheoran need to contribute more to the team’s cause.

After two consecutive defeats in finals, Gujarat Fortunegiants are hell-bent on getting their hands on the trophy this season. And their hunger for success is visible from the kind of results they are delivering. Gujarat has won 42-24 against the Bulls, thrashed UP 44-19 and even defeated the table toppers Dabang Delhi. And it has been an all-round team performance by the Giants. Rohit Gulia has won 30 points, More GB 28 and Sachin Tanwar has grabbed 26 points. Parvesh Bhainswal has been instrumental in defence with 13 tackle points.

But the Giants have also received a wakeup call from both Mumbai and Puneri Paltan. They lost 31-33 to Pune but were crushed 20-32 by U Mumba. The team needs to be careful to avoid such things as one lousy result can change the points table in the long and gruelling league.

Tamil Thalaivas strengthened their squad in the 2019 auction with the signing of the most valuable player in the PKL history, Rahul Chaudhari. The Showman joined Ajay Thakur and Manjeet Chillar in the already star-studded squad. And the Thalaivas have risen from the seventh position to the Third spot. The team lost both their games by just one point margin against Dabang Delhi and Patna Pirates. But made a comeback with a stunning victory over hosts Gujarat Fortune Giants. Ajay Thakur, for once, played like Ajay Thakur as the South Indian team won by 28-34. There is still a long way to go in the tournament, and the Thalaivas can make it to the playoffs with raider Rahul Chaudhari and defender Manjeet Chillar leading the way.

The inaugural champions finally seem to be on the right path once again with four wins in five games. After all, they are in dire need of a good season after two consecutive group stage finishes. Captain Deepak Niwas Hooda has led the team from the front with 41 raid points in five games, third-best in the league so far. But it is the left corner defender Sandeep Kumar Dhull who has led Jaipur’s defence. The 23-year old is the league’s best defender so far, with 23 tackle points. Amit Hooda is not too far behind with 16 tackle points. This looks like Jaipur’s year for yet another play-off and maybe even final.

Look at how the tables have turned! The Capital city team managed to make it to the playoffs for the first time in their history last season, and they are already leading the table this time around. Delhhasve won 4 out of five games and are currently at the top of the points table with 21 points. After two consecutive wins by just a point difference, Delhi got going stronger with a 41-21 victory against Haryana Steelers. Naveen Kumar has led team’s attack with 53 points in five games, second-best in the league. Dabang Delhi now has a real shot at making it to two playoffs in two consecutive seasons. And the team might try to fight beyond that, trying to make it to the final for the first time.

U Mumba has won three and lost four in their seven games so far. So if you look at it, they haven’t set the stage on fire. But the way they have won those three games tells you what U Mumba can do when they are playing at their best. Fazel Atrachali and Surinder Singh have led Mumbai’s defence while Abhishek Singh has successfully replaced Siddharth Desai as the team’s lead raider with 35 points in six games. But Mumbai’s three defeats, which came against Jaipur, Bulls and UP, will be a worrying sign for the team. The Mumbai attack will have to step up if they wish to make it to the first final since the third season.

Share
Facebook
Twitter
WhatsApp
Linkedin
Previous articleBCCI Comes Under NADA; This is what will happen next…
Next article3 players to look out for from Gujarat Fortunegiants