Iran’s Fazel Atrachali became the first player in the history of Pro Kabaddi League to enter the one crore club after he was bought by U Mumba at a record-breaking price in the auctions.

Atrachali went into the auction at a base price of Rs. 20 Lakhs, but later was fetched by U Mumba at a five times more price. 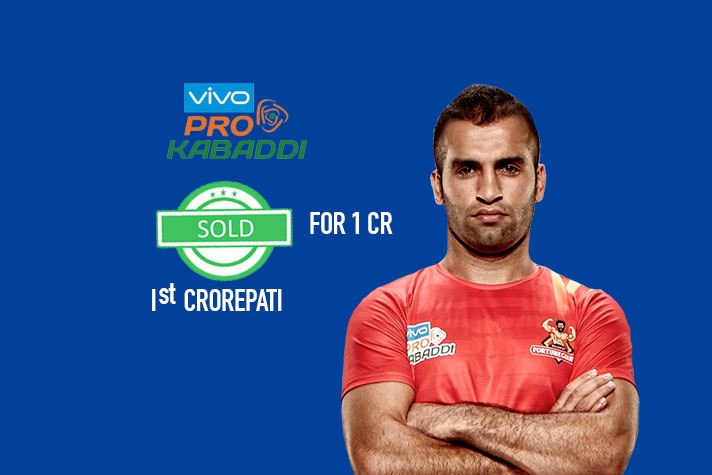 Atrachali said, “I am very happy to be back in my second home – U Mumba. I have immense respect for the U- Mumba team because it is where it all began for me. The fact that I beat the record for the highest bid in VIVO Pro Kabaddi is truly an incredible feeling.”

Meanwhile, U Mumba team owner, Ronnie Screwvala said, “We wanted to be strong in defence. We had an extremely strong defence in season 1 and season 2 and that was part of the reason why we bargained for Fazal so fiercely. Fazal is someone who has played with us and we are quite happy to have him back. We wanted to be sure that we got who we wanted rather than going right until the end and then have to hastily pick a player. You need a minimum of two international players, instead, we picked 3. We are happy to have the ex-Iranian coach, Mr Golan Raza as our coach and his insight helps us to cherry-pick international talent right in the beginning.”

The Defender Ziaur Rahman was the third highest bid player in the auctions going to Bengal Warriors for Rs. 33.25 Lakhs.

The player auction for the sixth season of the Pro Kabaddi League took place started on May 30 and ended on May 31 in Mumbai and witnessed some strong strategizing from the franchisee owners.

The two-day auction marked the first event for Season VI, with the franchises coming together to build their teams. Out of the 12 franchises, nine have chosen their Elite Retained Players and the remaining three will construct their teams from scratch.

KreedOn Network
We are a team of sports writers who research about sports in India day in day out. Please reach out to us in case of any specific requirement of digital services on [email protected] .
Previous article
Is the future of Sanjita Chanu Uncertain – Doping haunts Indian Weightlifter!
Next article
Confident of a Good Show at the Jakarta Asian Games – Sushil Kumar

Analyzing Patna Pirates Team & Its Performances over the years |...