Pramod Bhagat – A young boy from Odisha finds himself polio-stricken. His father, who is working in rice mills, rushes him to the doctor. The doctor asks him whether to drive the effect of polio towards the boy’s hands or legs. It’s an awkward question, but then, the father hardly has any other options. He unwillingly choses the poor child’s hand. The polio quitely obliges with the decision and spares his hands. However, the boy’s left leg is deemed ineffective.

But just when you thought that the young boy’s destiny is doomed forever, think again. The boy picks himself up, turns his misfortune into strengths, and trains himself to become one of the finest players the country has ever seen. This is the inspirational story of Pramod Bhagat, the world’s No. 1 para-shuttler at the moment.

A three-time world champion, Bhagat is also one of the rare shuttlers who can play equally well in both the singles as well as the doubles format of the sport. Moreover, he has been tagged as a medal prospect for the 2020 Paralympics and is one of the most talented para-badminton players in the world now. He has top-scored the world ranking in the SL3 category. Let’s dig deeper into Pramod Bhagat’s inspirational story: 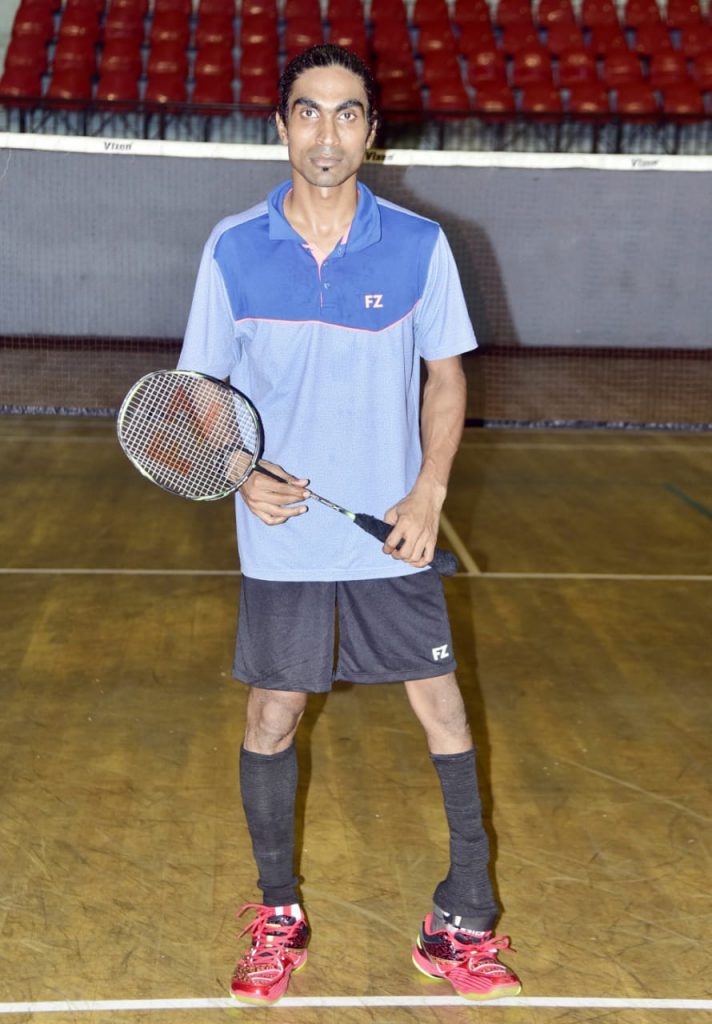 Pramod was fond of badminton from an early age. He would watch his neighbors playing badminton during the day, deeply inspiring him to take up the sport.

He found the sport quite captivating and decided to give it a try. And slowly, as he took up playing badminton, the interest turned into a full-fledged passion.

Even after Pramod was diagnosed with Polio, his love for badminton never waned down. It only got intense. Keeping his hope of playing the sport alive he took his adversity as a challenge. He would practice dedicatedly for hours, most often against senior players. The aspiring shuttler would determinedly wait outside the court for his turn to arrive outside.

Initially, he played with able-bodied players at the district level and even won a district-level competition. Then the shuttler moved towards para-badminton.

From there, Pramod has never looked back, ‘smashing’ many records and winning multiple laurels. In fact, his list of achievements knows no bounds virtually.

In the month of March this year, the para shuttler won in the fifth Turkish Para-Badminton International- ENES CUP 2019 at Antalya in Turkey. The ace had also won two bronze medals in the last edition of the same tournament in 2018. In April, he bagged two gold and one silver medal at the IWAS World Games in Sharjah.

In an interview with one of the sports websites when he was asked about his training he said, “Focus on the game with all your strength and practice. This is the prime thing every player should concern about. They all toil hard for their dreams but what matters the most is to focus on whatever you are doing and give all your true efforts for that particular thing. The second thing is the presence of the mind to act according to the situation. Only hard work is not the key but smart work as well.”

In the same interview when asked about balancing personal life and badminton, the shuttler expressed,”It is difficult as a player as I am often on tours to perform at various sports stages around the world. I hardly get time to spend with my family but I am lucky enough to have such a family that understands my vision and supports my goals of life in spite of not being so aware of the world of sports and the environment where my family lives, being a rural area. People play just for hobby and entertainment.”

Pramod is among the 5 para-badminton players to have been shortlisted by the Mission Olympic Cell of Sports Authority of India for Target Olympic Podium Scheme (TOPS) in preparation of Tokyo 2020- Paralympic Games.

People Behind the Scenes

Starting as one of the finest para-shuttlers of our country, Pramod has bagged numerous accolades in badminton including the World Championships and Asian Para Games. But behind his long list of medals and awards, there has been an important contribution from Pramod’s parents – the late Kailash Bhagat and Kusum Devi. It was their undying faith and encouragement in Pramod’s life that made him the player he is today.

SP Das and Gaurav Khanna, his coaches, should also be credited for their massive role in developing Bhagat’s career. They were instrumental in polishing his potential in the sport and in encouraging him for towards his dreams.

READ | Meet the Top 15 Indian Para Athletes who made the Nation proud!

Meet World No. 1 Para-Shuttler @PramodBhagat83 who has 4 BWF World Championships titles under his name. With hard work & determination, he is now ready to win a medal for 🇮🇳 at @Tokyo2020 #Paralympics

PCI is proud to share that @sportshonours recognised @PramodBhagat83 as 'Differently Abled Sportsman Of The Year 2020' based on his achievements in the year 2019!Keeping up his commendable performance, Pramod will also represent India at #Tokyo2020 @paralympics!🎉🎉 #Praise4Para pic.twitter.com/8UHcP23k1E

The words, the tales, and the tussles of the athletes like Pramod Bhagat will resonate through the soul of inspiration. It gives power to humanity to confront the many struggles that life bestows upon them.

We, therefore, wish Pramod Bhagat all the very best for his upcoming endeavors.

Akshay Badwe
The God taught me to love everybody but the most ones I learned to love are the athletes. Desire, determination and discipline takes me to a great deal of love towards sports. One can call me an avid sport maniac because I love to pen down some glorious content on sports. Being from journalism background with experience in media from couple of years I would like to keep this legacy going and now joining Kreedon gives me one more platform to explore the new world. I am always up to have a word on sports with a coffee.
Previous articleIPL 2019: CSK vs MI Final Dream11 Prediction | Preview
Next articleThe Ultimate Guide to Food Supplements for Athletes

G Sathiyan Biography: The Tale of an Engineer Who Made it Big in Table Tennis

Ambati Rayudu Cricket Profile – The story of ‘patience’ and ‘class’

G Sathiyan Biography: The Tale of an Engineer Who Made it...