From gloves to disinfectants, from fighting in the ring to fighting for a square meal, the plight of an Indian Boxer Krishna Routh worsens day by day.

The man, who once wore boxing gloves in the ring, and took his opponents to the cleaners, now holds a broom every day and cleans the city. There was a time when the man had thousands of people cheering for him, and the euphoria helped him knock out his opponents. But today, the man only has hundreds of dirty drains around him and no one to help him look after it. The strong arms that once threw deadly punches in the ring now spray disinfectants in Howrah. This is the story of an Indian Boxer. This is 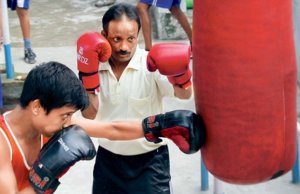 the story of the 45-year old West Bengal boxing champion Krishna Routh, who today is a temporary sweeper in the Howrah Municipal Corporation.

Krishna Routh, who was only 15 years old at the time, won the Gold Medal in the All India Invitation Boxing Championship (the Surya Sen Trophy) in 1987 and the runner-up trophy in 1992. In 1987 he also won the Lalchand Roy Memorial Boxing Championships and in 1990 the West Bengal State Championships. In 2007, the Indian Amateur Boxing Federation certified him as a coach.

He sure loved cricket and football, but his passion and obsession for boxing consumed every minute of his life. Due to his rigorous training regime, his studies suffered a major setback and compelled him to drop out of the school in 5th standard. While dropping out, never in his wildest dreams would he have envisioned that his medals and certificates would become obsolete one day and would become the very reason for him not being able to get a job. He thought that boxing would help him get a job in the army. However, the lack of height and proper education turned out to be his biggest enemies. The champion, now, sprays disinfectants in open drains and lives in a one-room house with his wife, three children, and brother who is suffering from tuberculosis.

In 1990 Krishna Routh registered with the sub-regional employment exchange in Howrah. To this day he has not heard from them. Post marriage, he struggled to make ends meet and boxing gradually took a back seat. His efforts to find employment were futile. The Howrah Municipal Corporation was his only recourse. His father Mahavir had been a sweeper in the same civic body. After his demise, his mother became a permanent sweeper.

How does one usually complete their government related work in India? By standing in long queues for hours and darting from one officer to another. However, you can call it the fault in his stars, Routh has had absolutely no respite for the past decade. He has approached the government several times. He gave numerous interviews, and wrote umpteen number of times to them. But what happened? He only returned home empty-handed. To make the matter worse, he underwent a period when he stopped receiving his daily wage of a meager Rupees 232. He was unable to earn his family a square meal and kept drowning deeper in his debts.

Despite leading a miserable life, Krishna Routh has lost no love for the sport. He gives boxing lessons through the Howrah District Boxing Association to almost 60 boys in the locality together with his former coach Tapan Kumar Basu. He only charges them Rs 200 a year primarily for equipment like boxing gloves, punching bags, and sandbags for practice. Moreover, his boys don’t let him down. He states that his boys have been consistently winning and if he had a permanent job, he would not be insecure, and he could focus solely on coaching with even greater passion. A two-time boxing champion, Krishna is a local icon.

When he started off as a boxer, his only dream was to win an Olympic Gold for India. But courtesy the shambolic treatment by the government, Routh dreams of a day when he will be a permanent sweeper at the corporation. If this dream becomes a reality, then salary will be handed out on a fixed day. Moreover, he will be paid for each day of the month. Unlike his dismal present when national holidays are days of dejection rather than celebration as no work means no pay. Even if he wishes to, he cannot work on national holidays.

ARE WE ACTUALLY SURPRISED?

This phenomenon, of national champions turning into government workers, is not new to the country. Most of our athletes are in a condition as bad as Routh’s. It is heart-wrenching to witness the appalling treatment they are being subjected to by the country. They anyway fight for their lives to get to that stage as they aren’t being provided with enough funds and facilities. Moreover, such reasons reduce them to nothing post retirement. It is high time we start giving them the treatment they deserve. If we can’t nurture talent, then we should probably not expect anything from them. The hypocrisy at the show here is infuriating.

Shivansh Gupta
Sports journalist working towards bringing unsung heroes of Indian sports into the limelight and helping them grab the attention and respect they deserve. A foodie and a sports fanatic since childhood, Shivansh would prefer watching an old match (from any sport) over a hit movie or series. Shivansh has spent his formative years in Tanzania before shifting to Pune for college
Previous articleVideo Games vs Sports
Next articleINDIAN FOOTBALL’S LOST PEARL