The crowd of Ahmedabad witnessed one of the shortest test match ever played in the history of world cricket. The Pink ball test between India and England was one of the quickest since 1935. The match lasted merely 2 days and 844 balls.

The local boy Axar Patel took 11-wickets at the newly built Narendra Modi Stadium. India overruled England by 10 wickets within 2 days. This loss ended England’s hopes of making it into the final of the inaugural W.T.C in June. It was England’s lowest Test score in India.

Openers Rohit Sharma (25) and Shubman Gill (15) scored the winning runs for India (7.4 overs). India’s 2nd innings lasted just half an hour. It was the 3rd test in a 4 match series. India is now leading by 2-1. 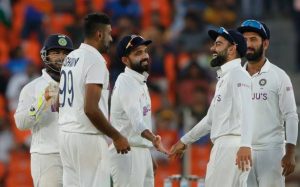 The shortest Test match in the history of cricket occurred in 1931/32. It was between Australia and S.A in Melbourne (656 balls). At Motera it lasted 844 balls.

It was India’s second Test victory within 2 days. The last time India won within 2 days in a Test was in 2018. India beat Afghanistan in Bengaluru. Whereas England’s previous Test loss in 2 days was in 1921 against Australia.

Spinners ruled the game. Turning pitch made life difficult for batsmen. In total 27 wickets were taken by the spinners– highest by spinners in a D/N Test. Team England seemed helpless in front of Axar and Ashwin. The duo limited England to 81(2nd innings). Setting a target of just 49 for India.

Patel took 5 wickets in the 2nd innings. And 6 in the first. Totaling 11 in a match. He now has three 5-wickets hauls in his 1st 4 innings.

Ashwin crossed the 400-wicket mark in the longest format. He became the 4th Indian to achieve this record. Earlier Anil Kumble (619), Kapil Dev (434) and Harbhajan Singh (417) achieved the feat. Ashwin got his 400 wickets in 77 Tests. The 2nd-fastest ever.

Facts from the match

With this victory, the men in blue is leading the W.T.C’s point table. In 6 series India has registered 11 wins, 4 defeats and 1 drawn.

Aditya Mishra
Aditya Mishra is currently working as a head of content and manager at KreedOn. He is an ardent defense enthusiast and was a SSB aspirant (SERVICE- SELECTION-BOARD) during his college days. Moreover he has represented his state of C.G in All India Senior National Athletics Championship (Lucknow) and winner of several state athletics tournament (400m). Aditya did his PG Diploma from the prestigious Indian Institute of Mass Communication. With a vision to bring substantial change in India's sporting ecosystem, he along with his team are working for the development of Indian athletes.
Previous article
Motera Stadium renamed after PM Narendra Modi – Its Huge!!
Next article
Khelo India Games | Gulmarg: The New Capital of Winter Sports

Sachin Tendulkar recalled warning young teammate: ‘If you do this again,...