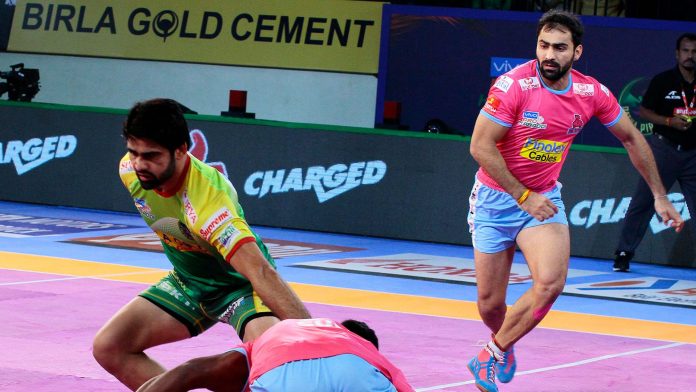 Those 11 raid points scored by Pardeep Narwal made a huge difference in the end as Patna Pirates comfortably beat Jaipur Pink Panthers by 41-30 in the Inter-Zone Challenge Week at the Patliputra Sports Complex in Patna. More importantly, two records were scripted by the home side as Anup Kumar surpassed 500 raid points in VIVO Pro Kabaddi whereas Narwal became the leading Super 10 scorer in PKL’s history.

The match started with Anup Kumar on the cusp of becoming just the 6th player to reach the 500 raid points milestone in the league, a feat he achieved in just 6 minutes. The early moments were closely fought as both teams exchanged points when in the 5th minute, Narwal got the match’s first Super Raid to put Patna Pirates in a commanding lead of 5-3.

Kumar responded by a Super Raid of his own to retrieve the lead back for Jaipur Pink Panthers at 6-5. The routine of exchanging leads continued thereafter until the scores were level at 8-8. It was Narwal who struck again with his second Super Raid of the day in the 9th minute. In the process, he got rid of Anup Kumar, Ajinkya Pawar, and Mohit Chhillar as Patna Pirates regained their lead.

He continued to inflict pain for the visitors with his raid, as Narwal put the game’s first All-Out. In an intelligent touch, he got Deepak Niwas Hooda after Amit Kumar had stepped out of the playing zone. The Pirates now possessed a 6-point lead as the scores read 15-9.

The two teams continued to get points at regular intervals. There were only two Do-or-Die raids in the 1st half, of which the second raid witnessed Pawar tackled by Jaideep to increase Patna Pirates’ lead to 7 points. Thereafter, Narwal got Dhull ‘s touch near the finish, to end the half with 9 raid points.

The last point of the first half went Jaipur Pink Panthers’ way courtesy of a bonus point from Ajit Singh to reduce the difference to 7 points with the scores locked at 22-15.

Patna Pirates started the second half in a strong fashion as Jaideep tackled Ajit Singh. Jaipur Pink Panthers scalped 5 points to start hopes of a comeback.

But one man that stood between their return was captain Narwal. He got a touch point off Hooda in the 7th minute to get to a record-breaking 33rd Super 10 in PKL. That feat seemed to give momentum to his team. Pirates increased their lead to 5 points with the scores reading 26-21. The hosts started getting points in a hurried fashion after clinching a second All-Out for the Jaipur Pink Panthers.

Kumar tried to help his team to stage a comeback with a Super Raid to decrease the deficit to 9 points. But Pirates’ Jaideep stopped him from doing further damage with a tackle on Kumar in the 15th minute.

As Patna Pirates scored points at will, Jaipur Pink Panthers still managed to retrieve 4 points in quick succession. Kale, however, put the cherry on the cake with a Super Tackle on Hooda. His efforts helped Patna Pirates take the win and move to the second spot in Zone B.

KreedOn Network
We are a team of sports writers who research about sports in India day in day out. Please reach out to us in case of any specific requirement of digital services on [email protected] .
Previous articleDisappointment for India as Saina, Sindhu, Srikanth crashed in French Open Quarterfinals
Next articleFrench Open Update: Satwik-Chirag Are the 1st Indian Men’s Pair to Enter Super Series Semifinals