Parupalli Kashyap Biography: A Classic Example of Why Simplicity & Will Power Can Never Go Out of Style

From playing badminton as a hobby to become one of the most well-known faces in the Indian badminton scene, Parupalli Kashyap, a world-class badminton player, for sure has come a long way. Today, he has become a force to reckon with, on the international circuit. His historical entry in the quarterfinals of the 2012 London Olympics, catapulted his fame instantly. His medal tally boosts a Commonwealth Games gold medal as well. What makes all these achievements all the more special is, Kashyap’s fighting, making a subsequent victory over asthma, and marking his way all the way through.

Parupalli Kashyap’s life story is equally happening and inspiring. Let us take through into the life of this champ! 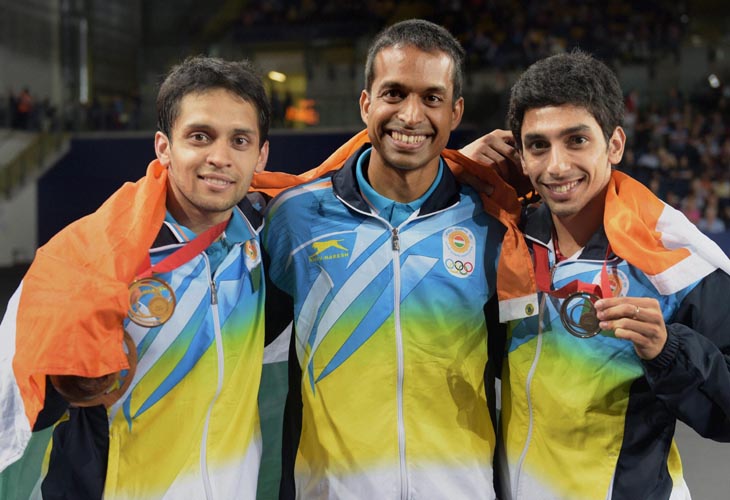 How It All Began

Kashyap first started playing badminton recreationally in 1997. He was just an 11-year-old child then and tried his hand at badminton during a summer camp. But the hobby soon turned into a passion and eventually a dream! Kashyap took first baby steps into the badminton world with the guidance of Dronacharya awardee and Padma Shri S.M. Arif. Later, he moved to Bangalore and trained at the Prakash Padukone Academy for three years.

Another badminton champion coached him after his Bangalore stint. It was none other than the legendary Pullela Gopichand, who helped Kashyap master the game. With three champions helping him hone his skills, it isn’t surprising that Kashyap has become a champion himself!

READ| 5 Most common badminton injuries and how to avoid them

Everything was going well for our budding badminton champ when out of the blue, he had to deal with a terrible blow. When he shifted to the Pullela Gopichand Academy in Hyderabad, he was diagnosed with asthma. This happened in the year 2004 when Kashyap was all set for a dream run.

“It was a big shock for me. Many thought my career was over. But I was determined to fight back and put in a lot of hard work to overcome the disorder,” Parupalli told in an interview with The Times of India.

He used to get sick all the time, but never realized he had asthma. His stay in Bangalore aggravated the condition. With timely treatment and regular care, Kashyap recovered. Of course, it wasn’t easy. His life changed completely. Inhalers and breathalyzers have become the most important items in his kit now. It is all right if he leaves his house without his shoes or even his racquet, but never without his inhaler.

Another challenge is to get a Therapeutic Use Exemption certificate every year. The struggles were many, but Kashyap was determined. In a way, asthma made him stronger and increased his willpower. He wasn’t ready to let a setback compromise his life-long dream.

“Basically, people with asthma have to keep on working on endurance. You can’t build it up and stop working on it for a while, like the others. My endurance goes down if I don’t work on it. So I do endurance workouts even during tournaments when other players don’t,” Parupalli told the DNA.

The Incredible Journey of Parupalli Kashyap

In 2005, Kashyap won the boys’ singles title at the National Junior Open Badminton Championships. He announced his arrival at the badminton podium in style with this victory.

Kashyap started playing professionally in 2000 and has been a member of the national team since 2006.

He played many international championships in the next few years. He broke into the top 100 and reached the 64th position by defeating world number 19, Przemysaw Wacha, in 2005.

Parupalli Kashyap was a runner-up at the Spanish Open in 2009. At the 2010 Commonwealth Games, he couldn’t win an individual medal, but he was a part of the silver medal-winning team.

READ |7 Basic Badminton Skills You Can Learn Without Coaching

In 2012, Kashyap was very close to fulfilling his Olympic dream. He reached the quarterfinals of the London Olympics and became the first Indian-male badminton player to achieve the feat, then. However, his dream was shattered when he lost to top-seeded Lee Chong Wei in the quarterfinals.

Golden Turn at the Glasgow Games

In 2014, Kashyap won the Gold medal in men’s singles at the Commonwealth Games. The medal brought a lot of cheer all over the country. It gave Kashyap a much-needed morale boost as 2014 wasn’t a great year for him otherwise. After an intense competition in various stages, he dashed into the finals and defeated Derek Wong of Singapore to bring the glittering gold.

“We know how much pain and suffering he had to undergo because of the asthma problem. There was a phase when that threatened his career. But sheer grit, support from everyone and by God’s grace, Kashyap overcame all that and is now a champion player,” Parupalli’s proud father told The Hindu.

Unfortunately, Kashyap missed out on his Olympics dream once again as he had to undergo knee surgery in 2016. He couldn’t participate in the Rio Olympics.

“Olympics is over for me. My dream of winning an Olympic medal is shattered. But injuries or not in mind, I cannot forget the support that Olympic Gold Quest is offering. They have done a lot and are doing for me,” a heartbroken Kashyap told the Times of India.

Commonwealth Games champion Parupalli Kashyap clinched his first international title in over three years by winning the Austrian Open International Challenge by defeating Malaysia’s June Wei Cheam in the men’s singles final. The Austrian Open results have bought a wave of joy for all the Indians.

Though the exact net worth of Parupalli Kashyap is not known, his career earnings are quite high. He was awarded cash prizes by the government after his golden run at the 14th Commonwealth Games. 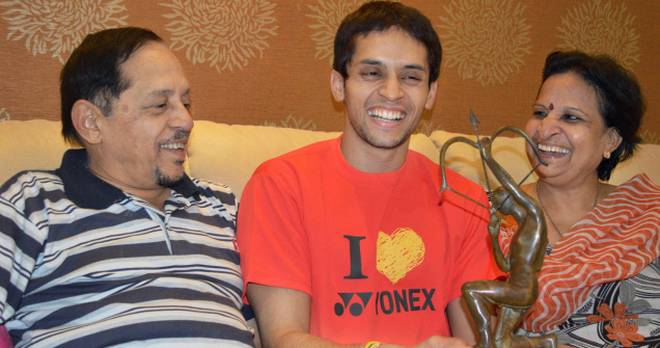 Parupalli Kashyap with his family

Kashyap’s parents, Uday Shankar and Subhadra, are from Guntur. His dad, Uday Shankar, had a transferable job, so he traveled a lot. Hence, Kashyap has grown in various places. He is very close to his parents and they have supported him in each endeavor. There were times when his father couldn’t be present to physically support him due to work constraints, but he was always morally with Kashyap.

Kashyap also had a sister. In a very tragic incident, she committed suicide in Bangalore. It was a very difficult time for the family. Together, they somehow recovered from the emotional distress and in a way became closer than before.

Match Made in Heaven: Parupalli Kashyap and Saina Nehwal 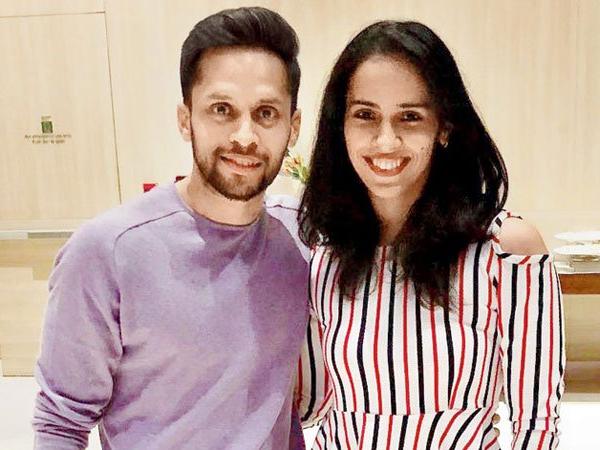 Saina Nehwal and Parupalli Kashyap have supported each, both on and off the field, for years now! Image Source: mid-day.com

Parupalli Kashyap first met Sania Nehwal at the Pullela Gopichand Academy. They have been dating for almost a decade now and are set to get married on December 16, 2018, at a private ceremony. Both families are excited about the wedding and preparations are in full swing. Kashyap and Nehwal are the new power couple of badminton!

Both Parupalli Kashyap and Saina Nehwal knows how to balance his career and personal life. The couple has redefined badminton in India and supported each other through ups and downs.

Parupalli Kashyap is very close to his mother. Here, he shares a candid moment with her!

Happy to meet you bro .. enjoyed so many of ur innings for #teamindia . Good luck for the future. And more of our conversations about training hehe kill it in the yoyo test ? @sureshraina3

Kashyap with cricketer Suresh Raina. We love the bromance!

Bang! Awesome start to this year’s @pblindialive with the win against the defending champions @chennai_smashers . More importantly 4 points . Off to Delhi now. @warriorsawadhe

Thank you @roundtableindia . Honoured and humbled to receive the Achiever Award at the #prideoftelanganaawards . Congratulations to @RTIndia_ngo for the work they’re doing across India . Thank you @shravyavarma for styling me 🙏😘. A handloom suit – wow ! pic.twitter.com/h96SKhPbsl

Parupalli Kashyap as a well-known and talented badminton player has time and again proven that physical constraints or limitations can be conquered with immense willpower. Every time he was falling off, he bounced back stronger. This quality makes him a true champion! We wish him all the very best for a chapter of his life and hope that he continues bringing joy to all badminton fans. Cheers!

Mamta Thatte
A passionate foodie, a versatile writer, and now a sports enthusiast, Mamta is always open to exploring new avenues. She has a vast experience in Web Content Writing, Editing, and Social Media Management. A self-confessed coffee and dark chocolate addict, she believes in following her heart and giving her 100% into everything she does.
Previous articleIt was an ODI, not a T20 match: India Packed Up Windies for Just 104 Runs to Win the 5-Match Series
Next articleHall for the Wall: Rahul Dravid Becomes the Fifth Indian to Make It in the ICC’s Hall of Fame

Senior National Championships: Saina to Fight it Out Against Sindhu

A Comprehensive list of GOLD medal winners at CWG 2018 for...

Prannoy and Saina to lead India’s charge at the 2018 Thomas...