He is kabaddi’s costliest player but his humility and simplicity will defy that status. In an era where quick success and financial abundance come with equal amount of attitude, he stands out with his unassuming nature and down-to-earth behaviour.

Yes, you guessed it right, we are talking about kabaddi’s rising star – Nitin Tomar! In a very short period of time he has proven that he is a valuable addition to any team he represents. Whether it was the Kabaddi World Cup or his numerous exploits in Pro Kabaddi League, he has always contributed proactively to victories.

Today we explore his life story and some very interesting facts of his life. 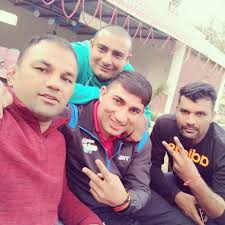 Tomar is a complete family man. He is very close to his mother and sister. His camaraderie with his brothers is also very heart-warming. Nitin Tomar comes from a wrestling family. Two of his uncles are wrestlers. Tomar was also looking at a career in wrestling as a child. However, his village didn’t have any infrastructure for wrestling. Though his village has produced quite a number of wrestlers, Tomar didn’t find the right opportunities to develop his talent. However, he did find his calling in kabaddi. His upper body strength helped him gain an upper hand and he took to kabaddi just like a fish takes to water.

Tomar worked as a petty officer in the Indian Navy. He was a part of the INS Angre unit. This is where he met coach Naveen Kumar, who played a major role in his development as a kabaddi player. Kumar helped him sharpen his skills.

Nitin Tomar came into the spotlight during the junior championships. He won the gold medal for Uttar Pradesh when he was just 16 years old. The Kabaddi star made his Indian team debut in 2016 at the Kabaddi World Cup. He played an instrumental role in the final victory of the team against Iran. He made six raid points and impressed one and all.

“I was sitting with my friends and watching the auction live and while I was unable to believe what had happened, the look on my friends faces was even more shocking and, frankly, funny. Their jaws had dropped and there was complete awe,” Tomar told The Hindu in an interview.

Everyone in his hometown and family was very thrilled. The family celebrated the milestone together and his nana-nani were the happiest. Tomar wants to develop his family’s agricultural land with the money and also pay for his sister’s wedding.

The down-to-earth player wasn’t carried away with the money and realised that his responsibilities will increase as well. In the same interview he concluded by saying,

“But even if I had not got so much, I would have still given my best. That I have been picked up by my home state franchise only makes it better. On the court only performance matters, money doesn’t play.”

In the first two seasons of the league, he was a part of Bengal Warriors and Puneri Paltan teams.

Though his base price was INR 20 lakh, Tomar was auctioned for more than 90 lakh in the PKL 2017 edition. He entered the prestigious crorepati club in 2018 as he was retained by the UP team for INR 1.15 crore. Tomar is one of the costliest players in the league. He owns several cars and bikes, agricultural land in his hometown, and a bungalow as well.

With great power comes greater responsibility, and Nitin Tomar is absolutely aware of it. After his success in PKL he has become a cherished player and he wants to live up to the hype through his performances. With this attitude and his talent, Tomar is sure to reach great heights. We wish him all the best in this journey.

The best classroom in the world is at the feet of our elders pic.twitter.com/AAsjVyhSEG

Your wishes really touched me and made my birthday all the more special. #prokabaddi #PuneriPaltan #kabaddi #gheuntak

Mamta Thatte
A passionate foodie, a versatile writer, and now a sports enthusiast, Mamta is always open to exploring new avenues. She has a vast experience in Web Content Writing, Editing, and Social Media Management. A self-confessed coffee and dark chocolate addict, she believes in following her heart and giving her 100% into everything she does.
Previous articleTop 9 Fastest Stumping Moments in the History of Cricket Eever
Next articleFormer Indian Captain among three commentators for Cricket World Cup

The Indian Olympic Association (IOA) said on Monday it didn’t sanction any visit for the kabaddi team to Pakistan for a world-level tournament. An Indian...
Read more
Athlete Profile

The most impressive thing about cricket is that anyone can make it big in the game, provided one has talent and passion. Many would...
Read more
Athlete Profile

Cricket's transformation to coloured jerseys happened in the late 1980s. And since then, without much debate and respecting every great ODI cricketer, no jersey...
Read more

Aditi Chauhan Biography: A Woman Footballer Living Her Dream and How...