The biggest cricket extravaganza, Indian Premier League is back. The proceedings for the tournament started with IPL player retention 2018, where each franchisee secured their top performing cricketers from the existing squad.

The IPL player retention 2018 is the first step towards the franchises reforming their squads ahead of the 2018 IPL player auction. After the 2017 tournament finished, which was the 10th IPL, the existing squads were disbanded, apart from the players retained by the teams.

Former India skipper Mahendra Singh Dhoni will once again be seen in his favourite yellow jersey in the 2018 season of Indian Premier League’s. The Chennai Super Kings retained their ‘Thalaiva’ along with Suresh Raina and all-rounder Ravindra Jadeja. MSD is retained for Rs 15 crore while Raina and Jadeja were kept for Rs 11 crore and Rs 7 crore, respectively.  The CSK franchise is back into the IPL fold after serving a two-year ban, and has two Right-to-Match (RTM) options left. They use this clause during the IPL auction on January 27 and 28.

Rajasthan Royals were also suspended for two years. They retained Australia skipper and world no 1 test batsman Steve Smith for Rs 12 crore. Surprisingly star Indian batsman Ajinkya Rahane was not retained and goes back into the auction pool.

The other surprise as already mentioned was in the form of Gautam Gambhir. He was sent into the auction pool despite guiding the Kolkata Knight Riders win the tournament twice in 2012 and 2014. The Shah Rukh Khan-co-owned franchise decided to retain West Indian duo of Sunil Narine at Rs 8.5 crore and Andre Russell at Rs 7 crore.

The Delhi Daredevils franchisee retained the young Indian duo of Rishabh Pant at Rs 8 crore and Shreyas Iyer for Rs 7 crore. They also secured the service of South African all-rounder Chris Morris at Rs 7.1 crore. The Delhi Daredevils have roped in Aussie legend Ricky Ponting as their head coach. Ricky was instrumental for Mumbai Indian winning the league thrice.

IPL Player Retention 2018 – MI has all they want 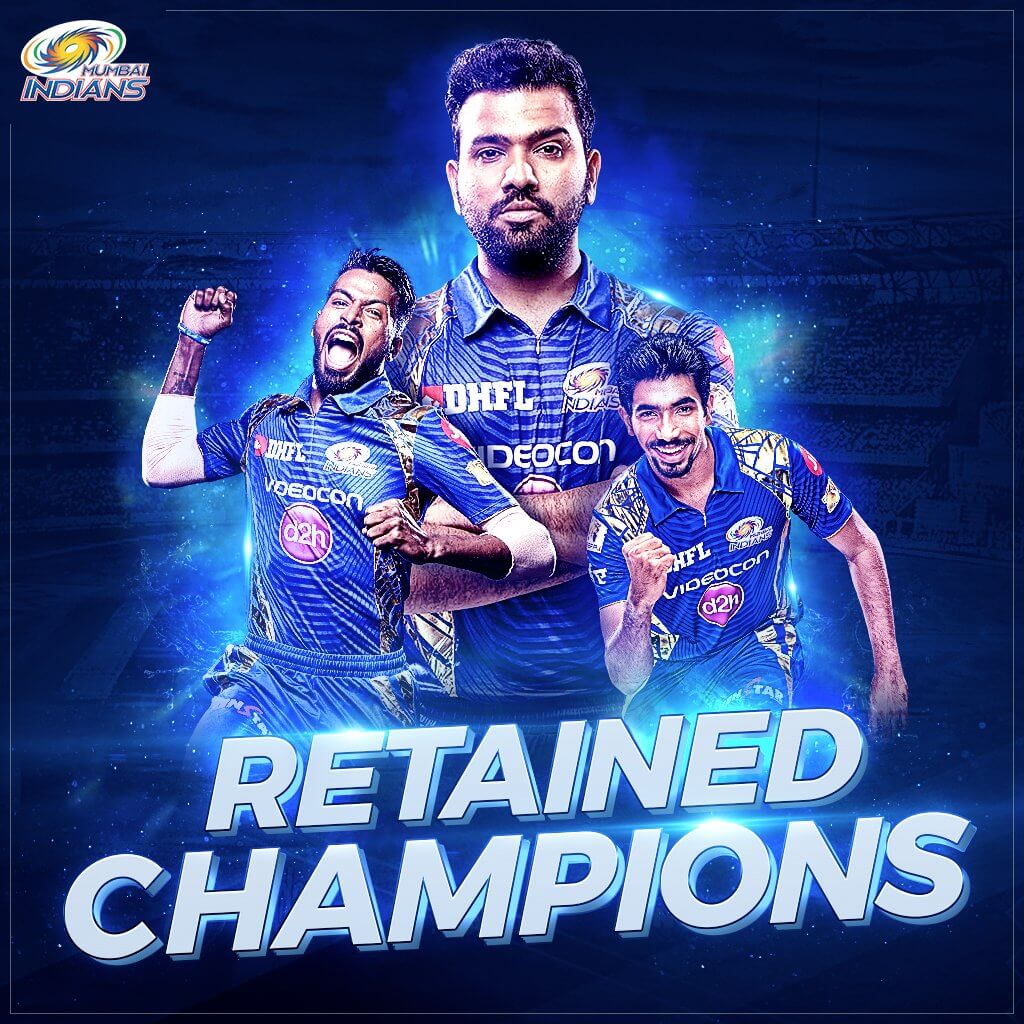 IPL Player Retention 2018 – Time for Hyderabad to rise and shine 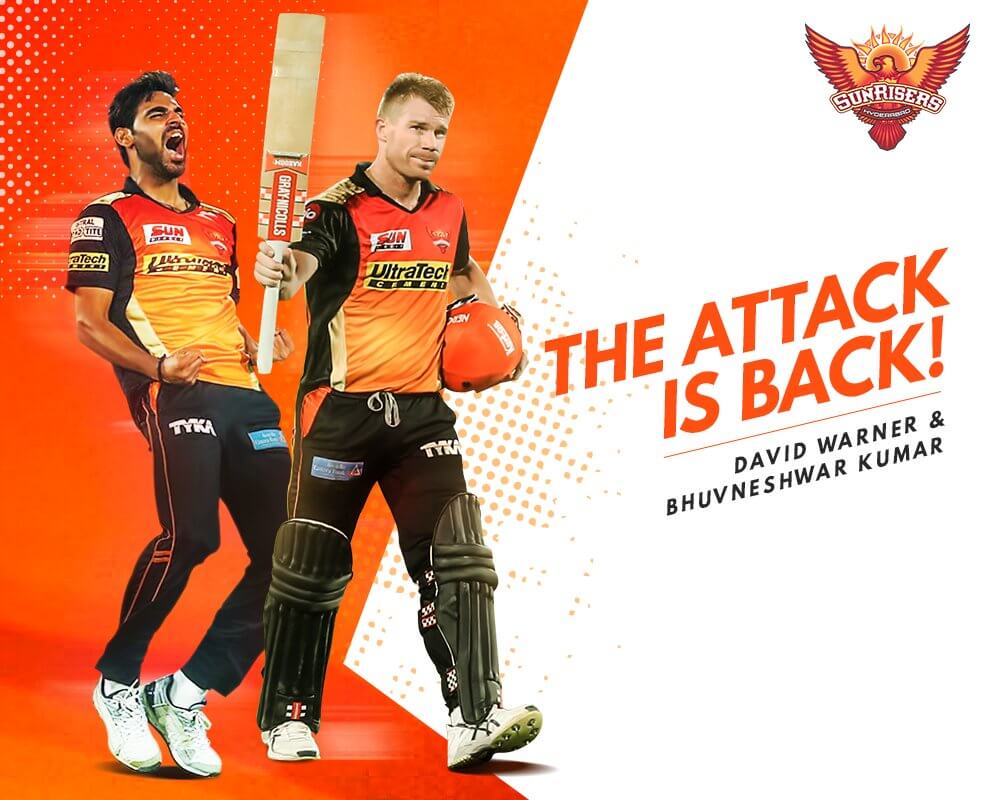 The worst performers in all ten seasons on aggregate, Kings XI Punjab retained only one player. They secured left-arm spinner Axar Patel for Rs 6.75 crore at the ILP player retention 2018.

According to the rules laid down by the IPL Governing Council:

A right-to-match card (RTM) gives the franchise an opportunity to buy back its player during the auction by matching the highest bid made for the player by another franchise, once the bidding is over.

For example, if Kolkata Knight Riders decide not to retain Gautam Gambhir as one of its three players, and Delhi Daredevils make the highest bid for the Indian batsman in the auctions, KKR can retain him using a RTM card.

Retaining Virat was a no-brainer for the RCB think tank, but it turned out to be a costly move at Rs 17 crore. However, retaining Virat means more or less assured performances.

The Indian captain was in tremendous form in 2017, scoring 2818 runs across all the formats for India, before flying off to Italy with Anushka Sharma to tie the knot.

Virat has played for the Bengaluru franchisee since the inception of the league. He has hammered 4418 runs from 149 matches, at an average of 37.44. Virat also became the fastest player to reach 4000 runs in IPL history. And who can forget the 2016 season, when he smashed 973 runs including four hundreds at an average of 81.08.

The Delhi franchisee paid an astonishing Rs 16 crore for the rumbustious all-rounder back in 2015. This made him the record buy in the history of the IPL at that time. If you remember, he was also got the most expensive player tag when RCB paid a 14 crore to get his services. But they released him the following year because of his bad form and fitness.

Yuvraj in the IPL player retention 2018 process is released by the Sunrisers from Hyderabad. He is also out of the Indian set-up and is struggling to pass the Yo-Yo Test. We will have to see how much amount he fetches in the auction on January 27.

Thala Dhoni is back where he belongs. The former Indian skipper in the IPL player retention 2018 was secured by the Chennai franchisee for Rs 15 crore. This makes him the third most expensive player in IPL history.

‘Thala’ Mahi’s return has got the CSK fans excited. Dhoni has led CSK to two trophies and four finals during the eight years of the tournament they participated.

MS played for the Rising Pune Supergiant in the last two seasons. He has scored 3561 runs from 159 matches in all IPL games and hit 17 fifties.

His form in the shorter formats was questioned toward the end of 2017. But in true MSD style he played crucial innings against Sri Lanka in ODI and T20s and put the naysayers at bay.

The Mumbai franchisee owned by the Ambanis retained their captain for the same amount as CSK did with MS Dhoni, Rs 15 crore. This makes him the joint third most expensive IPL player ever.

Retaining the ‘HIT-MAN’ was a no-brainer for Mumbai just like Kohli was for RCB. Rohit has led the team to three IPL titles in 2013, 2015 and 2017, which is till now the most by any team.

The Mumbaikar has been playing for MI since 2011 and took over the captaincy in 2013 and has never looked back since.

Sharma, in all IPL matches has scored 4207 runs from 159 matches with one hundred. Rohit along with Hardik Pandya and Jasprit Bumrah will form the core of the squad.

The only non-Indian on the list, Ben Stokes was the star-attraction in 2017’s IPL auction. His base price of Rs 2 crore and was expected to go big and he did. All eight franchises were after him and there was an aggressive auction between Mumbai Indians (MI), Royal Challengers Bangalore (RCB) and Delhi Daredevils (DD).

Even, Sunrisers Hyderabad joined in the battle, but he was bagged by the Rising Pune Supergiant for an enormous fee of Rs 14.50 crore. Ben became the second costliest player in the history of the IPL auctions behind Yuvraj Singh.

The mercurial all-rounder didn’t disappoint his buyers. He scored 316 runs and 12 wickets from 12 games for the RPS. He guided Pune to the qualifiers and before joining national duty.

The English cricketer is expected to go big as all-rounders of such caliber are going to come far and wide. The franchisees will jump on the opportunity of having him on their side. And you never know he may even pass Virat Kohli in terms of the most expensive player.

Vardan Pandhare
Vardhan is an author who loves creativity. He enjoys experimenting in various fields. After completing his graduation, he was sure about one thing! His love for sports. He is now living his dream of being creative with words in the field of sports. He has since then always brought the latest news and updates for all the sports fans.
Previous article7 Indian Players Sports Biopic you don’t want to miss!!!
Next articleIndian Olympic Association – The Premier Sports Governing body of India

Must Watch: Roar of the Lion – MS Dhoni Unveils Rise,...