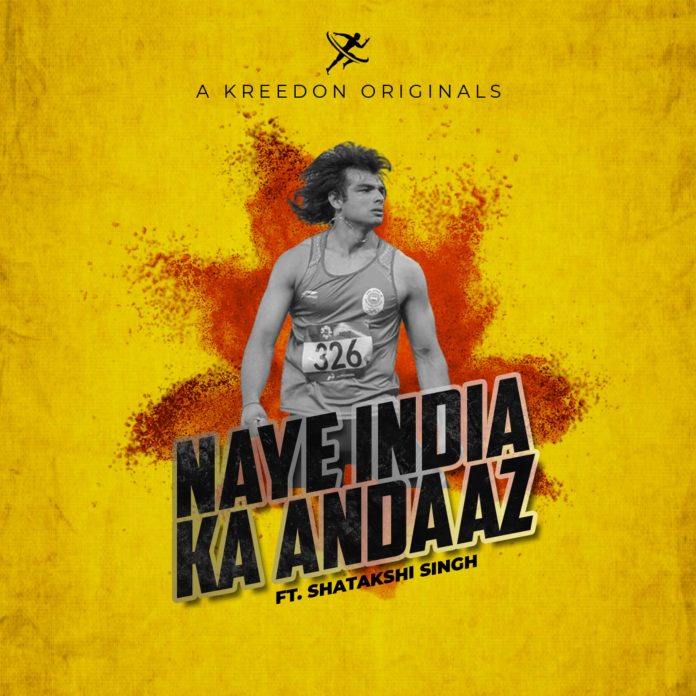 “From hating physical activity to shining at Olympics”. The journey to success is not easy for anyone, it comes after a lot of failures and hard work. This is Neeraj Chopra story – “The Golden Boy”, an Indian javelin thrower.

In this fourth episode of the Hindi podcast series, Naye India Ka Andaaz, we tell the story of Neeraj Chopra and his journey into sports. An overweight boy who never imagined representing the nation at the biggest sporting event in the world and creating history with every throw.

Naye India Ka Andaaz is a dynamic platform and an initiative by KreedOn to bring in light the inspirational stories and acknowledge our ever glorious and prominent sports heroes from past to present through the medium of most captivating podcasts. We bring you fascinating stories, spontaneous conversations, and meticulous analysis based on relevant data. We aim to motivate and inspire the Indian youth to build a strong sporting nation by raising awareness about Indian sports. Thus, Sports is a strong medium to unite the country and influence the young generation.

The Golden boy, Neeraj Chopra is an Indian track and field athlete who won a gold medal at the Tokyo Olympics. He was born on 24 December 1997 and hails from a mediocre agrarian family of Panipat, Haryana. The chubby boy was the most pampered child in his family and he had never dreamt of becoming an athlete until he found his way to begin his weight loss journey. At 12 years of age, He weighed 90 kg and certain incidents changed his mind and instilled in him the will of fire. He gained inspiration from other athletes and his hard work turned out to be fruitful for him. His motivational life journey is no small wonder.

The making of Neeraj Chopra Story

In 2016, Chopra became the first Indian athlete to have a world record against his name. He won gold at the U-20 World Championships in Poland. He adjoined the league of legends by winning both the Commonwealth and Asiad golds. Neeraj was only the second Indian athlete to do so after Milkha Singh in 1958. In no time, he became Asia’s best as he won the Asian Championships 2017, in Bhubaneswar, by throwing a distance of 85.23m. He also competed in the prestigious IAAF Diamond League Events for the first time in 2017.  He struggled and grappled himself to better his personal best and be amongst the top ten Javelin throwers in the world. No sooner, Neeraj came back strong after training under legendary Uwe Hohn.

In his debut at the 2020 Tokyo Olympics, Chopra won the gold medal on 7 August 2021 with a throw of 87.58 m in his second attempt. As of 2021, he is one of only two Indians to have won an individual Olympic gold medal as well as the youngest-ever Indian Olympic gold medalist in an individual event and the only one to have won gold in his Olympic debut. He has been honored by several eminent awards. He is an inspiration for the young generation as well as the athletes looking forward to achieving their goals.

Neeraj Chopra has inscribed his name in the golden pages of history through his consistent motivation and desire to prove himself. He is an epitome of discipline and dedication. He worked hard to conquer his dreams to live the best moments of his life. Life gives many opportunities to prove oneself but it is you who has to take action and seize the moment. Don’t give up on your failures, learn from it and prosper in life as your fate depends on your actions.

KreedOn Podcasts is an initiative of ours to bring recognition to our present and past sports heroes. We aspire to do this through engaging storytelling, candid conversations, data-driven analysis, and much more. Through this audio medium, we want to inspire and build a strong community of the young generation in India. We want youth to follow, support and spread awareness about Indian Sports.

Send in a voice message: https://anchor.fm/kreedon/message

KreedOn Network
We are a team of sports writers who research about sports in India day in day out. Please reach out to us in case of any specific requirement of digital services on [email protected] .
Previous articleKreedOn Sports Buzz: FC Goa clinch the 130th Edition of The Durand Cup | Today’s Trending News in Indian Sports
Next articleRR Vs MI Dream11 Prediction Team | Rajasthan Royals vs Mumbai Indians Vivo IPL 2021 | Match 51 Fantasy Cricket Prediction | IPL predictions for today’s match