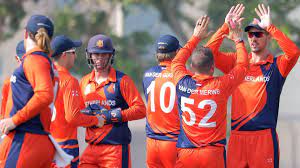 NAM vs NED Dream11 Prediction: The ICC T20 World Cup is going really well so far with yet another exciting match where Netherlands and Namibia will square off in the fifth game of the ICC Men’s T20 World Cup 2022. This Group A match will take place at Geelong’s Simonds Stadium. In their first game, Namibia faced Sri Lanka and shocked them with an unexpected victory. In contrast, the Dutch team’s T20 World Cup quest also started off with a victorious start. On Sunday, they played the United Arab Emirates.

In this blog, you will get to know the complete details about the squads of both NAM vs NED T20 WC, the weather forecast, the pitch report, the importance of the toss, the dream11 team by experts and much more.

Let’s look at the Dream 11 prediction for today’s NAM vs NED T20 match.

Key Players in Form in NAM vs NED teams

Weather conditions in NAM vs NED

The pitch at Simonds Stadium, which is used for the Big Bash, is occasionally sticky. As the game goes on, the pitch can become slower and offer aid to both bowlers and batsmen.

Scott Edwards: The Dutch captain apparently decided to get his squad through UAE, and he would try to repeat those efforts to bring his team to the Super 12, who is superb finisher after all.

Jan Frylinck: will be looking to shine against the Dutch side, who has decent stats in T20. Let’s see what he can do in this one.

David Wiese: Although David Wiese was not given the chance to bat, he nevertheless helped the Namibians win the match by taking two crucial wickets.

Jan Frylinck: The all-around bowler is renowned for his bowling skills as opposed to his batting. But against Sri Lanka, he demonstrated his value with both the bat and the ball and demonstrated how vital he is as well.

Bas de Leede: By collecting three wickets and contributing some runs, the crucial Dutch all-rounder helped his team defeat the UAE and win the game. In the upcoming games, he will try to repeat his performance.

Trumpelmann: Ruben Trumpelmann has the potential to take wickets at regular intervals and aspires to bowl on Australian surfaces.

Bernard Scholtz: is known for unsettling the hitters. He did the same versus Sri Lanka, and in that game, he was the best bowler.

Must pick for NAM vs NED Dream11 Prediction

NAM is the favorites to win this fixture, who are in full confidence after beating Asia cup winners 9Sri Lanka).