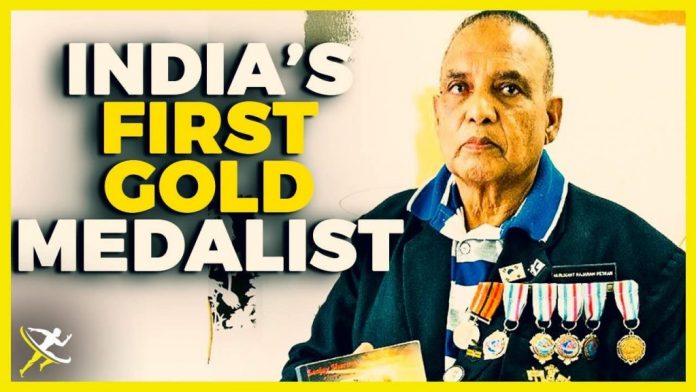 The stories of courage never fail to inspire us. In fact, they also make us realize how easy our lives are. Choosing a convenient way and settling into oblivion is easy. Fighting destiny at every step and reaching the pinnacle? Not so much! When stuck with an unfortunate incident, most of us tend to wallow in our sorrows. However, there are those that rise, just like a phoenix, and display immense courage and talent. This is the story of one such fighter, a brave soul who gave his country his all, not only on the battle ground but also on the sports field. This is the story of Murlikant Petkar.

A war hero who brought India her first-ever paralympic gold. A sportsman who inspired generations and continued his hard work without ever expecting anything in return. We are too small even to trace his footsteps; all we can do is find inspiration through his numerous life stories.

Murlikant Petkar was born on 1st November 1947 in the Peth Islampur region of Sangli, Maharashtra. Right since school days Petkar developed an interest in sports. He was particularly good at wrestling, athletics, and hockey.

he defeated the village head’s son in wrestling and had to face the wrath of all villagers. Hence, he ran away to Pune. There he enrolled in the Boys Battalion of the Indian Army in Pune and excelled at every sport. Over a period of time, he became a talented boxer.

Petkar started working as a jawan in the Corps of Electronics and Mechanical Engineers (EME) in the Indian Army. Very soon, he got an opportunity to represent the Indian Army in Boxing at the International Services Sports Meet 1964 in Tokyo.

After he was transferred to Secunderabad, Petkar started training to be armourer and preparation for Nationals began in full swing.

The following year changed his life forever. During the 1965 Indo-Pak War Petkar was posted at the Sialkot Sector in Kashmir.

He sustained multiple gunshots, was run over by a car, and even lost his memory. In fact, he has a bullet lodged in his spine.

In 1968, Petkar participated in table tennis at the Summer Paralympics and cleared the first round. He won four medals in swimming in total. In 1967, he became the Maharashtra State Champion in Shot-put, Javelin throw, Discus throw, Weightlifting, Table Tennis, and Archery.

The highlight of Petkar’s career was the gold he won in the 50-metre freestyle swimming event in the 1972 Summer Paralympics in Germany. With this achievement, he set a world record in the event clocking 37.33 seconds. Though the said event does not exact now, his record was never broken.

His victory brought India her first paralympic gold and captivated the attention of the entire nation. Moreover, he displayed immense talent in multiple games in the tournament by reaching the finals of javelin, precision javelin throw, and slalom.

In 1972, he began working in Telco, Pune where he is now at the post of Senior Assistant in the Public Relation Department.

Years of hard work, but hardly any appreciation did not deter Petkar. However, he has been representing the country at various levels and making each Indian proud.


Finally, it was in the year 2018 that he was honoured with the Padma Shri award.


A movie on Padma Shri Murlikant Petkar is in the works with talented actor Sushant Singh Rajput has been roped to portray his role on the big screen. The plan for the movie was first announced in 2017.

“The minute I heard his story, I was on. I wanted to do it without a second thought. What an inspiring story! After playing Dhoni, I’m looking forward to playing Petkar, who never allowed his physical hurdles to stand in the way of his dreams. I like playing characters who dream big,” Sushant said during the promotions of MS Dhoni

After #MSDhoni, Sushant is all set to play the role of #India's Paralympics Champion #MurlikantPetkar– https://t.co/9568bf9Qdd pic.twitter.com/LNr9jTwfqq

Petkar currently resides with his son Arjun and his family in Thergaon, Pune.

We r thankful to d Govt. of India for conferring Padma Shri to India's first #Paralympics Gold Medalist, Murlikant Petkar,1972 Summer Paralympics, in Heidelberg Germany. This recognition was long due & will go a long way in promoting d #ParalympicMovement in India. @Rao_InderjitS pic.twitter.com/QBE0cVwE5o

Mamta Thatte
A passionate foodie, a versatile writer, and now a sports enthusiast, Mamta is always open to exploring new avenues. She has a vast experience in Web Content Writing, Editing, and Social Media Management. A self-confessed coffee and dark chocolate addict, she believes in following her heart and giving her 100% into everything she does.
Previous articleThe Barefoot Skateboarders: Skateboarding Towards Change
Next articleAnnul Pale: A BMX Star Rises From The Slums of Mumbai